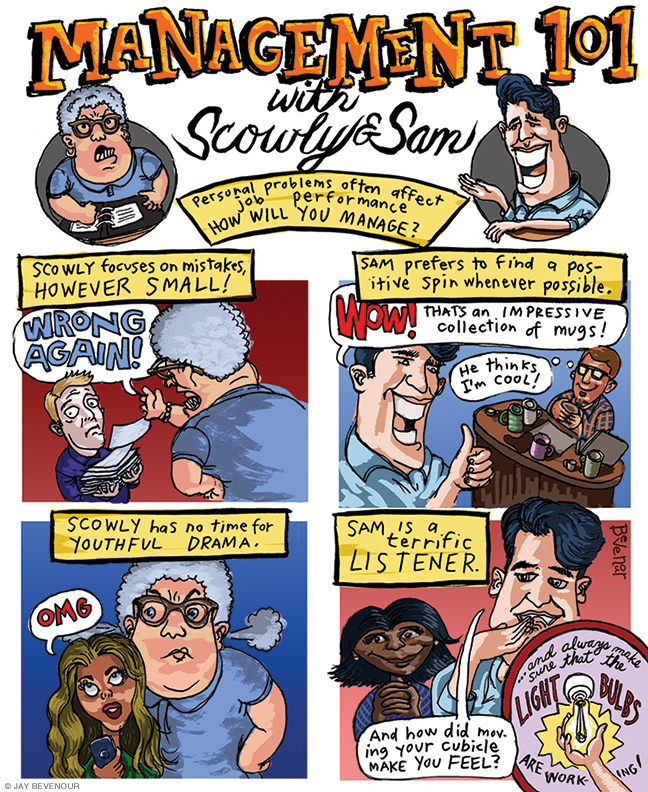 The best management lesson I got at Penn wasn’t in the classroom.

In 1989, as a freshman from a broken (and broke) home, I had to find creative ways to pay my tuition. My work-study grant called for me to put in 10 to 15 hours a week. Luckily, I was able to find a couple jobs in my dorm that allowed me to sneak in “study” along with the work. I nabbed a slot publicizing activities in Kings Court/English House. And I logged a few hours a week at the security desk, which paid $5.25 an hour, well over Pennsylvania’s $3.70 minimum wage. Since there was no card reader, all I had to do was nod approvingly at each dormmate who flashed a Penn ID. Sometimes I pretended to not recognize my roommate, which was good for a laugh—well, the first time.

Occasionally my security shift ended late on Friday and I had to bring timesheets across campus to an older female supervisor. She often frowned or huffed. “Can’t they be in, like, a folder?” she snarled at me once. “The top sheet is wrong again!” she hissed another day. Since I was delivering them the way I’d been told, I quietly slinked away—to dinner, or the DP office, or some party where my dormmates were quaffing warm cans of Keystone Light.

As I got accustomed to the work/study balance, I decided to start fulfilling my core curriculum requirements by taking “Intro” classes in disciplines I’d never tried. Some turned out to be stealth Wharton classes. It seemed like Intro to Sociology was secretly corporate sociology; it was taught by a Wharton management professor, and we learned which types of work environments made employees happier and more productive. (Hint: Good lighting goes a long way.) I also signed up for Introductory Legal Studies, which was really contract law. We skipped the criminal justice chapters in the textbook. I was actually grateful to learn something practical to go with my English major.

The lessons in business and management proved useful when, a decade later, I became a middle manager at 29. More specifically, I was an editor at a New Jersey newspaper chain, overseeing five reporters. Through trial and error I learned which questions to ask in interviews to make sure someone wouldn’t quit right after training, and how to train them on a learning curve so they wouldn’t get intimidated.

I also had to navigate the complexities of managing people with diverse personalities. As a shy writer, this was new to me. I thought back to my experiences as a low-level employee, including at Penn. I decided I’d never be like the surly supervisor who collected the time sheets. Instead, I’d be like a more recent boss, whom I’ll call “Sam.” Sam was among the owners of a small publishing company where I’d worked briefly after college. He would periodically pop into our offices unannounced and chat up every employee, no matter how low-level. He asked the security guards how their kids were, what their hobbies were, what they’d like to do within the company. For this, Sam was beloved. He was a millionaire with a doting wife and four kids—yet, he seemed to really care about us.

So as an editor, I pledged to be like Sam and not Scowly. I would ask my employees what was going on in their lives. I was full of youthful hope and enthusiasm.

I learned quickly that I was not one of the gang. When the reporters went out for drinks, they complained about their salaries. I couldn’t join in the griping since I was partly responsible for setting their pay. But there was a bigger divide: I was almost a decade older than the reporters, and I was dealing with new life issues they had yet to face. Though, like them, I was still single and childless, I struggled with a parent’s descent into mental illness, and I had another relative who was a step away from homelessness. Even our longtime family dog was entering her twilight years. (She was about to turn 14—or 7,000 in dog years.) I’d managed to sock away savings throughout my 20s, but I was shelling it out to help relatives with housing and medicine. Sometimes I spent my lunch hour calling motels in obscure towns to ask their weekly rates or begging a self-storage manager to let my sibling pay late. There was a limit to how much time and emotional capital I could spend on my fresh-faced employees.

Soon I found myself growling when they vexed me. If their assignments were sloppy or late, that meant more work for me. In low- or moderately paying industries like publishing, few people have extra time to spare.

One day, one of my employers started missing deadlines. Eventually, when I told her she was holding up production, she thundered at me, “You know my mother’s been sick, and you haven’t once asked how she is!”

She had mentioned the problem in passing, but I hadn’t sat down and asked how her mom was doing. Besides, I had similar issues. Yet if I’d talked to her, I could have anticipated how her problems might affect all of us, and perhaps lessened her load. We were also probably both following the old-school expectation of keeping personal problems out of the workplace.

I’m not sure this is realistic anymore.

Nowadays our parents live longer and require more years of care. The life expectancy of Americans born in 1920 was 55, but the Baby Boomers are currently expected to live into their mid-80s. Health care is more complicated now, and we no longer have three, four, or five siblings to spread out family burdens. I’ve often wondered how a waitress or construction worker, or anyone on their feet during a weekday, finds time to call their health insurance provider, their kids’ school, their parents’ doctors. Employers need to allow some leeway during the workday for personal issues.

A few weeks after the reporter yelled at me, another had a death in her family and took several days off. After four, then five days, she failed to respond to my messages asking when she’d return. This flabbergasted me. I would have at least sent some word.

But I also knew people still saw me as their boss—a supervisor with power over their pocketbooks—and perhaps they still didn’t feel they could trust me with their secrets. I vowed again to do a better job of being approachable. There was a learning curve to management. At least I made sure the light bulbs were working (which wasn’t about light bulbs anyway; it was about showing you cared).

I hadn’t become Sam. In fact, I’d become Scowly. But I had to give myself a break. Sam could afford to be affable. When his relatives got sick or teetered on the precipice of eviction, he had emotional support, money, and staff to help. I revised my goal: While I might not become exactly like Sam, I could listen more to those around me. I started to understand, as I hadn’t as a teenager, why people older than me (teachers, bosses) might huff at any disturbance. They didn’t have time for my teenage angst.

According to a 2013 article in Inc. magazine, a private research firm determined that 47 percent of employees believed their personal problems sometimes affected their job performance. The article suggested that bosses ask employees whether some of their stress was caused by work and “what steps you can take to alleviate it.”

These days, I tell employees during their first week of training that they should give me a heads-up if personal difficulties arise that may affect work. I also explain to new hires straight out of college that the consequence of being late with assignments isn’t merely a bad grade—it may prevent colleagues from dealing with their own workload and personal issues. It’s something they often seem surprised to have to think about.

Since I’ve been both the immature kid and the sour-faced boss, I’m trying to be more patient. Back when I was a freshman handing in sloppy timesheets, I should have realized Scowly was probably dealing with a whole sea of annoyances.

The best universities teach lessons big and small—like what constitutes an oral contract, how to triple-space a term paper to make it 10 pages, and that Keystone Light shouldn’t actually count as beer. From my Penn experience I eventually learned that if someone was difficult to deal with, they might be bearing burdens I couldn’t imagine. When Scowly made the comment about folders, I probably should have asked my supervisors to find one for next time—instead of thinking she should pull the stick out of her arse and smile.