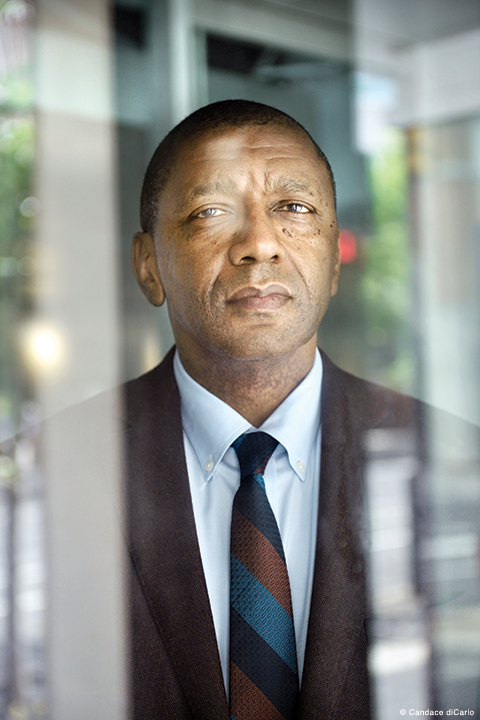 Howard Stevenson trains white and black Americans to notice and defuse racial stress, one face-to-face interaction at a time.

“How could a man lead an army to win freedom if he himself owned slaves?” A white fifth-grade teacher is reading aloud from Phoebe the Spy, a story about a young black housemaid who is trying to save George Washington’s life. “For General Washington did own slaves,” she continues. “It was said he treated them well. But still, they were slaves.”

On this afternoon, teachers at the Benchmark School, a private school outside Philadelphia, are undergoing an atypical sort of training: role-playing a discussion that had taken place in the classroom earlier in the school year between two students—one an African American girl, the other a white boy—during a unit on the American Revolution.

The teacher playing the part of the black girl points out that whether Washington treated his slaves well is beside the point. “They were property,” she says.

“I don’t know what the big deal is,” insists her counterpart, who is playing the part of the white boy. “It says he treated them well.”

The exercise is part of Howard C. Stevenson’s efforts to teach racial literacy. Intervention by intervention, he seeks to change the often damaging and at times deadly way racially stressful encounters can unfold—in the classroom and out in the broader world.

“Lessons around diversity or history can be a very traumatic event” for students of color, says the 59-year-old African American, who is the Constance E. Clayton Professor of Urban Education at Penn. But for white students, Stevenson continues in his soft-spoken, deliberate way, “it’s just another day in school.”

His audience of 40-plus teachers and administrators is overwhelmingly female and white at this first- through eighth-grade school for students with special educational needs.

As the teachers role-play, he gently guides the discussion. How can the conversation between the students go deeper? How can teachers illuminate the emotional experience of disagreement between students of different races in a way that fosters mutual understanding and empathy?

“How do I get to know somebody else’s world?” he asks the teachers, rhetorically. “It’s not easy. But you’re not in an easy job.”

Since arriving at Penn in 1990, Stevenson has focused his research on racial socialization and interventions. From the get-go, his approach has been practical—and hopeful.

“Racial literacy is the ability to read, recast, and resolve a racially stressful encounter,” he says later, in his office, the home of the Racial Empowerment Collaborative that he directs.

An office whiteboard is covered in phrases like racial empathy, racial coping, and theory of change. The bookshelves are replete with volumes that includeSlavery in America: The Montgomery Slave Trade and his own book Promoting Racial Literacy in Schools. One poster declares #HealGrowThrive—shorthand, perhaps, for America’s race-relations trajectory. Or at least a trajectory Stevenson hopes to help bring about.

Arguably, Stevenson’s work is more important than ever as the country struggles to grapple with white nationalist demonstrations in Charlottesville, Virginia, that left a counter-protestor dead; contentious debates over NFL players who kneel during the National Anthem to protest racial inequality and police brutality; any number of shootings of unarmed black men captured on smartphones or grainy video; and the recent arrest of two black men for not ordering anything while waiting at a downtown Philadelphia Starbucks.

Stevenson says he and his doctoral students are “overbooked” with requests for teacher training through his Can We Talk? program, which operates in several school districts, including Lower Merion and Cheltenham in Pennsylvania, and Binghamton in New York.

“When you have a culture that doesn’t talk about race [and] avoids race discussions, every time one comes up, it feels like the first time,” he says. That can prompt defensive, or worse, reactions from parties who stumble into a charged situation.

Stevenson’s mantra is practice, practice. “We try to put you in the position that stresses you the most, so you’re better prepared for it,” he says.

To that end, Stevenson nudges open a door he hopes more people would walk through. “The focus is on what happens in the face-to-face,” he says. “That’s different than a societal view of racism and problem solving, of discrimination and access to schooling or access to healthcare. Those are important issues. But we’d be interested in how the ER doctor treats you when you get into the emergency room, encounters between police and youth, walking into a neighborhood.”

Regardless of the venue, the goal is the same: Reduce the stress of all parties in order to coax a better outcome from a racially charged incident. Stevenson says it takes less than a minute and involves three steps.

First, read the racial encounter accurately—that is, acknowledge that race plays a role. “If you don’t see that racial element, that elephant in the room, you may not have a way to process that moment.”

Next, recast the stress. That requires assessing the level of one’s own stress, literally putting a number to it on a 10-point scale, and then identifying its location, whether a twitching shoulder or pounding heart.

High stress levels interfere with making decisions, Stevenson points out. “My brain is on lockdown,” he explains. “I don’t see very well. I don’t hear very well. I’m only interested in protecting myself.”

Studies also have found that black and brown men and children are perceived as physically larger, older, and closer than they really are, Stevenson notes—which can amplify the odds of an altercation. “I’ll see you up on me, when you’re really not,” he says. In a 2014 case in Cleveland, a police officer who fatally shot Tamir Rice while Rice played with a BB-gun said he thought the toy was a real weapon and the victim, an adult. Rice was 12.

Finally, one of the most difficult steps is the last: resolve. “In that moment, what would you say? What would you do?” Stevenson says. “I can believe in racial justice, but do I make a decision” that neither dismisses the racial aspect of the situation nor overreacts to it?

Over the years, the professor has taken these strategies to corner barbershops, basketball courts, and into families. He is always interested in objective measures of efficacy.

In one effort, Preventing Long-Term Anger and Aggression in Youth (PLAAY), he tried to help nine- to 18-year-old boys learn to navigate disrespect that leads to aggression and retaliatory violence, taking strategies used on the basketball court or in martial arts to the street. “We did a lot of role-playing on how not to curse out a cop,” he adds.

In another, SHAPE-UP, Philadelphia barbers were trained as health educators. In a randomized trial conducted from 2011 to 2016, the barbers used interventions that included mentorship over the course of two visits to the shop. At the three-month mark, physical fighting was reduced, says Stevenson, who is writing up the results with co-principal investigators Loretta Sweet Jemmott GNu’82 Gr’87, vice president for health and health equity at Drexel University, and John B. Jemmott III, the Kenneth B. Clark Professor of Communication and Psychiatry at the Annenberg School for Communication.

A new intervention—Engaging, Managing, and Bonding through Race (EMBRace)—shows promise in helping parents talk about racial trauma with their children and teach them how to survive, according to a small pilot study co-led by Riana Elyse Anderson, an assistant professor in the School of Social Work at the University of Southern California.

In the works is a collaboration with Doug Frye, an associate professor in the Graduate School of Education, and his doctoral student Kari Guo, in which a virtual reality experience for teachers will re-create a classroom conflict and allow the teacher to experience the incident from the point of view of the student of color. The success of racial literacy strategies would be tracked through bodily reactions, such as heart rate. One goal is to identify how much practice is needed to proficiently use the skills under difficult circumstances.

“We’ve gone back to very archaic ways of understanding race,” Stevenson says. “When you have leaders who use stereotypes as part of their racial message, we’ve gone backwards.”

At the same time, he sees a way forward in his work, particularly the efforts with youth.

“Saving the world [from systemic racism] is a lot harder,” he says. “But stress management around race is measurable. It’s hopeful. Young people can learn it, even if systems don’t.”