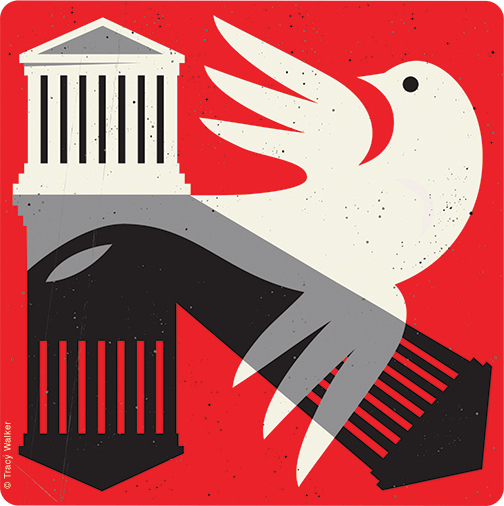 In 2018, the Supreme Court advanced a double standard that bodes ill for religious freedom.

This year, the Supreme Court decided two landmark cases on the meaning of religious freedom. In one case, it upheld a policy whose author had repeatedly, publicly, and unabashedly proclaimed his intent to subordinate members of a single faith. In the other case, it ruled against a civil rights commission on the ground that two of its seven members had made statements signaling insufficient respect for religion. Both of these decisions articulated the principle that government may not act on the basis of anti-religious animus. But they applied it inconsistently—and in ways likely to undermine rather than promote religious freedom in the United States.

First consider Hawaii v. Trump, the challenge to President Donald J. Trump W’68’s infamous “travel ban.” The evidence that this policy exists primarily to demean Muslims is overwhelming. Throughout the campaign and after taking office, Trump widely broadcast his belief that Muslims are dangerous and unwelcome. He explicitly said as much in numerous interviews. He also retweeted anti-Muslim hate videos, advocated a Muslim Registry, and promoted a (fictional) account of US soldiers executing Muslims with bullets dipped in pig’s blood. Well into 2017, his campaign website retained a promise to ban all Muslim migrants. And even after this text was removed, Trump’s senior advisors continuously and specifically associated the travel ban policy with the President’s anti-Muslim statements.

Ultimately, while Trump couldn’t ban all Muslim immigration, he could (and did) forge a policy in that same hateful spirit. Apart from Trump’s many direct admissions of illicit intent, the clearest evidence for this point is the glaring absence of any other objective that the travel ban actually achieves. Nobody with relevant experience seriously believes that the travel ban is a sound or sensible anti-terror measure. To the contrary, experts widely agree that Trump’s order imposes arbitrary restrictions and makes America less safe.

Shortly after Trump issued the second version of his travel ban, the State of Hawaii filed suit. It alleged that Trump’s policy violates the Establishment Clause, which prohibits official action motivated by animus toward any religion. Hawaii’s claim was compelling. Although the travel ban proclamation did not explicitly reference Muslims, Trump had willfully used his bully pulpit to generate a widespread public understanding that his order targeted Muslims for stigma and exclusion. It would seem absurd—and dangerous—to pretend that those statements never occurred. If the President’s words mean nothing in court, even as they mean everything to those affected by his policies, then judicial legitimacy and the rule of law may falter.

Nonetheless, the Supreme Court sided with Trump. Writing for a bare conservative majority, Chief Justice John G. Roberts Jr. asserted that deference to the president on matters of immigration and national security required the Court to blind itself. In his telling, Trump’s policy had to be upheld if there was any rational basis apart from anti-Muslim animus that might be said to justify it. Put differently, the Chief Justice held that Trump was free to act with anti-Muslim motive in crafting immigration policy—and to admit his bigoted motives on TV and Twitter—so long as government lawyers could subsequently gin up a half-decent national security claim. Applying this anemic standard, Roberts had little difficulty upholding the travel ban.

Although many justices wrote separately in Hawaii, two opinions stand out. The first is by (retired) Justice Anthony M. Kennedy, who wrote a concurrence that will forever dishonor his legacy. Kennedy had devoted his career to an extraordinarily robust conception of the judicial role in protecting fundamental rights. But here, faced with one of the most open and notorious assaults on religious liberty in modern American history, he blinked. And then he shone a spotlight on his own lack of conviction by effectively begging Trump to follow the law: “An anxious world must know that our Government remains committed always to the liberties the Constitution seeks to preserve and protect, so that freedom extends outward, and lasts.” These are noble words. It’s a shame that they were written to excuse judicial inaction, rather than to justify vindication of religious liberty.

In stark contrast, Justice Sonia Sotomayor wrote a principled, passionate dissent. The majority, she observed, fundamentally failed to appreciate “the pain and suffering the Proclamation inflicts upon countless families and individuals, many of whom are United States citizens.” Even worse, she added, the majority’s analysis replicated the basic error of Korematsu v. United States (1944), an ignominious opinion that upheld Japanese-American internment. There, too, the Court had uncritically accepted “the Government’s misguided invitation to sanction a discriminatory policy motivated by animosity toward a disfavored group, all in the name of a superficial claim of national security.” At bottom, the Hawaii majority forgot a vital lesson of history: official policies motivated by religious and racial animus corrupt our society and debase our national principles.

It isn’t clear if religious freedom in America can ever truly recover from Hawaii. That isn’t meant as hyperbole. Hawaii is the kind of case that permanently changes how an entire community views itself in relation to the Constitution. By upholding Trump’s travel ban, the Court revealed that it will leave vulnerable religious groups defenseless against policies arising from animus. Although the sphere of judicial abdication may technically be confined to immigration, that supposed limitation will provide cold comfort to many Muslims, Jews, Sikhs, Hindus, and other minorities. And understandably so. America’s beacon of religious freedom burns less brightly in Hawaii’s shadow.

Hawaii ’s harmful effects loom largest when this ruling is contrasted with the Court’s decision in Masterpiece Cakeshop Ltd. v. Colorado Civil Rights Commission. There, seven justices upheld a Christian baker’s claim that Colorado could not require him to serve a same-sex couple.

As presented to the Court, Masterpiece involved a sweeping assault on civil rights laws. The baker, Jack C. Phillips, argued that Colorado could not enforce its anti-discrimination law without offending the Free Speech Clause and Free Exercise Clause. If accepted, these arguments would have blasted a gaping hole in civil rights statutes. Americans everywhere would have a newfound right to discriminate.

Phillips’s free exercise claim was especially troubling. He insisted that religious market participants enjoy a unique constitutional entitlement to opt-out of dealings with those whom they view as sinners. This position rejects our longstanding national commitment to equal treatment in commerce. It separates the faithful from all others for purposes of civil rights enforcement. And it invites many to see religion as a constitutionally-privileged force opposing tolerance. For millions of citizens, “religious freedom” would no longer remain an accepted principle. Instead, it would become synonymous with a lived experience of unequal treatment, dignitary harm, and material disadvantage. Gays, women, Jews, Republicans, veterans, and many others might have to Google who will serve people like them before buying basic goods. Mutual understanding and compromise would recede, even as acrimony and tribalism sank deeper roots.

Fortunately, the Court avoided Phillip’s radical claim. Writing for a majority, Justice Kennedy instead based his holding on the unusual facts of this case. He emphasized that when Phillips appeared before the Colorado Civil Rights Commission, one of the commissioners described “freedom of religion” as “one of the most despicable pieces of rhetoric that people can use … to use their religion to hurt others.” To support this point, that commissioner had invoked slavery and the Holocaust. Another commissioner remarked, “[I]f a businessman wants to do business in the state and he’s got an issue with the—the law’s impacting his personal belief system, he needs to look at being able to compromise.”

In Kennedy’s view, these statements revealed “elements of a clear and impermissible hostility” that deprived Phillips of “neutral and respectful consideration of his claims.” Kennedy reasoned that these statements disparaged Phillips’s Christian faith in two respects: “By describing it as despicable, and also by characterizing it as merely rhetorical—something insubstantial and even insincere.” Invoking a legal principle that should have doomed the travel ban (but didn’t), Kennedy warned that the government “cannot act in a manner that passes judgment upon or presupposes the illegitimacy of religious beliefs and practices.” On this basis, he reversed the commission’s decision and returned Phillips’s case to the Colorado courts.

As Kennedy would hasten to observe, there are differences between Masterpiece and Hawaii. Most notably, Hawaii raised separation-of-powers and national security questions absent in Masterpiece.

Still, the contrast is remarkable. In Masterpiece, the Court found intolerable animus where two out of seven commissioners made statements that might be seen as disrespectful of Phillips’s faith. It reached that result without a shred of proof that those statements affected the commission’s unanimous determination that Phillips denied service based solely on sexual orientation. And it reversed the commission’s decision on the theory that nobody should be subjected to official process tainted by the specter of hostility to their faith.

Hawaii displayed no such concern. There, a single official issued a single policy, which he repeatedly and explicitly linked to his own anti-Muslim statements. The life-shattering harm inflicted by this policy vastly exceeded the liability confronting Phillips. The broader damage to religious freedom was all but incalculable. And yet, without ever denying that anti-Muslim animus guided Trump’s hand, the Court upheld his travel ban on the ground that this policy may owe some tiny part of its existence to motives other than bigotry.

It is therefore jarring to read Hawaii and Masterpiece together. For all the formal distinctions in play, it’s hard to avoid the sense that basic principles of religious liberty have been applied inconsistently. Some observers have suggested that these cases reflect nothing more than the policy preferences of a majority-conservative Court. Others assert that each case reveals little more than a fraught compromise within its own field of politics and social conflict. In any event, there’s no denying that Hawaii and Masterpiece offer an uneven and potentially unnerving guide to the future of religious freedom. We can but hope that the Court steps more wisely in the years ahead, striking a balance that effectively guards against anti-religious animus without allowing broad claims of religious liberty to undermine core civil rights laws.

Joshua Matz C’08 is a constitutional lawyer based in Washington, DC. From 2014 to 2015, he clerked for Justice Anthony M. Kennedy.