A Tourist in Romance 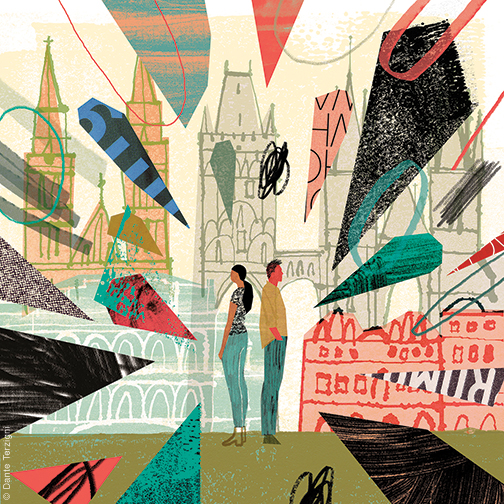 I knew one and a half people in Prague when I arrived at the end of June.

I count Rob halfway because we emailed about house-sitting, but he had already left town when I arrived at his apartment and we never met face-to-face. I met a cat on the first day, but she spat up on my shoes and only wanted canned tuna. The only person I really knew in Prague was the guy I was dating.

My freshman year hadn’t ended with a plan to live alone in the Czech Republic’s capital for a month. But by the time the summer was a month old, I had convinced my parents, my boyfriend, and Rob—the generous owner of my summer lodging—that it was a great idea.

So it came to pass that I found myself standing at the lip of the Charles Bridge, watching the glassy waters of the Vltava River flow through its arches. Tourists leaned against stone statues of venerated saints and sat on the 14th-century stones picking at buckets of fried chicken. I squinted at my Google Maps app, trying to make sense of the Czech street names as my gelato shamefully dribbled onto the street.

This trip didn’t fit into my original summer plan. I finished freshman year with a plane ticket to France and some rose-colored assumptions revised. Yes, I had learned in college, you have to wash your sheets more than once a month. No, calculus doesn’t magically get easier in college. And yes, the language requirement at Penn is actually mandatory. Hence my enrollment in a remedial language immersion program in France.

But one year at Penn hadn’t collapsed all my naiveté. Upperclassmen would roll their eyes when I would say, “I’m still dating someone from high school.” Conventional wisdom says high school relationships don’t carry over well to college. Visits fail to materialize, inside jokes don’t translate over FaceTime, and high school memories fade into the new, beer-soaked twilight. All roads lead to the Turkey Drop—the freshman-year milestone when long-distance couples go home for Thanksgiving and break up.

But I was unflappable. My boyfriend and I had survived two semesters shuttling between our college campuses, bridging the Pennsylvania-length distance with long drives and Spotify playlists.

We’d half-heartedly broken up before summer break, but I persuaded him that our relationship could work if we were in the same city. So when my French course finished, I flew to Prague, where he was completing a college internship program. Did it matter that I couldn’t speak a word of Czech? Or that I didn’t know another soul? Or that I would be responsible for taking care of a cat? Not really. Prague—the Heart of Europe, the City of a Hundred Spires—would redeem months spent rolling through the gray Pennsylvania hinterland.

And it seemed like it might, because every cobblestone seemed to shine with the peachy glow of romance. The history of Prague is drawn on its skyline: beside Communist-era monoliths, there are Romanesque towers, Rococo palaces, and 15th-century cathedrals. We ate spaghetti dinners for eight American dollars, and discussed the Denis Johnson book he loaned me over Pilsners. We woke up at dawn to watch the sun rise over the Vltava. One day I watched a woman walk a leashed black boar down the sidewalk.

Moored by the banks of the Vltava, flat-bottomed boats outfitted with restaurants and bars bobbed in the water. When my boyfriend finished his work at a Czech scientific journal, we would meet aboard. To my 18-year-old mind, which relied on pop culture to explain dating, it was a heady cocktail of romantic tropes: The river! The sunset! The glass in my suddenly-legal-in-Europe hand! A movie soundtrack started playing in my head, unspooling across the long walk home.

But sometimes the soundtrack would shudder to a stop. My boyfriend was allergic to the cat, and his eyelids swelled to the size of grapes. With the 2016 election looming nearer, we still argued about politics. A minor disagreement, like about the merits of Kurt Vonnegut, could swallow an entire meal. Why did he think Vonnegut was so great? Why did I slice onions that way?

One weekend, we planned a day trip to nearby Karlovy Vary, which was staging a weekend film festival. A two-hour-plus bus ride delivered us to rural Czechia, depositing us at a stop about a mile’s walk to the festival. Google Maps routed us through a car tunnel with no sidewalk. After dodging dismemberment, we rerouted and eventually found the festival grounds—too late in the afternoon, when all the screenings had already started. Over a bowl of garlic soup, we decided to visit the other thing Karlovy Vary was known for: natural hot springs.

A sweaty hike found us in the city center, the site of the famous waters. The springs had been piped through the street and channeled into foot-level spigots for tourists. Lukewarm water spurted out at intervals, cooling in basins cemented into the pavement.

Around us, other Americans were buying tiny pitchers to capture the mineral water, which was supposed to have healing properties if you drank it. We didn’t buy a pitcher but tried it anyway. It tasted like salt. On the bus ride back to Prague, we had a circular argument about nothing, beating around our disappointment without addressing it. The setting had changed, but our problems had followed us from Pennsylvania to Prague. Underlying it all was my faultiest assumption: that the afterlife of a grand gesture would be just as grand.

I’d spent nine months bemoaning the hours-long drive separating us, only to discover that it was actually the closeness that rubbed us the wrong way. I was used to short, bite-sized visits, which allowed us to highlight the good and forget the bad. Now, living in the same city and confronting problems without a mediating computer screen, I discovered I wasn’t really equipped for a relationship at all.

What freshman year couldn’t break crumbled from ordinary disappointments—the kind revealed when you set out to make quesadillas but accidentally buy Muenster cheese because the label is written in Czech.

I spent an inordinate amount of time charting the seismology of our relationship, but there were unexpected gifts from living in a new place without any tethering. Even as a drifting college dilettante—lost and unprepared and undereducated.

I was a tourist in Prague and in love. But a city is not a romantic device, a trope that can be procured like a bouquet of flowers to smooth a love story. When I think of Prague now, what I’m most grateful for are the un-grand memories: running in the wooded hills behind the American embassy, the cedary smell of the cat-sitting apartment, eating sweet noodles as I tried to pronounce rounded Czech syllables.

The relationship didn’t survive the summer. But I hope I’ll return to the Czech Republic. And maybe this time I’ll come knowing no one but the cat.

Julia Bell is a College senior.