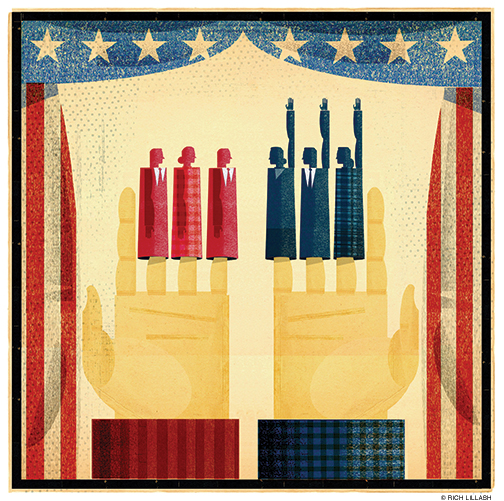 As of May 31, the growing legions of “independent” outside groups hoping to influence the 2016 presidential election had spent more than $300 million, and raised twice as much. But most of that spending is “independent” in name only. The rules governing Super PACs are sufficiently farcical that in 2012, Comedy Central’s Stephen Colbert formed one of his own—complete with a shell corporation designed to facilitate unlimited donations by undisclosed individuals.

Colbert’s lawyer in that award-winning piece of explanatory journalism was Trevor Potter, who not only served as general counsel for the Republican presidential campaigns of George H. W. Bush and John McCain, but was a commissioner and chair of the six-person Federal Elections Commission during the early 1990s. At a recent Law School event titled “The Appearance of Corruption: Following the Money Trail in Federal Elections,” Potter addressed the growing concern about the FEC’s apparent inability to enforce US election law. Drawing on his four-year experience on the commission, he diagnosed the problem as a culture failure—and pointed a finger at his own party’s leadership.

He began by explaining that the FEC may not include more than three members from any political party, and that four votes are required to take any kind of action (including having a meeting). The commission was thus “designed to work on a bipartisan basis,” so that both parties are treated equally and fairly. But something has gone wrong.

Potter’s remarks have been edited lightly for concision.

We would have a case come up, and it involved a Democrat, and the allegation was they had broken the law and had coordinated with an allegedly independent outside expenditure. The Democrats would come to me, and say, “Yeah, looks like our guy screwed up. We’re going to vote with you on this, because we think you’re right—but you had better vote with us when it’s one of your guys.” That was how the partisanship largely functioned.

But they were there to make sure the agency worked. I think we had one 3-3 tie the entire time I was there—and that was basically an accident. We worked it out. We didn’t want 3-3 ties. It would have been personally embarrassing, and as commissioners we didn’t believe in embarrassing the agency.

Even then, Democrats were more regulatory, and Republican commissioners were more deregulatory in terms of what they though the law ought to be. But I can recall my Republican colleagues saying in meetings, “I’m going to vote with the recommendation of the general counsel that we find a violation”—which meant we would have gone to court and argued that somebody had broken the law. And the Republican commissioner would say, “I think the law is wrong—but that’s not for me say, that’s for a court to say.”

What’s happened now is you have three Democratic commissioners who by and large are in favor of enforcing the law, and three Republicans who are generally against enforcing the law. I suspect if they had their choice, there would be no FEC … In case after case, the three Republicans will say, “We do not think, even if true, this is a violation of law, and therefore we don’t want to open an investigation—so we’re not going to learn anything about the facts. We’re just going to take what’s in front of us, and we’ll deadlock over whether it’s a violation, and we will therefore close the case with no action.” So the commission has essentially disappeared from the playing field in terms of an enforcement role. The problem with that is the whole system is built around the idea that the commission occupies the field, and that courts defer to the commission, and that the Justice Department defers to the commission …

[Recently the Justice Department alleged that] someone had tried to help a campaign by paying a campaign debt through another vendor, so it would never show up on the reports. It argued that this is a violation of law, which requires you to disclose all campaign expenditures and contributions on your reports. Pretty straightforward. But the defense was, “This isn’t straightforward; the FEC has split 3-3 on similar issues and refused to investigate them. And therefore when the expert agency cannot say what the law is, you can’t prosecute us.” [As a result,] the courts have to defer to an agency that can’t do anything!

Congress gave the FEC a lot of latitude so it could use its expertise, and I don’t think it ever occurred to Congress that it would be unable in almost every way to exercise the power it’s been given. But since it has been given it, nobody else can exercise that power.

I think what you have to do in a free society that creates an administrative agency is agree that the people who govern that agency are going to be committed to the goals the agency was created to achieve … And if we don’t like the law, [Congress] should change it. And if it’s unconstitutional, the courts should hold it unconstitutional. But the commissioners’ job should be to enforce it. And I think the leadership of the Republican Party has decided to [appoint commissioners] who would not enforce a law that the leadership doesn’t like but does not have the votes to change. So it is effectively a backdoor process of repealing a law because the front door doesn’t work.