As reported in this issue’s “Old Penn,” 2022 marks the 100th anniversary of the first time a Penn Commencement took place on campus, being held in Weightman Hall rather than at the Academy of Music or Metropolitan Opera House downtown, the previous usual venues—which is the third most notable Penn Commencement-related fact about this year.

Much more significant for the graduating students ranged on Franklin Field, their families and friends in the stadium stands, and the University leaders and honorands gathered on stage on the morning of May 16, the year 2022 also marked the return of a fully in-person Commencement after a virtual ceremony in 2020 and a limited-attendance event for undergraduates only in 2021.

The Class of 2022 was approaching the three-quarter mark of their sophomore year when the pandemic struck, and they have mostly spent their time since then virtual, masked, and socially distanced. Interim President and former provost Wendell Pritchett Gr’97 praised their “heightened resilience and responsiveness” and ability to see the world “with near superhuman keenness. Where others see a roadblock, you discern a path forward.”

And 2022 will also be remembered as the year of two Commencements, as the University held a second ceremony on Sunday, May 22, to celebrate the Class of 2020 and the 2021 graduate students shut out from their live event last year. Pritchett called them “the oft delayed but never deterred, most amazing, most incredible Class of 2020.” Read more about both events in this issue’s “Gazetteer.”

Alumni Weekend was back on campus in full force as well—extra strength, in fact—as this year’s reunion classes were joined by the five-year classes whose gatherings were put off, swelling the ranks of returning alumni, who were undeterred by rain, especially heavy during the parade down Locust Walk (see our photo essay on page 24). Neither the weather nor lingering concerns about COVID kept people away. According to Alumni Relations figures, 2022 set a record for undergraduate attendance, and the overall number was close.

As in pre-pandemic times, the weekend also featured a variety of expert talks and panels—freshly novel in that they were accessed by foot rather than Zoom—on topics ranging from Hollywood to climate change. It was a talk that he gave in 2019 to first-generation and low-income students at Penn that helped lead human-rights lawyer Efrén Olivares C’05 to write his new memoir, My Boy Will Die of Sorrow: A Memoir of Immigration from the Front Lines.

As frequent contributor Julia M. Klein recounts in “Crossing Borders,” Olivares had come to speak at the Greenfield Intercultural Center, where he was a work-study student and found his social and cultural home on campus, when for the first time he began to see the connections between his own immigration story and the plight of the much more desperate families caught up in the Trump Administration’s “zero tolerance” policy at the US-Mexico border in 2018. The book weaves together Olivares’ own journey coming to the US as a teenager with limited English skills to Penn, Yale law school, and a legal career with his efforts to fight the policy and to represent and reunite families separated at the border.

Also in this issue, senior editor Trey Popp profiles David Skeel, a professor specializing in bankruptcy law and an evangelical Christian, who has in recent years increasingly come to blend those two interests in his scholarship and other writing. “The Law, the Gospel, and David Skeel” traces Skeel’s intellectual and spiritual journey from a college English major so ignorant of the Judeo-Christian tradition that he was unfamiliar with the story of Abraham and Isaac to a leading figure in one of the least English-majory corners of the legal profession and a committed believer in the Bible as the “true and authoritative” guide to life.

According to a June 30, 1922, article in the Gazette, moving Commencement to Weightman Hall meant that the 1,196 students in the Class of 1922 had to graduate in shifts, undergrads in the morning and graduate and professional schools in the afternoon (leading to a plug for construction of Irvine Auditorium, then in the planning stages). Even so, the article concluded that the experiment—by providing “a truly academic atmosphere”—was worth continuing: “Holding the graduating exercises on the campus proved a success from every angle.” 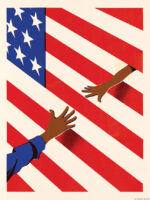