Telenovelas weren’t made to change the world, but Paul Falzone Gr’08 believes that with the right tinkering, maybe they could.

For nearly a decade, he’s been turning entertainment media into tools for social change in Uganda through his nonprofit, Peripheral Vision International. And now, in one of his most imaginative feats yet, that means hacking a Venezuelan telenovela.

“If you turn on a TV in Mozambique or Uganda,” he explains, “mostly what you see are imported telenovelas” from Latin America and Turkey. There’s little mystery why. “Audiences like them and they’re cheap.”

Falzone originally wanted to produce his own “pro-social” telenovela, but when it turned out that would cost millions of dollars, he knew he’d need another approach.

With a budget of just $50,000 in grant money, Falzone and his team bought the rights to Nacer Contigo, whose 120 soapy episodes originally aired in 2012, and paid to re-script, re-dub, and re-cut it into an entirely different show. The new version focuses on messaging around sexual and reproductive health, birth control, and female empowerment. It’s been dubbed into both English and French, and is set to premiere on national television in Uganda by June 1, with more countries expected to follow suit throughout the summer.

Falzone says he never imagined he’d be doing this work, much less spending up to half of his time in sub-Saharan Africa. As a PhD student in communications at Annenberg, he studied how US activists were using improvedvideo technology and faster internet connections to organize and spread their messages, particularly through documentaries.

He taught media studies for a few years after Penn, then landed a consulting job in New York, working for a coalition of organizations that were focused on anti-corruption efforts in Uganda leading up to the 2011 elections there.

When he first got that gig, “I didn’t know where Uganda was on a map,” Falzone admits. “I could have guessed, but I might not have guessed right.” Soon he was making trips to the East African country, scrutinizing its media landscape and drawing on the principles of media ethnography that he’d learned at Penn.

Falzone quickly clocked the untapped potential of Uganda’s ambient screens. Although limited access to electricity discouraged many people from having TVs in their homes, “there were screens all over the place—in bars and beauty salons, long-distance buses, and little bootleg cinemas called bibanda,” he recalls.

He developed a project that bought advertising space on pirated DVDs and used the spots for anti-corruption messaging. “Messages about political corruption and bribery and the oil industry were going out on, let’s say, The Expendables on DVD that you’d buy at the market,” he remembers. “That was my first edgy work in Uganda.”

After founding PVI in 2011, Falzone continued to create mission-driven content that he estimates has been read, watched, and listened to more than a billion times. While “it started off with just me and a concept,” today his organization includes 15 full-time employees and has raised over $5.5 million in grant support.

PVI’s longest-running project, launched in 2012, built on the original DVD ad space idea. The nonprofit produces a straight-to-DVD music video program that sandwiches public-service announcements in between popular songs. Currently the show goes out to 4,000 screens across Uganda every two weeks.

“People like to be entertained,” Falzone says. “If you figure out what they like—in this case, music videos—that becomes an opportunity to build an audience.”

Following that same theory, in 2014, Falzone tackled the news. Since Uganda’s median age is just 15, “the more you can talk to folks early on, when they’re still trying to make sense of the world and their country, the more effective it can be,” he says. He figured that a young population might pay more attention to the news if it was presented as a rap. (Even more to his credit, he hatched this idea before Hamilton hadshot onto Broadway with its fusion of hip-hop and political history.)

“At first we thought maybe we could teach reporters to rap,” Falzone remembers. “That was a mistake. But what we did find was that you could take musicians and make them citizen journalists.”

He asked local journalists to curate a selection of news stories that a group of “rap-porters” sifted through and built raps around. Though it went on hiatus in 2018, at its height Newz Beat was airing four times a week on broadcast TVand landing 3.2 million views. Radio stations began playing the audio. People sold each other the files. Uganda’s national telecom even hired PVI’s rappers to write and perform ads in what Falzone calls “a clear knock-off” of the Newz Beat format. (“Rather than suing them, we figured that imitation was the sincerest form of flattery,” he says.)

But in the last few years, faced with an increasingly restrictive mediascape in Uganda, Falzone has pivoted PVI away from endeavors like news rap-porting that are constrained to a specific region. Now he’s more interested in projects that can be scaled to reach communities all over the world.

In 2017, PVI won funding from the MIT Solve Global Challenge for a project aimed at people who own basic cell phones. Using those phones, people can dial in to play spoken-word choose-your-own-adventure-style games that are built around topics like climate change’s impact on farming, sexual and reproductive health, contraception, and other social issues. Today those Wanji Games are available in more than a dozen countries.

Last summer, PVI launched Passionfruit Island—a digital graphic novel translated into French, English, and Spanish. “It’s gender-positive, sex-positive, and a little bit spicy,” Falzone says. He notes that the first issue has been read more than 228,000 times in over 40 countries. A second installment is in the works.

And now there’s the hacked telenovela, which Falzone hopes to spread through sub-Saharan Africa and beyond. “So many TV stations are hungry for content, but they can’t afford it,” he says. “We want to give audiences something they want, broadcasters something they want to show, and make it something that’s going to shape lives in a positive direction—that we can also afford to make.”

In Uganda, where Falzone has the most experience, “people are looking to media for the message, not just for the entertainment,” he says. “They are hungry for information that will teach them and empower them to have better lives. The problem is that entertainment is rarely engineered to help people make sense of the world.” As a result, the people his projects aim to reach are “underserved by their governments, underserved by their schools, and desperately underserved by the existing media.”

“The telenovela is a test balloon,” he adds. “If you can get a $50,000 show on 10, 12, 15 nations’ TV stations, what else can you do? I think what’s going to emerge [in sub-Saharan Africa] in the next decade or two is a shared popular culture, and it’s going to be televisual. We’re increasingly thinking about that, and wondering how we can use broadcast television really tactically.”

Though Falzone initially fell into working abroad, he’s now hooked on expanding the mediascape in places where media options are sparse. His frequent stays in Uganda have also opened his eyes to how cushy life in the US can be. “I’m constantly aware of how much I have, and therefore how much I owe,” he says. 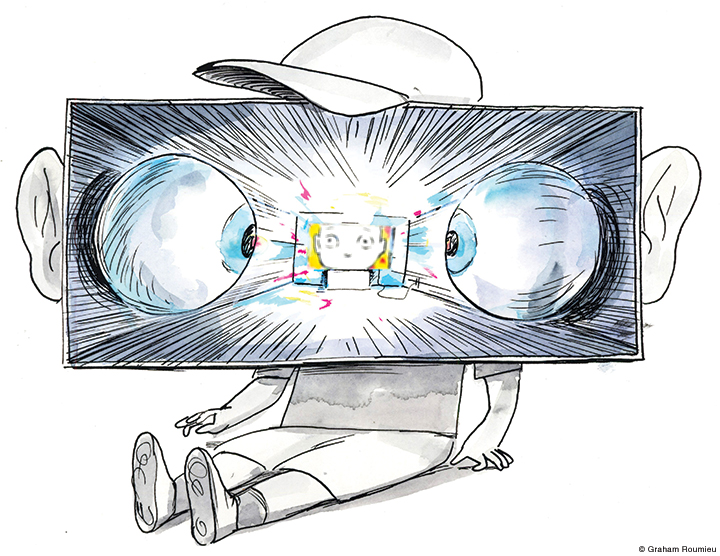 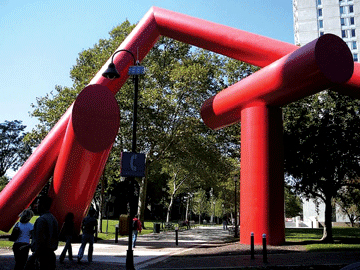 Alumni
Celebrating Penn on the Web 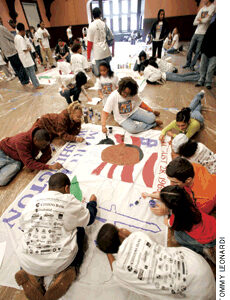 Gazetteer
Holding the Media and its Audience Accountable