A Palestra Icon Hangs Up His Mop

Just before leaving the Palestra one afternoon in early May, a 19-year-old basketball player from southern California turns toward a 68-year-old custodian from Southwest Philadelphia. At first glance, it might seem like the two are from different worlds. But together they share a laugh and a warm embrace.

“That’s Camryn Crocker,” says the custodian, walking back toward the Palestra floor, cutting underneath the bleachers and settling into a comfortable couch in the Class of ’71 room. “He just told me I was the first person he met when he got to Penn.

“They all seem to remember the first time they met me,” he continues wistfully. “That’s a good thing. A lot of people can’t say that.”

It’s hard not to remember Dan Harrell CGS’00, the indefatigable Palestra custodian who has become something of a campus icon—a legendary figure who cleans a legendary gym. Hired by Penn in 1989, he first gained fame more than a decade ago when, after 10 years of taking night classes at the university that employed him, he graduated from Penn, walking in the Commencement ceremony with a mop painted red and blue. (He did this, he says now, not so much as a publicity stunt but to show all of the other “housekeepers, mechanics, and electricians that it was one of usgoing down there.”) Not long after that, Harrell began mopping the Palestra floor during halftime of games in blue shorts, high white socks, and gold shoes, which became his signature look for many years (a look you can still find on the custom-made Dan Harrell bobblehead dolls, which really do exist). All the while, he offered his friendship and advice to the athletes and coaches with whom he shared the Palestra, breaking down the barrier between students and campus workers and developing unlikely, often-lifelong bonds.

“You like walking up to them and saying ‘Welcome to the Palestra’ and making them feel at home,” Harrell said. “Nine out of ten times, they’re away from home for the first time. I feel like it’s important for me to do that.”

It’s how Harrell feels about Penn athletes, the basketball players in particular, that has made his job a rewarding one. It’s also what has delayed his inevitable retirement—until now.

After 23 years of mopping the Palestra floors and sneaking into players’ hearts, Harrell retired in mid-June; the physical demands of waking up at 4 a.m. and staying on his feet all day simply became too much for a man approaching 70. Harrell had been “crying wolf,” as he called it, for a few years but decided to go out with the current crop of seniors, a group that includes men’s basketball stalwarts Zack Rosen W’12, Tyler Bernardini W’12, Rob Belcore W’12, and Michael Howlett C’12.

“I made a commitment,” Harrell said. “I stuck around because of the feelings I have for those guys—and the women’s basketball players and volleyball players. I’m one of the few guys that doesn’t want to retire.”

Rosen called it special that Harrell wanted to leave Penn with his graduating class, especially after how close the two of them grew over the past four years. It’s a friendship Rosen never expected, not after his first encounter with Harrell when he thought the man with the mop was a little bit nuts. “I didn’t know who he was and I could only understand half of the words coming out of his mouth,” Rosen laughed.

Others have had similar initial reactions to the fast-talking Harrell, who admits he can be abrasive and, at times, have a bit of a foul mouth. Sometimes, he’ll chide you about where you’re from or your favorite sports teams. And he’ll definitely get on you if you mess with his Palestra. It doesn’t matter who you are, either. When the great Julius “Dr. J” Erving stepped on the gym floor while wearing loafers, Harrell came right over to him and said, “Excuse me, Doctor, all due respect, but you can’t shoot on the floor with those shoes.” Another time, former Penn wrestling standout Yoshi Nakamura W’02 ran sprints on the floor after it had been cleaned, which led to an epic, expletive-laden shouting match between Harrell and Nakamura. The two later became close.

“He always tells it like it is, that’s for sure,” said his wife of 46 years, Regina. “That’s him. That’s his personality. He’s got a dry sense of humor and the kids seem to love that about him. He’ll tell them when he thinks they’re absolutely right about stuff. If he doesn’t think you’re doing something right, he’ll tell them that too. They all seem to want his advice. They all seem to really, really care about him.”

A former Catholic Youth Organization, high school, and Penn sprint football coach, Harrell understands athletes’ psyches better than most. Oftentimes before games, the custodian—affectionately called “Daddy” by those who know him best—put little Irish good-luck charms in players’ lockers, or taped slogans to the wall like “The most dangerous animal is an underdog.” Rosen still recalls preparing for his first game against rival Princeton when Harrell walked into the locker room, held up a stuffed tiger hanging by a noose and didn’t say anything else except, “If you need a pep talk for Princeton, then you don’t belong here.”

As much as Harrell has motivated Penn athletes over the past two decades, he’s probably motivated himself even more. It was his fierce ambition that led him to enroll as an undergraduate at Penn to pursue the college degree that eluded him as a youngster when he dropped out of Saint Joseph’s after just one class. It was hard, at times, for him to keep up with kids more than 30 years his junior. “In my first course they mentioned an email address, and I didn’t know what they were talking about,” he said. But relying on a sharp wit and writing skills his wife calls “unbelievable,” he earned a bachelor of arts degree as an American Civilization major, prompting then-Penn president Judy Rodin to hail him as an “authentic Penn hero” at the 2000 Commencement.

So what will the man often called “Palestra Dan” do without the Palestra? Well, he probably won’t sweep the floor of his house as much as he did in his old gym. (“I guess you can say I’m the house cleaner and he’s the Palestra cleaner,” Regina laughs.) And he certainly won’t just lounge on the couch all day. (“My family’s great, but they don’t want me around,” Harrell says.) So to avoid driving his wife crazy, he’ll look for some part-time jobs, continue to be a part of the Mummers and other activities that keep him busy and, yes, sneak into the Palestra when he can, just like he did when he was a kid. Who knows? Maybe he’ll even give pep talks to players—or reprimand anyone who dares to scuff up the gym floor.

He just won’t have his mop with him. 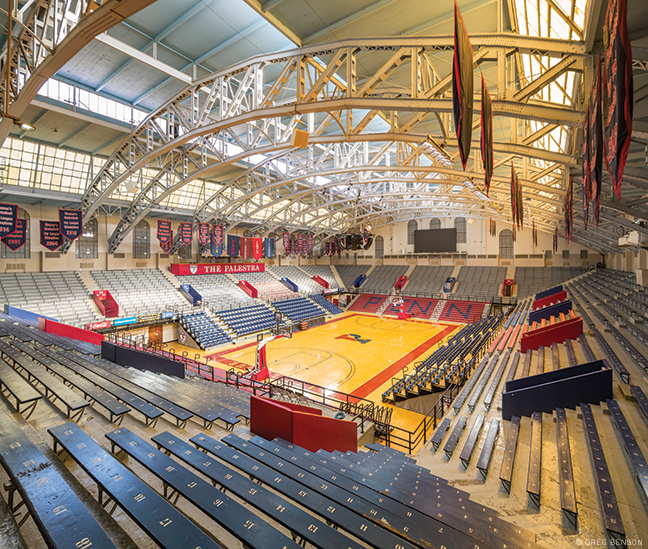 Campus
End of an Athletic Era