Mobs were ransacking cinemas and offices in Pakistan, tear gas wafted over the US consulate in Karachi, and street clashes had killed more than a dozen people when Alec Ross was dispatched from Washington to Islamabad with a simple directive: “Explain YouTube to the mullahs.”

It was September of 2012, and Ross, the senior advisor for innovation to Secretary of State Hillary Clinton, had drawn a uniquely 21st-century diplomatic assignment. He was charged with accounting for the existence of a 14-minute video made by a convicted producer of methamphetamine living in the Los Angeles suburbs. Innocence of Muslims , created by an Egyptian expatriate variously known as Sam Bacile and Nakoula Basseley Nakoula, had suddenly exploded on YouTube, stoking fury with its portrayal of the Prophet Mohammed as a “child molester and a greedy, bloodthirsty thug,” as The New York Times partially summarized its plot.

Ross recalled what came next on a visit to campus for the second annual Dick Wolf C’69 Cinema Studies Conference, titled “Film Diplomacy in the Digital Age.” As protesters breached the walls at the US Embassy in Cairo, and unrest spiraled toward an estimated 50 deaths in eight countries—most of them in Pakistan, whose prime minster declared a “national holiday in protest of the film”—the State Department found itself embroiled in a crash course on the hard-power dimensions of new media. (Excerpted remarks have been edited and condensed for clarity.)

We thought that it could very well be that our embassies would be stormed in each Muslim-majority country in the Middle East. We thought that was a distinct possibility. If they could do that in Cairo, they could do it in any of a variety of other places. And if 125,000 people were going to hit the street in Karachi, and 100,000 people were going to hit the street in Islamabad, this could keep moving. And as we ourselves figured out what the nature of this movie was, we came to realize that this was just made by some lunatic jackass, and it’s on YouTube—this is no different than a lot of the offensive, stupid content that’s put on YouTube.

So I was put on a plane and told to go to Islamabad. They were like, ‘Alec, you have to explain YouTube to the mullahs.’ I get there, and basically go from the airport to a hidden location, because the mullahs don’t want anyone to know who they’re meeting with—you know, one of Hillary’s guys. And it was a fascinating discussion I had with the clergy. First of all, there was no good will. These were not trusted American intermediaries—no, we wanted to find the most influential people who hated the United States the most, and who could therefore get people off the street the most easily.

And the interesting thing about the discussion with them had to do with filmmaking. They assumed that this film had to have been made by a Hollywood studio. They were like, ‘No, no! Look at it! It’s a movie!’ They believed that it had to be made by a Hollywood studio. And because the studio elites have well-known ties to Washington, then Washington must favor this. You know, these are Jews in Hollywood working in cahoots with the American government. That is why these people were on the streets in Islamabad going specifically for the diplomatic compound.

And what followed, with a bunch of men with beards down to the knees and anger in their eyes, was really a technology lesson, and a math lesson. It was a technology lesson in how easy it had become to develop video. And then it was a math lesson, describing the mathematics of YouTube. Here are some numbers for you. Every minute, 100 hours of video is uploaded to YouTube. Every month, 6 billion hours of video is watched on YouTube. So that is almost an hour for every human being on the planet. It has now been localized for 61 countries, and 80 percent of the viewership is outside the United States.

So I’m just going through the math, and I’m describing user-generated video, and the concept of how an entire movie could be posted on YouTube … you can take an entire movie and put it here, and nobody from Hollywood is saying OK, nobody from Google is saying OK. And you could see in their eyes what started off as menace and hostility turn to understanding. These were all very, very intelligent men. They were in positions of authority in part because they were so intelligent. So it was fascinating for me to see the impact of this film, in an entirely malignant way, in a geopolitical context. Again: 50 people dead, hundreds of thousands of people on the street, and we thought potentially hundreds of thousands, if not millions more, soon. And then, very quietly, very quietly—and I’m not taking the credit for this, because I’m sure they left and then went and did their own homework—but very quietly, the streets emptied in Pakistan.

So it showed me the power of film in a hard-power context. A lot of people think of film as this very soft thing—it’s a form of cultural diplomacy where we can come to understand one another better. And that’s true. But we also know how it has been a tool of very powerful, malignant propaganda in the past to justify acts of violence, to justify religious and ethnic hatred. And while we might think those days are behind us, some of what I began to see with the Innocence of Muslims, and all these other things, is that it can be a tool of hard power. And what I believe is that now that certain states are seeing that it actually works when you invest in these media forms, that it almost legitimizes a new 21st-century approach to propagandizing.

This isn’t all soft power. Today, this is increasingly hard power. So what I’m hopeful for is these kinds of capabilities are increasingly harnessed for positive, productive purposes.

Ross allowed that his four-year stint at the State Department typically involved tackling “negative situations” in the digital realm. But another conference participant highlighted digital diplomacy’s role in helping to thaw one of the chilliest geopolitical relationships of the post-Cold War era, between the United States and the Islamic Republic of Iran. Reza Marashi is the research director for the National Iranian American Council and a former Iran desk officer at the State Department. He argued that strategic use of YouTube by then-new Iranian president Hassan Rouhani was a critical precursor to the breakthrough 2013 pact in which Iran agreed to freeze some parts of its nuclear program in exchange for decreased economic sanctions. This was the first formal agreement between the United States and Iran in 34 years. In Marashi’s view, much of the credit lies with the new Iranian administration’s risky decision to let young Iranians—often Western-educated and substantially at odds with their government’s still-powerful hardline faction—run point in the new-media realm.

The way in which the message is spread matters. Facebook and Twitter have gotten the most attention—and understandably so: everything from wishing Jews around the world a happy Rosh Hashanah to calling the Holocaust a genocide and a heinous crime—these kinds of things are obviously very different from saying that Israel should be removed from the pages of time. So that rhetorical shift is noted, and it makes headlines around the world, in every major Western news outlet. And that’s intentional. But it was also just the tip of the iceberg when it came to changing perceptions and articulating a new vision to the world.

One example is the video that the Iranian foreign minister put up on YouTube a couple of days before negotiations started in Geneva over Iran’s nuclear program. It was produced in five different languages, it went viral on social media, it was covered in pretty much every major Western news outlet, and what was telling were the buzzwords that were used: dignity, respect, equal footing. The money quote: “We either win together, or we lose together.” And the message to the world—and this is another direct quote—was: “Join us in ending an unnecessary crisis in opening new horizons.” Now whether or not you believe that is irrelevant. Because [what matters is] that’s very different from what Iran was saying from 2005 to 2013. And it gets people’s attention. It shifts perceptions. And that’s absolutely critical in order to have the space to address the very real political differences that two countries might have.

Example number two was a YouTube video the Iranian president put out, which essentially used Obama’s “Yes We Can” video as a model. Again, it went viral on social media, was covered in major Western newspapers, utilized men and women, and seven different languages were used in the video, [which was] subtitled in English. The interesting thing about it was these initiatives were taken by artists, without the president’s knowledge, and they utilized different sections of speeches that the president used shortly after he was elected—he was doing things like expressing hope for peace and friendship and progress. Only at later stages, when the video was pretty much done, was it shown to President Rouhani. They went to him and said, ‘We made a video, we want to spread it.’ They showed it to him and he said, ‘Great, do it.’ So even though it’s been an intentional shift on the part of the Iranian government, they’ve had volunteers—young people, 35 and younger, oftentimes educated in the West—serving as the catalyst for this.

So you’re seeing a level of engagement within a certain level of Iranian society taking matters into their own hands, as best they can when you live under a government that perhaps does not enact policies that are always in line with the will of the people. And I think that’s important. It shows a little bit of room for maneuvering.

This kind of digital diplomacy has become an integral part of a new effort to [use] widely available technologies to reach out to citizens, companies, and other non-state actors. This style of engagement is sort of a cross between social-networking culture and traditional foreign policy methodology. And it’s not that different than what the United States started to do once Obama came into office. And I do think it represents a shift in form and strategy: a way to amplify traditional diplomatic efforts, develop tech-based policy solutions and encourage cyber-activism.

Using Facebook, Twitter, YouTube and other popular platforms—a lot of this is about 21st-century dynamics. And those dynamics are less about ideological lines and more about whether public spaces are open or closed, and how they’re being utilized in both instances. The capability and capacity inside of Iran is still in its youthful stages—when we’re talking about the Iranian government, not the Iranian people: the Iranian people have proven themselves to be very tech-savvy. But transitioning that, and having it utilized by the government, is another can of worms altogether. Because the predecessor to the Rouhani government was using all this stuff, but for a much different purpose.

So Rouhani’s team doesn’t think that you can sprinkle the Internet on something and everybody grows to be happy, healthy, wealthy, and wise. And they also acknowledge openly the existence of hardliners in Iran who prefer to utilize the tools for negative purposes. But I think Rouhani’s team has demonstrated its grasp of what the hardliners in Iran haven’t fully wrapped their heads around, and that’s that technology isn’t going anywhere. You can fear that you can’t fully control the Internet, and thus ignore digital diplomacy, or you can recognize that you can’t control it, but instead seek to influence it. There is at least a segment of Iranian officials who understand, in order to get stuff done, we have to sell it a certain way. And once the toothpaste is out of the tube, it’s hard to put back in. —T.P. 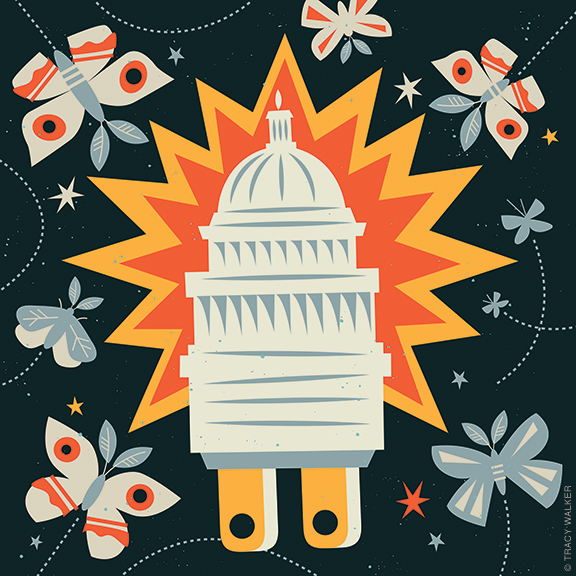 Gazetteer
No Politics Is Local