On the first Sunday in March, at 3 p.m. on the dot, Wharton MBA candidate Patrick Burns arrived at the Dolby Theatre in Hollywood to attend the 86th Academy Awards. As a producer of Cutie and the Boxer, a film nominated in the Best Documentary Feature category, he could have taken a black car but chose instead to have his mother drop him off, so she could see the action.

Wearing a custom-made black suit, he walked slowly down the red carpet. “It’s like a foot thick,” recalls Carine Carmy C’08, Burns’ girlfriend, who was also on the scene. “It is a legitimate carpet.” Burns took everything in—the grandstands packed with cheering fans, the stars (Hello, Jessica Biel!), the cameras—and then sat down for the ceremony.

Most of the industry professionals around him were nervous wrecks—many had worked their entire lives for this moment—but not Burns. He never even watched the Oscars, let alone dreamed of being a nominee. And he certainly had no interest in being a professional filmmaker. For him, Cutie and the Boxer had simply been a hobby, something he did on the weekends for fun, while he figured out what he wanted to do with his life.

Burns is the first to admit that he has jumped around a lot.

At his Jesuit high school in Dallas, he was the jock, a football player who was recruited by Princeton, Harvard, and Yale. Deciding against four more years of all-consuming athletics, Burns turned them all down to enroll at the University of Texas in Austin, where he dabbled in literature, biology, and Spanish while playing bass in an indie rock band.

Lacking a clear idea about what to do upon graduation, he moved to Japan for nine months, where he taught English, and then traveled through India. After that he moved to New York, and worked as a journalist, product manager for a tech startup, and a venture capitalist, in that order. He also launched his own startup, a company that digitally connects Americans who want to learn foreign languages with native speakers abroad.

While he may not have had a clear professional calling, Burns did have a passion that he pursued steadily over the years: Japanese art. His trip abroad gave him the chance to visit art galleries, read books on famous Japanese photographers like Hiroshi Sugimoto, and experiment with making short films and photo documentaries.

Back in New York, Burns noticed that a Japanese avant-garde artist couple he had read about, Noriko and Ushio Shinohara—nicknamed Cutie and Boxer—were holding an exhibition at their home and studio in Brooklyn. He attended and was immediately struck by the pair. “She has beautiful, silver hair, and he has this majestic look about him,” he says, adding that he was fascinated by the ways both of them struggled financially and emotionally with being artists.

“I kind of wanted to become best friends with them,” Burns recalls. “So I asked if I could take portraits of them.”

The photographs turned out so well that Burns’ roommate, Zachary Heinzerling, who studied film and worked at HBO, suggested asking the Shinoharas to be the subject of a short video. Burns and Heinzerling spent a few Saturdays with the artists, compiled a five-minute film, and put it on YouTube. A friend suggested they do a longer film, so they went back.

By the time the film was completed, in the fall of 2012, it had metamorphosed from a basic documentary about interesting artists (Ushio applies paint to boxing gloves and then punches a canvas; Noriko draws cartoon-like narratives) into a love story about two people who deal with one another’s ups and downs. The story’s universal appeal earned it a spot at the Sundance Film Festival. (Burns had been so sure it wouldn’t get in that he told Ushio he would give himself a mohawk haircut if it did—a promise he soon broke).

From there the film was picked up by the Weinstein Company, streamed on iTunes and Netflix, and screened at 12 American cities.

The film ended up losing to Twenty Feet From Stardom (which, in a small-world twist, also featured a Penn connection in director Morgan Neville C’89, see page 58).

While Burns jokes about making a sequel—“There is so much footage—good footage—that wasn’t used,” he laughs—he has moved on to his next project: Wharton. The MBA student is working on finding a way to keep one foot in technology and another in film. This summer he’s interning at Amazon Instant Video. 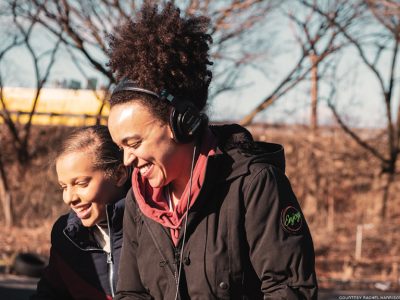