“The rules are simple: no social media, no e-mails, no texts, no phone, no music, no books, no watch, no light.”

The mercury dipped below 60 in Malibu. I closed my windows and turned up the thermostat. I was feeling irritated and envious. Another member of my Wharton ’87 social circle had just sold a company. It happens every so often. This time it was Zynga, for $12.6 billion.

At least I’d narrated a whole chapter of Harry Potter to our nine-year-old son this evening, and had managed to take out the trash as well. I’d spent the previous night taking in the season finale of Yellowstone. The chosen son had returned from a vision quest, having merged with his spirit animal—the wolf.

A vision quest, I thought: that’s what I need.

A fragmented young warrior goes forth into the wilderness, solo, in search of a vision or spirit animal. He returns whole, with both a protector and a new purpose in life. Enough North American tribes had embraced this practice that surely it had to have some value. Even for someone my age. If I couldn’t get onto the Forbes 400, or run 100 miles, maybe I could do more—be more—by doing less. In this challenge I would do the most, be the best, by doing the hardest thing of all: nothing.

In Joe Versus the Volcano, a Blockbuster Video–era rom-com that I’m old enough to remember, Meg Ryan travels everywhere with a set of giant Louis Vuitton steamer trunks. No matter where she goes, her emotional baggage tags along. Similarly burdened, I walk off into the Santa Monica Mountains hauling an overstuffed army cargo bag of the sort one might strap to a burro’s haunches. All that heft, for a one-day adventure.

But the awkward burden gets me thinking.

Wharton, when I attended in the roaring ’80s, was the educational epicenter of greed. Michael Milken WG’70 was revered as the king of the junk bond. A few months before Ivan Boesky was imprisoned for an insider-trading conspiracy, a group of Wharton MBA students hosted him on campus as a hero. (“I think greed is healthy,” he told the graduating MBA class at UC Berkeley that year, inspiring Oliver Stone to create the iconic Gordon Gekko.) Donald Trump W’68 had his fair share of fanboys. Steinberg-Dietrich Hall functioned as a Willy Wonka factory of capitalism, only instead of confections, it churned out entrepreneurs and aspiring lords of finance. Dining with my friends at their ZBT fraternity house, I would cast my eye toward a dining room chalkboard bearing the latest stock index figures.

Many of these classmates headed east to Salomon Brothers to find their fortunes, embracing a dark-to-dark workday. I headed the opposite direction: west, where I hoped to become big, rich, tan, and happy.

Thirty-five years later, I have achieved much of what I set out to accomplish. (I am, after all, living in Malibu.) Yet every so often a cold breeze of jealousy, or uncertainty, plagues my peace of mind. Did I make the right choice? Am I doing enough with my life? Have I worked hard enough to make a difference? Perhaps I’ll be that one person in a thousand who lays on their deathbed wondering, “Should I have spent more time at the office?”

In college our standard for success was simple: bench-press twice your bodyweight, drink a case of beer in a night, get a 4.0 GPA. But now the Alpha standard is even higher: run the Marathon des Sables across the Sahara Desert, marry an Athleta model, own a Gulfstream 6. And if you’re not making the grade, social media is there to rub your face in it. Its algorithms taint our satisfaction with the vividness of our own lives.

As the Santa Ana winds gust hot and dry, I drop down the Serrano Canyon road into a parched, craggy realm patrolled by mountain lions and rattlesnakes. I turn off the main trail and cross two dry streambeds, heading for a small manzanita tree that casts a spot of shade. I set up my tent, and place several large branches in a circle 10 feet from the entrance. The rules are simple: no social media, no e-mails, no texts, no phone, no music, no books, no watch, no light. Drink a lot of water; eat a little food. No leaving the circle, except to void bladder or bowels.

So here I am. My tent is hot and filled with flies. Nervous energy courses through my veins. What’s happening between Russia and Ukraine? Am I missing a big drop in the Nasdaq? What if my dad needs to get hold of me? Or my wife, or our sons? To burn off some cortisol, I crank out some squats, pushups, and water jug curls. The air gradually cools. A few crickets strike up a tune. The mountain’s rock face turns red, then purple, then black. Thoughts of mountain lions and rattlesnakes dissipate, and I fall asleep in a Teflon bivy sack.

The next morning dawns hot and clear. After a four-banana breakfast, I turn to the task at hand: making sense of my life to date, finding a new purpose, or at least rejuvenating it. I close my eyes and watch the movie of my life. Are the memories original, or borrowed from photos? Who knows? I review each one, and scrutinize every friendship and kin connection.

The oldest ones feel the deepest. Why? Is it just too hard to amass enough shared experiences with the friends we make later in life? Or has the nature of our experiences somehow diminished, for everybody, in the digital age? That’s what I wonder as I recollect my grandparents—finding my way into a headspace where their ancient accents intermingle with smells of unknown origins. These men and women shared something: they were from a time before the world became homogenized and pasteurized.

I try to tap into every major tragedy, every passing: from my grandfather’s, 50 years ago, to my mom’s, just two months past. She suffered from Parkinson’s disease for 16 years, a process of turning to stone, even worse than death itself. As her environment shrank within the vise grip of her disease, our world compressed from COVID-19. At her funeral, I interrogated the rabbi: Why would a just God create a disease as horrible as Parkinson’s? His belief: the greater the suffering, the greater the meaning.

Was I really suffering out here in the mountains, confined to my own thoughts and fears? Have I really suffered at any point, in my 57 years, as an affluent white American living in the land of wine and honey?

Time to go deeper. I visualize my own funeral, my coffin being lowered into the grave. Are there hundreds of mourners extolling my virtues as a good person, as a loyal friend? I don’t see a soul. I can only see the coffin being lowered by creaking chains, into the grave. And that’s when it comes to me, my Vision: another door. Halfway down the tunnel of dirt, an opening—an actual exit. What’s behind it? I glimpse only a crack of light. What does this mean? I stab in the dark, touching only abstractions. There is a third door, I think, one between the world of light and the realm of darkness.

But what is there to do with this epiphany, if an epiphany is what it is?

I contemplate the boundaries of my self-constructed circle. I need to live more deeply. I promise to think less about the few who have “more” than I, and more about how I can help the many who have less. It’s time to start studying the Torah; I resolve to do so with the rabbi who extolled suffering as a means to transcendence. If I am going to end up in this dirt shaft to the underworld sooner or later, I better get some spiritual guidance on how to locate that emergency exit.

I pack up my duffel bag to return to the world of news and noise. Retracing my route home, I think about my 30 hours alone in a 10-foot circle. I have not free-soloed El Capitan. Still less have I minted an eight-figure fortune, or done anything to boast about in the Class of 1987 alumni notes. But I’ve spent time with all aspects of myself, and did not crumble. In fact I feel remarkably calm and light. The burden of my pack, however, is the same as it was before.

I stagger up the trail, then the mountain road, emerging above my home at the magic hour, when sun hits sea, and everything turns to gold. As a Zen Buddhist observed, in time out of mind, “Before enlightenment, chop wood, carry water. After enlightenment, chop wood, carry water.” I drop my bag with a thud and look up at the kitchen clock. Perfect timing! I turn on Rachel Maddow. 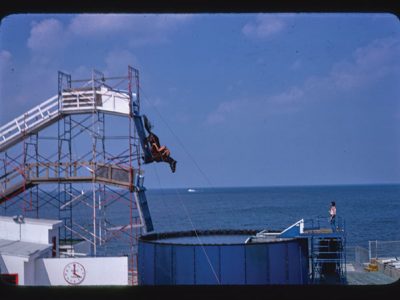