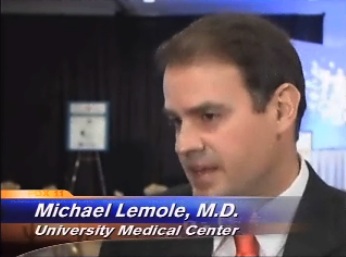 In the March|April 2011 issue of the Gazette you’ll find a profile of Michael Lemole M’95, the neurosurgeon who first operated on Rep. Gabrielle Giffords after a bullet passed through her brain on the day that she and 11 others were shot in Tucson, AZ.  When he stepped up to the microphone at the press briefing after surgery and delivered an update on her condition, Lemole became a sort of unofficial spokesperson for the tragedy.  In the days that followed, his face was a familiar sight on TV as he delivered his sober, soft-spoken updates about Giffords’ slowly improving prognosis.

It feels like many news cycles ago, now that we’re surrounded by coverage of Japan and Libya.  But Lemole recently made the news again in Arizona in much happier circumstances, when he accepted an award for his “outstanding service to the community.”  (The full story from FOX11 in Arizona can be found here.)

In the Gazette, Lemole tries to describe his feelings before surgery:

“There’s always a little bit [of adrenaline] before any major procedure. But once you’re in the moment, you don’t experience that anymore…you’re reacting and acting, pro-acting, whatever the case may be; and usually somewhere in the procedure—when you sort of realize that the end, and particularly a good end, is a foregone conclusion—you start to get that elation.”