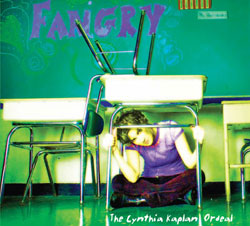 We recently featured Cynthia Kaplan in the magazine, where she sat down to answer a few questions about the release of her comedy CD “Fangry.”  Or as she puts it on her website: “The long-awaited new album (there isn’t an old one, actually) from The Cynthia Kaplan Ordeal has arrived!”

(A word of warning: the censored title of the video above would be something like “Merry F**cking Christmas to You”)

Kaplan was in Philly just before Christmas, delivering her yuletide carols to an enthusiastic crowd at the Tin Angel, where this video was taken.

Our editor John Prendergast caught up with her via email, and she had this to say about the tune:  “I’m mostly making fun of myself and my fellow Jews, which I am allowed to do, according to the Torah. As far as Christmas goes, what we should all be ticked off about is the fact that our society has become so PC that our kids don’t learn Christmas carols in school anymore. “Hark the Herald Angels Sing” is a great song. A great song. And, frankly, the dreidel song sucks. There, I said it.”