Arts and CultureArts blogNews and Features

“August 4, 2010, was a very exciting day for me,” Erin Cornman GNu’19 began, launching into a true-life tale that brought an audience to tears, won her first prize in a storytelling competition, and eventually played on video in front of her coworkers at Lancaster General Hospital.

At the first-ever Penn Nursing Story Slam, held last February inside a sold-out Rotunda, Cornman laid out her experience as a fledgling emergency department nurse in the US Air Force, newly arrived in Afghanistan:

It’s a story most people would have never heard her tell, but over the past eight months, Penn Nursing has been striving to turn Penn’s nurses and nursing students into their own narrators. It started with the story slam last February, but has continued more recently with an on-campus screening of those slam performances, a forthcoming podcast, and a new social media feature.

Marion Leary GNu’13 Gr’14 Gr’23, the director of innovation for Penn Nursing who created both the story slam and podcast, says these initiatives are “a way to amplify what nurses do on a daily basis.”

“A lot of what people think about nursing is what they see on television—bedside nurses in the hospital,” she says. “That’s absolutely great, but it’s not the only thing nurses do. We’re in so many other places: Congress, research labs, classrooms, the military. All of that comes through in the stories that we tell.”

Leary says the story slam grew out of her own affinity for story-based podcasts. With a grant from the Sachs Program for Arts Innovation, she got to work on a nursing-focused take. Submissions were open to any nurses from Penn’s six hospitals, along with students, faculty and alumni from Penn Nursing. Of the 24 people who applied, 10 were chosen to perform at the slam.

Knowing that most of these participants were new to the stage, Leary called in First Person Arts, a Philly-based nonprofit focused on storytelling. The organization held a workshop for the nurse storytellers and coached them on techniques for crafting and performing personal stories.

The Rotunda filled to standing-room-only last year for the slam, and this February, the event will move to the larger Harold Prince Theater inside the Annenberg Center.

Leary deemed the whole experience so successful that last month, on Sept. 9, she organized an on-campus screening of the 2019 Story Slam that included a panel discussion with some of the performers. “We saw the same reaction there as at the live event,” she says. “People in the audience were crying, laughing, relating. Even though it wasn’t live, the emotion still came through. That’s the power of storytelling.”

Leary’s new podcast, “Amplify Nursing,” will launch later this fall in a further effort to bring nurses’ stories to the wider world. With cohost Angelarosa Didonato GNu’11, she plans to spotlight the many nurses who are carrying out world-shaping work in varied settings and sectors.

“Around 1980, I worked in a 14-bed trauma ICU in Washington DC as a primary nurse leading a team of 7 nurses who provided care to our primary patients 24 hours a day, 7 days a week. One primary patient was a 19-year old man who had survived a serious motor vehicle crash. He had a brain injury and was slowly emerging from a coma and had complex wounds over his entire body. He was in isolation and my team and I spent hours each shift in his isolation room without a break to manage his wounds over several months. ⁣
⁣
One day his parents sought me out to thank me for taking care of their son. They said they were so happy we were their son’s primary group since they had been told we were the best group in the entire ICU. I told them on behalf of the group how honored we were to have the privilege to care for their son and to work with them. At the end of the conversation I asked who had told them we were the best primary group. I thought it was likely one of the intensivists, the surgeon, or therapists. The parents told me the housekeeper had told them. ⁣
⁣
I was initially surprised, but as I reflected on this, I was even more pleased. Our housekeeper did not know how knowledgeable or experienced we were. But she had a birds-eye view of our care—someone who we never thought of watching us. Indeed, she was a silent witness to how we carried on non-stop, one-way conversations with their son, how we played music we knew he liked, and how carefully and gently we handled him during the many hours we were alone with him providing complex wound care in isolation. ⁣
⁣
To this day, I keep this experience central to all I do. To me the touchstone of excellence is how we manage our most vulnerable patients when we think no one is watching.”

“The goal is to embed new narratives about what it means to be a nurse,” says Sasha Dages, Penn Nursing’s associate director of marketing. Dages is running HoPN, and says she’s already collected more than 50 stories for the new initiative. “Nurses are generally the listeners,” she adds, “but it can be more powerful for them to be sharing their stories.”

That’s true not only for those hearing their tales, but also for the nurses telling them. In talking about her story slam performance, Cornman uses the words therapeutic and cathartic more than once.

“We, as a profession, tend to hold things in and not share our feelings,” she says. Getting up on stage and telling her story “helped me heal.”

“Every nurse has a story,” Cornman says. “Actually, every nurse has lots of stories. The general public might have an idea of what we do, but I don’t think they really know the sacrifices and emotions that we put into caring for them and their loved ones.

“Nursing is already a very trusted profession,” she adds, “but if we tell our stories, I think it will help elevate our field even further, and maybe people will understand us a little better.” 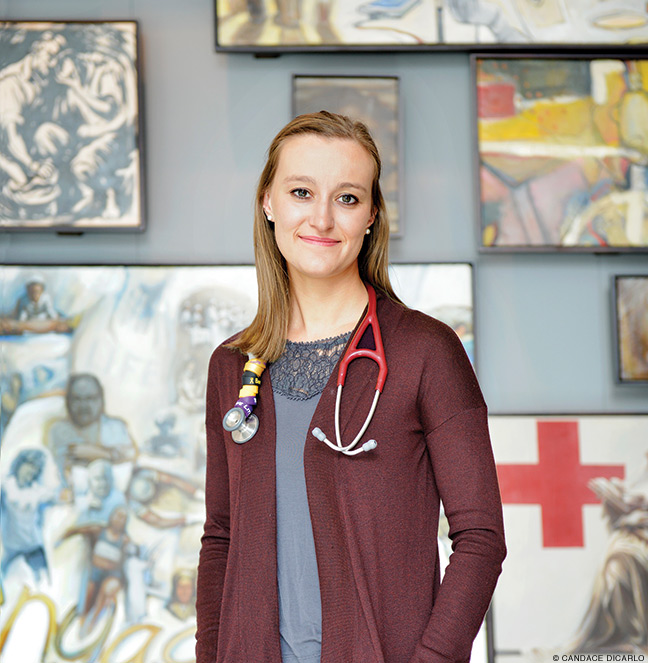