Every year Penn confers degrees on any number of students already well on the way to putting their knowledge into action, but it would be hard to find a better example than Marion Leary GNu’13. Leary, who earned a master’s in nursing and health leadership in May, already had a day job as assistant director of clinical research at Penn’s Center for Resuscitation Science. But what really distinguishes her are the night and weekend hours she’s put in as the president of Sink or Swim (sinkorswimphiladelphia.org), a “medical crowd-funding micro-philanthropy” she founded in October 2011.

Sink or Swim assists uninsured and underinsured people with medical expenses by orchestrating Web-based fundraising campaigns. The fundraising goals are fairly modest—typically in the realm of $2,000—but can make a real difference. The fledgling organization has helped recipients raise money toward expenses ranging from medical debt from chemotherapy, to a portable oxygen tank with a supplemental battery for an emphysema patient, to a wheelchair van for a quadriplegic. Shortly after Commencement, Leary spoke with Gazette associate editor Trey Popp about what keeps her committed to doing what amounts to “at least another full-time job.”

How does Sink or Swim work?

We help people who are uninsured or underinsured pay for medical expenses, using social media and social networking—so Facebook and Twitter. The idea behind it is that we get a large amount of people to donate small amounts of money to make a big difference in our recipients’ lives.

How does one become a recipient?

They come to us either through our website or through word of mouth. And I meet with each of these recipients. We go through their story, their situation. I figure out together with them what exactly they need assistance with, and then I verify all of their information through their physicians, nurse practitioners, billing and collection agencies, and insurance—just to make sure that everything they’re telling me is true. And once I verify them, all the money that we raise goes directly to the billing or collection agency. It doesn’t go directly to the recipient.

What gave you the idea to do this?

I used to be a critical care nurse in the medical ICU at HUP. And between that and having some friends whose family members had catastrophic illnesses and couldn’t pay for their medications or their medical bills, I realized I had to do something to help. In my past workplace, I used to produce special events for the city and nonprofits. So repeatedly friends would come to me and ask if I could put on benefits for their family members to help raise money. And I thought there had to be a more sustainable and innovative way to help people who were struggling to pay for medical expenses.

So how many people has Sink or Swim helped?

Because I’m doing this at night and on the weekends, right now we only have one recipient a month—just because that’s about as much as I can keep up with.

How much money do you generally raise for them?

On average we make close to $1,900 for our recipients. Again, the idea is that we’re not going to pay off all of your medical bills, but we’ll be a respite for you—one month where you don’t have to decide between food and rent or paying for your medical bills.

Have you noticed any kind of patterns regarding where the donations come from, or what sorts of recipients or stories seem to resonate more with people?

Because it’s a social networking-focused organization, the people who are active on Facebook and Twitter, I definitely see a trend towards more donations with those recipients. I try and tell the family that I want them to focus on their loved ones and their loved ones’ care and not have to worry about the fundraising. But it really does help when their family and friends share the story to their other social networks.

It sounds like you almost have a role as a consultant.

Definitely. It’s sort of Kickstarter for medical and healthcare issues, but with a consultant.

Do you have anybody else who works with you?

Mostly it’s a one-person shop, but I do have a couple dedicated board members. And of course I have great volunteers, as well … Actually, one of our biggest volunteers is a past recipient.

Why did he or she need help?

His name is Joe, and when he was 16 years old, he had an accident where he fell out of a window and broke his neck and was paralyzed basically from the shoulders down. And that was 30 years ago. His mother has done everything for him. And now she’s getting older and can no longer transport him. And he was desperately trying to raise money toward a wheelchair van. So obviously we couldn’t raise enough to get a wheelchair van for him. But we added to the money he was raising for this.

After our donation he was able to get a van. And ever since, every month he helps me with the social networking—like the posts we put on Facebook and Twitter. And he talks at events. Since he’s paralyzed from the shoulders down, basically, he’s on the computer a lot, so he’s able to do a lot of research for us.

Does he have the use of his fingers?

No, he has a specialized device for a computer—I believe he controls it by his mouth.

What does the future hold?

I would like to be able to write grants for Sink or Swim, so that I can hire staff who can optimize what is currently a micro-philanthropy organization into a much bigger organization that not only does fundraising but helps people beforehand work with the hospitals to reduce the amount of money they owe—and then help them find ways to sustain fundraising efforts, if needed.

Have there been any surprises along the way, or unexpected lessons learned?

Some good surprises. You know, before I did this, I was really sort of disheartened by all the badness in the world. And really the only reason why I started Sink or Swim is because it just pains me when people can’t pay for the care they need. And so Sink or Swim has really opened up my eyes to the complete generosity of strangers helping strangers.

A dollar. And, you know, if everybody gave a dollar, imagine how much money we could raise each month for people. That’s what I try and get across, that micro-finance nature of the organization. If everybody even just gave a dollar, it’d make a huge difference.

July 5 is Sink or Swim night at Citizens Bank Park, where the Phillies take on the Atlanta Braves at 7:05pm. Proceeds from tickets bought through philles.com/sosphilly will benefit the charity. 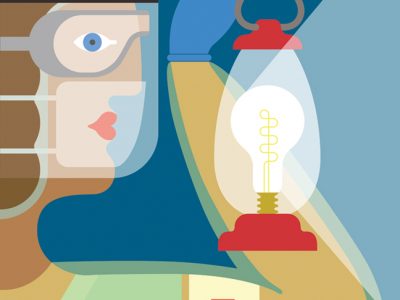 Features
In Nursing We Trust