“We are the latest in a long and celebrated line of individuals who have been given the privilege and the solemn responsibility of determining how Penn will meet this moment. How can the future be made better by what we do in the days to come?” said Penn President Liz Magill at her inauguration as Penn’s ninth president on October 21. (See our coverage of the day’s events here.)

Ten days earlier, Magill had posed a similar question when she launched Tomorrow, Together, an initiative designed to collect insights and opinions from across the Penn community to figure out, as she said in the announcement: “What does the world need from Penn? How do we cultivate a community that will rise to that challenge?” To pull together and make sense of those responses, Magill appointed a group—the Red and Blue Advisory Committee—headed by Annenberg School Dean John L. Jackson Jr. and made up of representatives from students, faculty, and staff. Comments are invited at tomorrow-together.upenn.edu/plan.

This approach seems well in line with the measured, collaborative style of leadership noted by several observers in our Sep|Oct issue profile of the president. And it also resonated for me in reading senior editor Trey Popp’s article in this issue, “Obstacle Course.”

The piece recounts Trey’s experience accompanying a group of student-athletes in the Penn Athletics Wharton Leadership Academy on an excursion in an upstate New York forest. The program uses various group tasks and challenges—building a tent, blazing a trail, finding and retrieving an object of some kind (some of the details are necessarily left murky)—to educate students in organizational dynamics and strengthen their ability to work in and lead groups, partly by recognizing when to take a stand and how to actively follow.

It is decidedly skeptical of, even hostile to, the traditional idea of the self-certain, hard-charging leader. (There’s a passage in the story, which I won’t spoil, that encapsulates the dangers of such leadership perfectly.) Along the way, Trey also talked with program faculty and students about some of the reasons young athletes today may be less prepared to lead and be accountable, in which the culture of youth sports comes in for a fair share of blame.

The value and responsibility of preserving and building on tradition is a theme in “House of Resiliency,” in which associate editor Dave Zeitlin C’03 combines historical research with the fond and vivid memories of former residents to recount the first 50 years of W. E. B. Du Bois College House. In the face of repeated bomb threats and other attacks over the years, the house nevertheless became a hub and anchor—a home—for Black students at Penn, which was often the case whether they lived in the house or not.

Like Penn, Du Bois has new leadership this year and is looking to the future while celebrating its past. Dave’s piece also deals with the impact of changing demographics among residents—though it’s always been open to other students, the percentage of Black residents has been shrinking over the years—at a time when broader housing and social options at Penn means that Du Bois no longer has to carry the full weight of serving Black students.

Note: The dictates of space (available pages) and time (our production schedule) required that we split our coverage of President Magill’s inauguration and of Homecoming Weekend and the Alumni Awards of Merit—which will appear, as they usually do, in the Jan|Feb issue. 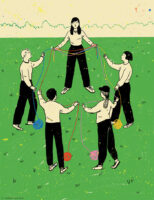