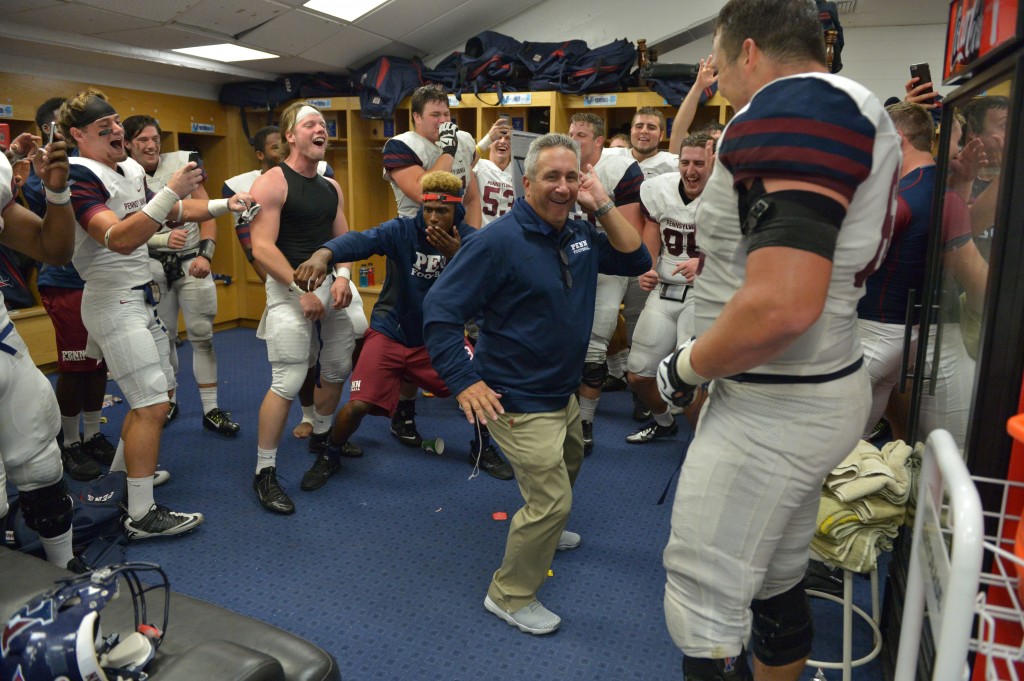 VILLANOVA, Pa. — Late Thursday night, in the visiting locker room at Villanova Stadium, Ray Priore danced in the locker room and Penn took a Snapchat of it.

This did not happen the last time Penn beat Villanova. Snapchat didn’t exist then. Neither did Facebook or Twitter. Or the Internet. Or television.

Before Thursday, the last time Penn beat Villanova, touchdowns were worth five points, there was no fourth down, and the “forward pass” was a new phenomenon.

There may have been some dancing but we don’t really know since there’s no footage from that Oct. 14, 1911 game when the Quakers, coached by Andrew Smith, shut out Villanova, 22-0. Probably not, though. Back then, Penn beat Villanova easily five straight times before the rivalry took a long hiatus.

When it resumed, the Wildcats won 14 straight in the series — until Thursday when the Quakers completely dominated both sides of the ball en route to a shocking but convincing 23-14 win at Villanova Stadium.

“It’s really tough to comprehend right now,” Penn football coach Ray Priore was saying after his dance party was over and he walked into the press conference room at Villanova Stadium to address reporters who never gave his team a chance. “Wow, just wow. It’s been a long time since this has happened.” 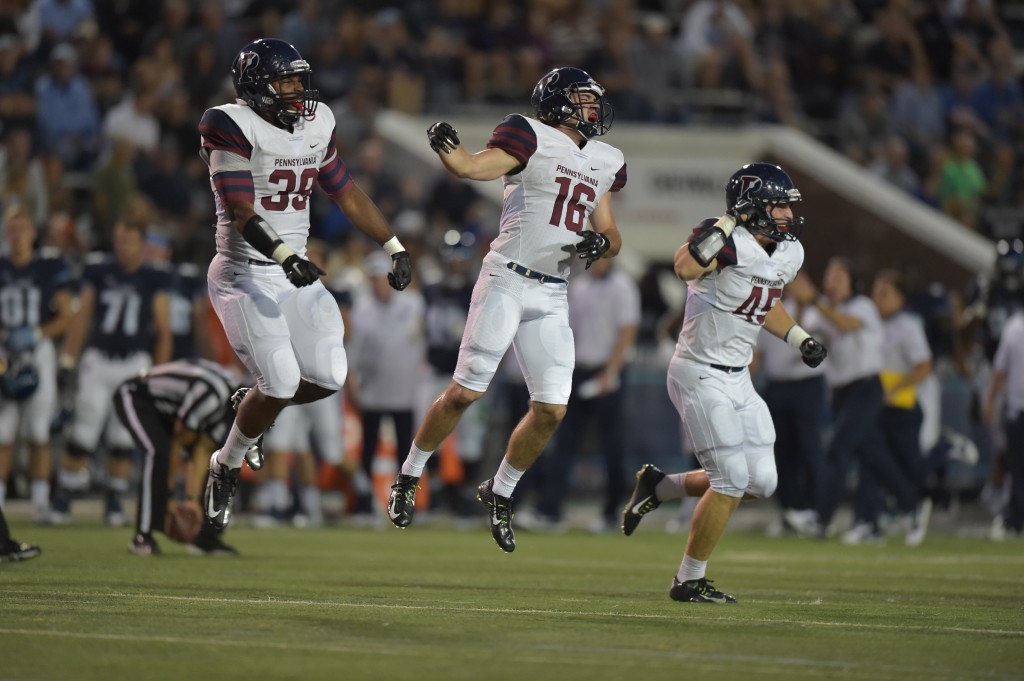 There was a lot to celebrate for the Quakers during their dominating win at Villanova Stadium (Penn Athletics).

Yes, 104 years is certainly a long time. As Priore pointed out, Franklin Field was only 16 years old then (though that’s probably a bad example since it’s the oldest football stadium in the country). Of course, it’s not an entirely fair statistic since Penn and Villanova only played once between 1912 and 1998. But the Quakers never shied away from it, perhaps because beating Villanova for them may have seemed like a once-in-a-century milestone after they suffered both a few near misses and a few ugly blowouts in recent years.

And who could have predicted the Quakers would snap the streak this year when they were picked to finish sixth in the Ivy League, lost by three touchdowns in their season opener to an average Lehigh team and were up against the fifth-ranked team in the FCS on the road?

“It’s crazy,” quarterback Alek Torgersen said. “For us to break a 103-year streak is unbelievable. It’s kind of just setting in that we did this.”

Torgersen was the main reason why the streak ended. While Penn’s win was certainly a team effort with big plays coming from offense, defense and special teams throughout the night, it was Torgersen who gave Penn the belief that they could pull off the upset, from the very first drive of the game when he led the Quakers on a scoring drive.

The junior quarterback was poised in the pocket. He masterfully controlled the clock and moved the chains to tire a strong ’Nova defense and keep the ’Nova offense from getting on the field and building any kind of momentum. He built a strong connection with sophomore receiver Justin Watson, who caught two touchdowns in the first half and looked like the most talented player in a game that featured scholarship players on only one of the two sidelines (not Penn’s). And, as Villanova head coach Andy Talley bluntly admitted afterwards, he was the better of the two quarterbacks as Villanova redshirt freshman Zach Bendarczyk struggled for most of the game while filling in for injured star John Robertson. 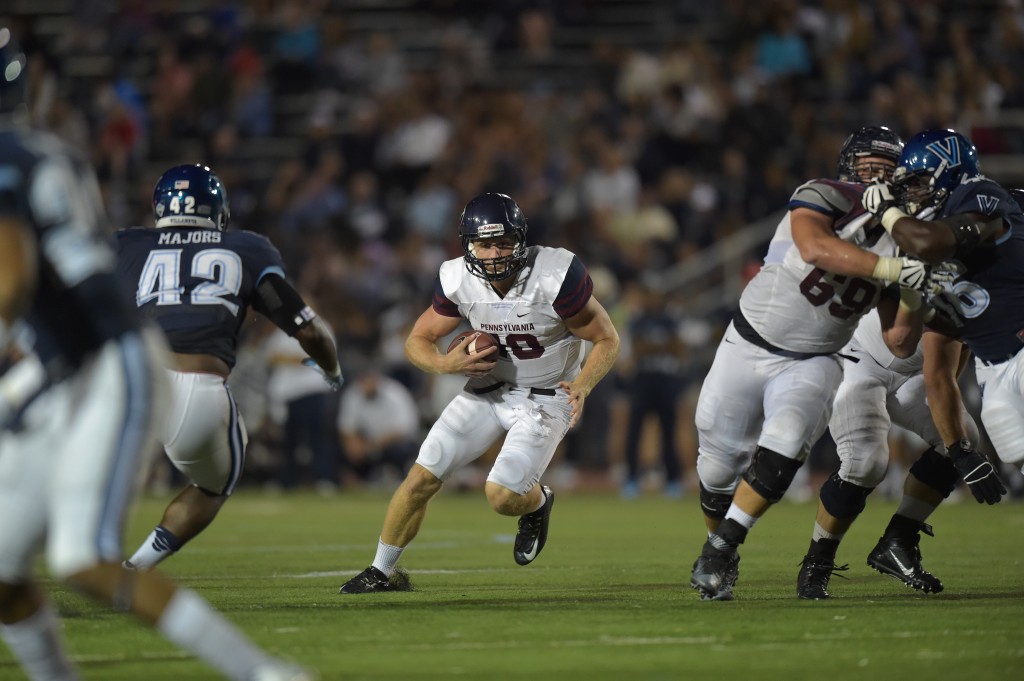 Penn certainly caught a break that Robertson, the best player in the FCS last year, didn’t play. It also helped that Villanova was hobbled on the offensive line. But as Priore said in the postgame press conference, the Wildcats were usually “business as usual” in past years when someone got hurt because their bench players were so good.

It’s a credit to Priore and his staff, then, that the Quakers took advantage of the hobbled ’Cats to the extent that they did, completely dominating the first half in a way absolutely nobody expected.

Bendarczyk and the Wildcats made a push after halftime but, in reality, this game was won in the first half. And to come out of the gates like that on the road, while then holding on and coming up with a huge 90-yard fourth-quarter fumble return touchdown to preserve the win, says a lot about the team’s preparations in what had been an offseason filled with uncertainty.

“It definitely feels great,” said senior captain Tyler Drake, who played in the last three losses to Villanova in which Penn was outscored by a combined score of 100-21. “It’s something that we’ve been working for. We focused throughout the whole offseason on really putting in a complete game and being able to win it in the fourth quarter. Defensively, we knew we were going to have to create turnovers in order to win the game. In years past, we weren’t able to do that. Today it really helped our offense. And our offense really helped us. It was really a complete win.”

Penn’s coaches always knew beating Villanova would take a complete game — maybe even something close to a perfect game. But legendary head coach Al Bagnoli, for all of his success in the Ivy League, was never able to do it in 13 tries.

The fact that Priore was able to do it in his attempt, combined with all the great things his players said about him in the preseason, should go a long way in helping Penn’s new head coach step out of his predecessor’s enormous shadow.

If nothing else, the new head coach got his first win out of the way in epic fashion and made sure to have a whole lot of fun when he did. Just check Snapchat.