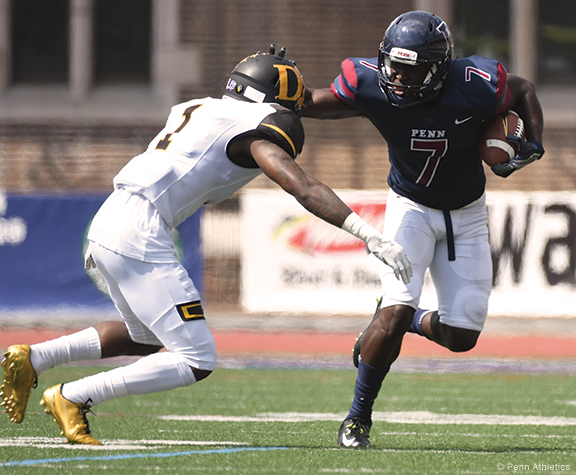 With Justin Watson NFL-bound, the football field is wide open.

Around the time Justin Watson W’18 was sprinting from his family’s hotel room to his off-campus house on 42nd Street, where his teammates were waiting to swarm him in celebration, senior Christian Pearson was holed up at a desk, furiously refreshing his phone.

Pearson, Watson’s fellow starting wide receiver for much of the past three years, had to be at his internship at a commercial real estate firm across town when Watson was selected by the Tampa Bay Buccaneers in the fifth round of April’s NFL Draft. But even at work, Pearson quietly reveled in “the miraculous event.” Watson became the first Penn player selected in the NFL Draft since Jeff Hatch C’02 went to the New York Giants in 2002.

Now, Pearson hopes to follow in Watson’s very big shoes when another Penn football season opens in mid-September: as the Quakers’ go-to receiver, as a senior leader, and, perhaps even, as an NFL prospect.

“I think the biggest thing I’ve taken from Justin is he taught me how to really grind,” said Pearson shortly before preseason camp in August. “Even though practice can get super hard, the lifts can get crazy, meetings can be tedious, he taught me how to keep a cool head and just push through it.”

Does Pearson—who has caught 83 balls for 1,143 yards and 13 TDs through his first three seasons at Penn—think he can pick up the slack?

“I do,” said Pearson, who spent his summer working out with a personal trainer and trying to improve his flexibility by doing yoga. “That’s exactly why I’ve been working so hard, because I know someone’s got to step up and fill that void.”

The Quakers will certainly count on Pearson, who Priore believes will “mature and grow” in his final season, along with fellow senior receiver Steve Farrell. But the head coach professes to be excited and relieved to have a more balanced look on offense, rather than simply relying on one player to bail the Quakers out whenever they need a big play.

“It will make our offense even more dynamic because we won’t just be targeting Justin all the time,” Priore said. “Now the reads will be full-field reads, and I think there will be more of an element of surprise to what we do.”

That’s not to say the Quakers won’t have any big-time playmakers. In addition to Pearson’s downfield ability, junior running backs Karekin Brooks and Abe Willows are coming off breakout seasons, and junior Nick Robinson and sophomore Ryan Glover are back to compete for the starting quarterback job after showing glimmers of promise last year.

On the defensive side, senior linebacker Nick Miller is a preseason All-American and the only Ivy Leaguer to be named to the Watch List for the 2018 Buck Buchanan Award (given to the most outstanding defensive player in FCS football), while senior safety Sam Philippi figures to be one of the leaders on an experienced unit.

Priore also pointed to senior placekicker Jack Soslow—who made 10 of 12 field goals, including a 51-yarder, last year—as a potential difference-maker as the Quakers look to rebound from a fourth-place finish in the Ivy League.

“I think we’re capable of playing a lot better football, and I think our kids are poised to do it,” Priore said.

Added Pearson: “We’re on the right path. And I think if we keep working toward it, we’ll end up with another ring.” 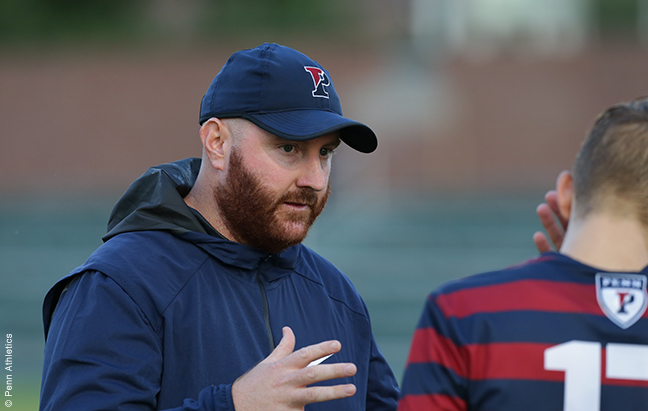 A New Direction for Men’s Soccer

Gill didn’t realize at the time how valuable those lessons would be, or how quickly he would need them.

Shortly after Fuller left the soccer program in February to move into an administration job as Penn’s senior associate athletic director for intercollegiate programs, Gill was hired to replace him.

Although the Quakers haven’t had a winning season since capturing the Ivy League title in 2013, Gill will have a lot to live up to taking over Fuller, who he said “built the program into its modern form.”

During Fuller’s 20-year tenure, the Quakers won three Ivy titles (2002, 2008, 2013), reached the NCAA tournament four times (2002, 2008, 2010, 2013), and had five players drafted by Major League Soccer teams. He also helped turn the program’s home at Rhodes Field into such a good facility that it’s often used as a training ground for national teams and European clubs when they come to Philadelphia. (Gill enjoyed watching Bayern Munich practice there in late July.) And, according to Gill, one of Fuller’s biggest strengths was simply how well he got along with alums and players over his two decades on the job.

“I think Rudy was the ultimate father figure for a lot of these guys,” said Gill. “I don’t know if he’s had any bad relationships with anybody. He’s just a really good people person.”

Gill spent the previous seven seasons as an assistant coach at Georgetown (Fuller’s alma mater), where he developed a reputation as one of the nation’s top recruiters. (Two of the guys he helped bring in, Keegan Rosenberry and Joshua Yaro, are now defenders for the Philadelphia Union.) And he thinks he’ll be able to keep recruiting at a high level, due in part to some of the similarities that Georgetown and Penn share as academic institutions, as well as the relationships he’s built since his playing career as a goalkeeper at Rider University in the early 2000s.

“The ability to connect with players is one side of recruiting,” he said. “The other side is judging people’s character.”

The next step for Gill will be trying to mesh the returners with the newcomers—about half of this year’s team hasn’t played a college soccer game yet—and building the program into a perennial Ivy League contender. From there, he has even greater ambitions.

“As an optimist, I feel like there’s good room for growth,” he said. “Is there an upward trajectory? Absolutely, because our starting spot right now isn’t great. We’re so far away from what the ceiling is, it’s hard to say where is the ceiling.”