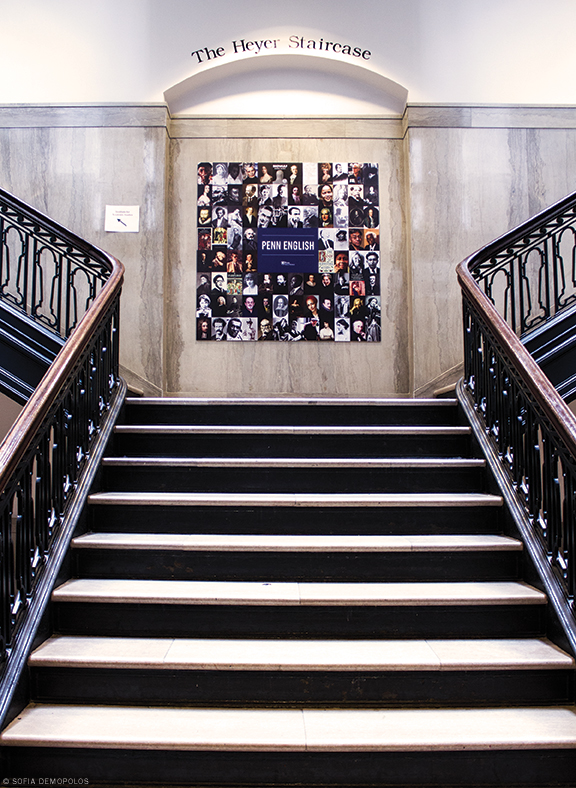 For many years, Penn students could expect the knowing gaze of William Shakespeare to greet them as they entered Fisher-Bennett Hall, home of the English department. The Bard’s monumental portrait had hung above the main staircase for decades, and over the years had accrued a smattering of lipstick marks where anonymous English lovers had kissed his likeness. But in December a group of students removed the portrait from its mount and delivered it to the office of department chair Jed Esty, the Vartan Gregorian Professor of English. In Shakespeare’s place, the students hung a temporary portrait of Audre Lorde, the black feminist author and civil rights activist.

The portrait swap garnered some national attention. “Shakespeare takes another hit,” proclaimed the opening sentence of an article in The Washington Post. The somewhat sensationalized copy contrasted with the mood in the Penn English Department, where in truth few people were that surprised about the switch. In a December email sent out to English majors and minors, Esty clarified that the department had for years been meaning to change the portrait to more fully represent the academic breadth of Penn’s English curriculum. Students had broached the topic at a town hall discussion in the wake of the presidential election, and removed the portrait shortly afterward “as a way of affirming their commitment to a more inclusive mission for the English department,” Esty wrote. He added, “That commitment is shared by the faculty.”

College senior Nora Henrie is an English major and a member of the Underground Shakespeare Company, a Penn theater group dedicated exclusively to performing the works of Shakespeare and his contemporaries. She said she had not heard any complaints about the switch.

“Shakespeare isn’t hugely represented in our classes, or usually when he is, it’s for cross-literary analysis. In general, there’s a lot of leeriness about traditional canons in English literature,” she said.

She wrote: “Colombian by birth and upbringing, I have never once felt intimidated, insulted, or demeaned by the act of studying Shakespeare. On the contrary, I consider it an honor to be able to study, at one of the country’s best universities, some of the most beautiful verse that anyone has ever written in the English language.”

The portrait’s removal has no bearing on undergraduates’ opportunity to study Shakespeare. This year’s course catalogue lists four courses dedicated to the study of Shakespeare; additional offerings cover his work as part of wider surveys.

This isn’t the first time Shakespeare’s portrait has disappeared. A 1998 student prank left administrators scratching their heads when the giant portrait vanished at the end of April, only to reappear in the arms of triumphant graduating English majors on Commencement morning [“Gazetteer,” Sept|Oct 1998].

Interestingly, before that theft was revealed to be a lighthearted prank, some faculty interpreted it as a political statement in the same vein as the December removal. They came to this conclusion upon finding a collage of women writers in Shakespeare’s place. Yet the pranksters had exposed this artifact unwittingly. Students had pasted these photocopied portraits to the wall during the 1994-95 school year, when the canvas was taken down for cleaning, and those images were simply left on the wall behind the portrait when it was remounted. Clearly, Shakespeare’s place of honor on the stairwell has been on students’ minds for longer than the past election cycle.

“The department will continue to explore, in all of our classes, the meaning of important works produced by artists and writers well before Shakespeare and well after Lorde,” Esty wrote. “We invite everyone to join us in the task of critical thinking about the changing nature of authorship, the history of language, and the political life of symbols.”

With this in mind, the department has replaced the Audre Lorde portrait with a more inclusive collage of writer likenesses and literary works. From Thomas Mallory and Christine de Pisan, to Zora Neale Hurston and Zadie Smith, the faces of authors of many eras and origins now grace the most coveted wall-space in Fisher-Bennett Hall. Among them are both Lorde and Shakespeare—only a little smaller, and immersed in larger company.