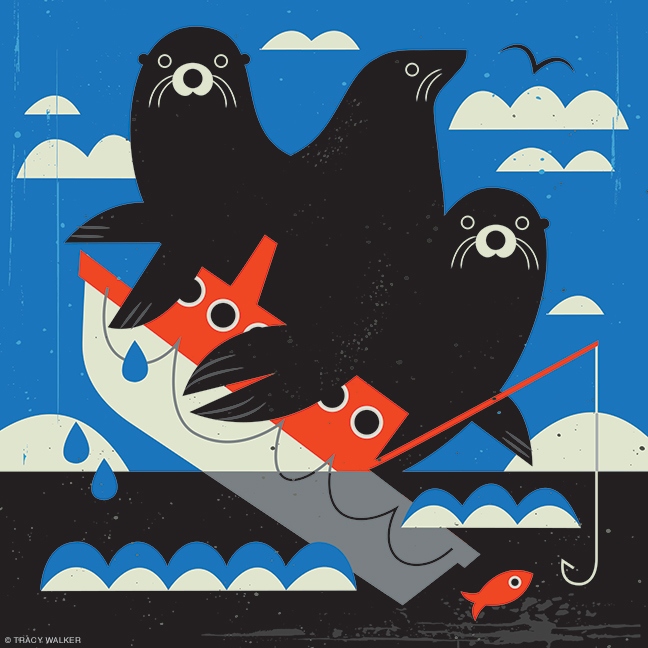 “Imagine a 500-pound squirrel went into College Hall and just plopped down. That’s kind of what you’re seeing here,” explains Michael Weisberg. He’s talking about sea lions, which are a common sight on San Cristobal Island, a part of the Galapagos archipelago, about 600 miles off the coast of Ecuador. Also, like squirrels, roly-poly sea lions are docile—for the most part. But, Weisberg says, people need to remember: “They are wild animals that are 500 pounds, with big, sharp teeth.”

Weisberg is a professor and chair of the philosophy department; Vaca is a Galapagos naturalist guide who has lived on the island for more than 30 years. The two codirect the Galapagos Education and Research Alliance, along with Deena Weisberg, a senior fellow in the psychology department.

The Alliance is focused on promoting ecological understanding through community-based initiatives, and Laboratorio Para Apreciar la Vida y el Ambiente (Laboratory to Appreciate Life and the Environment), or LAVA, is its first project. The two key players are native sea lions and local high schoolers.

For decades, Galapagueños lived peacefully with sea lions, the endangered marine mammals that serve as “the face of San Cristobal,” according to Vaca. But in the 1970s, as tourism increased, the human population started growing right along with the population of sea lions, and the groups found themselves competing for fish—and space.

Inch by inch, the sea lions are reclaiming the only place where Galapagueños can legally live: the 3 percent, or roughly 100 square miles, of the archipelago that is not designated as national park territory. On the small island of San Cristobal, with a human population of 8,000, there are about 2,200 sea lions. They’re on the beaches, in the streets, and sprawling on any other flat surface they like.

Weisberg adds, “There have been times when four or five come on the boat, and it starts to sink.”

Yet because every animal on the Galapagos enjoys certain protections, there are limited actions that can be taken. “There’s the two-meter rule that dictates how close you can get to them. But the overarching rule is that you’re not supposed to affect their behavior,” Weisberg says.

So fishermen have responded by putting barbed wire on their boats, which injures the more stubborn sea lions—and little by little, the tension builds. “It’s a pressure cooker,” says Weisberg.

The tension peaked several years ago on New Year’s Eve, when the municipality had its first public fireworks display. At the first blast, 300 terrified sea lions lumbered off the beach into the water, abandoning their pups. The celebration quickly soured in the face of that disturbing sight.

Sea lions are valued in the community for many reasons. For one, they serve as a sentinel, providing information about marine pollution and the health of the oceans. Because of this, the community feels protective; however, they don’t necessarily have the tools to turn their feelings into action. One example: there is no biology teacher for the AP program at UAE-San Cristobal, the high school Penn works with.

“So Penn, in partnership with the naturalist guides, has been training these high school students to do real—and I’m serious—real science,” Weisberg says. “We train these students as well as we would train a graduate student.”

The team from Penn, which also includes two graduate students and four undergrads, spends a few weeks teaching the basics of observational field work. Then the undergrads stay an additional two months, making sure the high schoolers are comfortable with the data collection process.

Throughout the rest of the semester, the high schoolers observe and collect hundreds of data points about sea lion behavior, sharing their findings with the naturalist guides and the team from Penn. They count sea lions, record their age and sex, and note how clustered together they are at three different sites. They also measure the animals’ reactions as they slowly approach within two meters.

“The students are becoming the genuine experts of the sea lions on these beaches,” says Weisberg. And in turn, they take this knowledge back to their parents, their neighbors, and their community and teach others.

The initial student cohort finished last December and a new one starts in May.

Already, they have produced results. On January 1, 2018, at 12 a.m., Galapagueños rang in the new year on San Cristobal—this time without fireworks. The switch was likely due to shifting attitudes fostered by the LAVA project.

“Part of our goal as educators is not just to teach the science but to teach the attitudes too,” says Weisberg. The hope is that students will take ownership of the project—and they have.

“One of the things we saw during the course of the project was a shift towards internal motivation,” Weisberg says. “Actually doing the research themselves really shifted the students’ attitudes. It’s part of them now in a profound way.”

Vaca agrees. “For me, to listen to these kids that I’ve known since they were little … it was shocking to hear how deep their reasoning is after seven months of watching the sea lions.”

In her notes, 17-year-old Karla Villagómez reflected, “I have come to understand aspects of the daily life of sea lions and their importance … I have realized that sea lions have unique personalities, and I did not hold this opinion before the LAVA project.”

As part of its work, the Alliance is installing platforms for the sea lions to sleep on. The idea is that by providing floating docks, the sea lions will gravitate to them instead of fishing boats and fishing docks. The platforms will be equipped with cameras for continual observation, as well.

Three years ago, when they first met (during a Penn Alumni trip that Weisberg was leading), Weisberg asked Vaca, “What does the Galapagos need?”

As he recalls, Vaca replied, “Look, all of the outside effort is focused on the animals. And of course we want to save the animals and the plants and the biodiversity that’s here. But there’s 30,000 people who live on the islands, and we can’t save that without thinking about people and education.” —NP