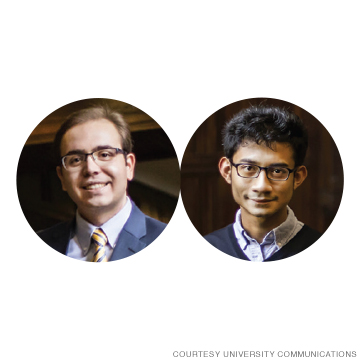 Two Penn seniors were named among the 2018 Rhodes Scholars. Christopher D’Urso, from Colts Neck, New Jersey, was one of 32 Americans to receive an American Rhodes. Adnan Zikri Jaafar, from Malaysia, was the sole recipient of a Malaysian Rhodes. Both will pursue graduate degrees at Oxford University, in the UK.

D’Urso, a College senior studying international relations with a minor in Hispanic studies and a submatriculant pursuing a Master of Public Administration with a Certificate in Politics at the Fels Institute of Government, says he has had a steady goal since he was in elementary school. “Ever since I was eight years old, I knew I wanted to go into law and politics,” he says. He elaborates, “When I was little I used to watch The People’s Court.”

At Penn, that seed blossomed into a passion for public service. He founded the student group Penn CASE (Penn Consumer Assistance, Support & Education), inspired by a high school internship with New Jersey’s Monmouth County Department of Consumer Affairs investigating 70 fraud complaints. That experience resonated with him since he was attuned to these issues in the wake of Hurricane Sandy. Penn CASE has worked in West Philadelphia to educate citizens about consumer fraud and offer resources to help them protect themselves. D’Urso says that the group has been able to reach more than 2,500 people.

At Oxford, D’Urso plans to pursue a Doctorate in Public Policy and will attend Yale Law School upon returning to the US.

Jaafar is a senior in the Huntsman Program in International Studies and Business. He recounts his time at Penn as a journey with ups and downs. “Freshman year was really hard—everything was very different,” he recalls. “I didn’t use English in my daily conversation until the last two years of high school, so English was not something I was comfortable with.”

Two shifts occurred after freshman year that changed his time at Penn. First, Jaafar became a research assistant to Peter Fader, the Frances and Pei-Yuan Chia Professor of Marketing. That fostered a lasting interest in research; Jaafar would go on to become a Fox Research and Service Fellow and a Wharton Research Scholar. Second, Jaafar worked abroad the summer after his freshman year with refugee populations in Jordan. “I saw Syrian refugees getting basic minimal education. They’re probably not going to get a certificate or grades. Their future is not clear. But they’re still very passionate about learning,” he recalls. “That changed the way I think about my education—how should I approach my education.”

At Oxford Jaafar plans to pursue masters degrees in social policy and economics.

D’Urso and Jaafar were both assisted by the Center for Undergraduate Research and Fellowships in their applications. 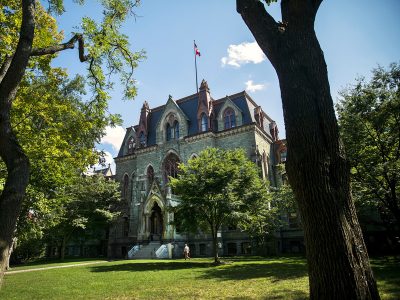