Multiple Classes | Fixing urban public schools—and closing the performance gap with suburban districts—is a perennial challenge for educators. The Rhode Island Mayoral Academies, a group of regional public charter schools run by mayor-led boards, have found a formula that has already shown considerable promise. Over the past five years these schools have outperformed most of their Rhode Island peers on standardized tests by tweaking the standard public-school model.

Students, chosen by lottery, come to school earlier and stay longer than many of their peers, typically logging at least one Saturday a month and receiving up to 400 more hours of instruction time over a given school year than in average public schools. Those additional hours mean that teachers can devote plenty of time to such core subjects as English, math, and science, while still allowing for art, music, technology, and other “extras.” The schools have a direct say in recruiting and hiring teachers, who are not part of the teachers union but earn about 10 percent more than their unionized peers with the same level of experience.

The model is the product of collaboration among several Penn alumni, notably co-founder and CEO Michael Magee G’99 Gr’99, philanthropist Alan Hassenfeld C’70, and Jeremy Chiappetta C’95, executive director of Blackstone Valley Prep (BVP), a group of three schools under the umbrella of the academies. The schools also have received the backing of Rhode Island Commissioner of Education Deborah Gist GrEd’12.

For Hassenfeld, former chairman and CEO of Hasbro, Inc., the schools’ entrepreneurial focus and innovative spirit made it an attractive model to back financially.

“I liked that the mayoral academies would be starting from scratch, building schools based as purely on best practices as possible,” he says. “I liked that the people involved were willing to take a risk, and that talented leaders were given the flexibility to run their organizations and schools to maximally benefit children and families. Simple in concept, difficult to achieve in practice.”

They’ve achieved quite a bit already. BVP, whose three schools serve about 1,000 students in grades K-8, recently reported that those students scored above the state average in all grades and subject areas. More than 90 percent of its seventh-graders are proficient in math—one of the highest percentages in the state—and its eighth-graders have outperformed their peers from the wealthiest suburban districts.

The excellence continues among BVP’s teaching staff, with a middle-school math instructor recently winning a National Milken Educator Award and another teacher being named the state’s Art Educator of the Year.

“Our goal is to have excellent teachers and have them want to stay and build a community with us,” Magee says. “The people who founded and led our schools have built a culture of continuous improvement, and they are nimble. When things aren’t working as predicted, they are willing to pivot and make changes.”

Behind the numbers and accolades are the many students whose lives have been transformed by their experiences at BVP. (The schools are open by lottery to an economically diverse mix of students, with roughly two-thirds coming from low-income families and the rest from middle-class homes.) One five-year-old boy from Guatemala, for example, came to school the first day unable to speak Spanish, let alone English. According to Magee, the staff rallied around him, providing speech pathology and other necessary services to help ease his cultural transition. The boy recently scored the highest marks in his fourth-grade class on the statewide assessments.

“The school has been life-changing for him,” Magee says.

As a Penn graduate student, Magee spent much of his time in the English department exploring the relationship between literature and language and social change. Through his mentor, Al Filreis, the Kelly Professor of English, he worked with the Penn/Edison project, and later helped Filreis found Kelly Writers House. He gained further insight into urban challenges via his wife Susanna, his wife Susanna, who was attending Jefferson Medical College and running a mobile needle-exchange program in North Philadelphia.

His postdoctoral teaching jobs eventually brought him to Rhode Island School of Design in Providence. But his career took a new turn when he met Dan McKee, the mayor of Cumberland, Rhode Island, who wanted to transform the state’s public schools.

McKee recruited Magee to help launch a community program offering everything from early childhood-literacy programs to SAT prep courses. The two joined a bipartisan coalition to change the state’s charter-school law to enable the mayoral academies concept. That work brought Magee in contact with Hassenfeld, who became an early backer of the mayoral academies. (Each school requires about $250,000 in startup funds, which are raised from private sources.)

“What was unique was that we had a broad group of mayors interested in spending their own time and energy and political capital to change the system,” Magee says. “Mayors have relationships across the entire system and state, at the grass-roots level and with small business and philanthropy, so we were able to build a pretty broad coalition.”

For Chiappetta, who represents the first generation of his family to go to college, the opportunity to lead BVP dovetailed nicely with his experiences at Penn. He became aware of the urban education gap while president of the Newman Society, and as an intern with the mayor’s office working closely with Project H.O.M.E.

Having taught in Harlem through the Teach for America program before earning an MBA from Yale, he realized that education was his true calling. So he came to Rhode Island for a two-year fellowship through the Broad Residency in the public schools. There he became frustrated by work rules that, among other things, prohibited teachers from volunteering to paint their classrooms. He eventually met Magee, who recruited him to help launch BVP in 2010.

To Gist, who formed a working group to help other charter and non-charter schools follow BVP’s lead in becoming more autonomous, the academies model represents the best of what can be accomplished by committing to high standards for teachers, providing state-of-the-art materials, and having the flexibility to develop programs that work and to drop those that don’t.

“They pay attention to every single student, individually,” she says. “Their commitment is [ensuring] that every student is making progress and becoming proficient.”

This fall, BVP’s first high school will open to ninth-graders, and plans call for an additional elementary school and two more middle schools to open by 2017.

“It’s been an incredible window for me into the things I used to write about academically but hadn’t experienced in such detail on the ground,” Magee says. “Educational reform is very much a large-scale social-change movement. In order to change the way K-12 public schools behave, you have to change the hearts and minds of a lot of people, and their behaviors.” 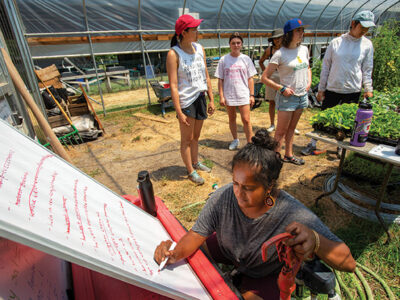