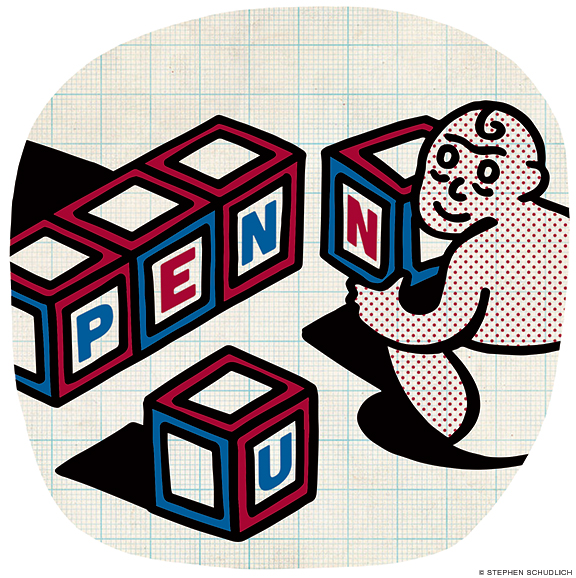 “Actually, I blame you.”

I am on the phone with Jim O’Donnell, trying to suss out how, when, and why the term UPenn emerged as an alternative to Penn, and he is only half-kidding.

Well, maybe three-quarters. O’Donnell, the former professor of classical studies who was Penn’s chief information officer in the late 1980s—or “head computer wienie,” as he puts it—actually means to blame my employer, the University of Delaware. The story starts, he says, “back at the dawn of time,” when he was working with Ira Winston EAS’80 G’83 WEv’05, who was then a systems administrator for the computer and information science department, on a project that involved a computer-network collaboration between the two schools.

“We determined that we needed a ‘domain name,’” O’Donnell says, recalling an era when that was an exotic term. “The guy from Delaware said theirs would be UDel. So we said we would be UPenn.

“Now, understand, this was chosen at a time when it meant nothing.”

But soon it very much began to mean something, especially when the University began a broad-based branding effort under President Judith Rodin CW’66 Hon’04. As the various schools and centers synchronized around a standard logo and nomenclature—adopting monikers like Penn Nursing and Penn Vet—attention turned to the domain name. Could the school’s website change from www.upenn.edu to www.penn.edu, and people’s email addresses from name@upenn.edu to name@penn.edu?

“The pushback was that that would be expensive and complicated,” O’Donnell remembers. “The implicit argument was that it wouldn’t be worth the bother.”

Meanwhile, the domain name had begun to influence the way some people talked about the University. That is, some people began referring to it as UPenn.

Reader, you may doubt that—and the longer ago you graduated, the deeper your doubt is likely to be. But they did and, increasingly, they do. I have semi-scientific proof. Steve DiNardo, a professor of cell and developmental biology, told me by email: “I almost always use UPenn. When I first got here in 1998, I often had to distinguish between Penn State and Penn. So I adopted UPenn to try to finesse/head off the issue.”

That’s not the semi-scientific part. That part comes courtesy of a survey DiNardo helpfully administered to the 50 graduate students who work in his lab. Thirty responded, and they were roughly equally divided between Penn and UPenn users.

DiNardo’s rationale for his choice—to differentiate the school from Penn State—is telling, but also somewhat puzzling. The first use of UPenn in the archives of The Daily Pennsylvanian is a 1978 article that referred to a “UPenn Not Penn State” T-shirt. The University’s online style guide says that while Penn is the officially sanctioned term, UPenn is “permissible … in situations where it may help to distinguish Penn from other universities within the Commonwealth of Pennsylvania.” (Nod nod, wink wink.)

The puzzling part is that UPenn—following as it does the models of UConn (University of Connecticut) and UMass (University of Massachusetts)—actually sounds more like a state school than Penn does.

As official and seemingly inevitable as Penn now feels, it originated as a maverick usage, much as UPenn has. From time immemorial, the informal name for the University of Pennsylvania was Pennsylvania. One of the first uses of the new term in The New York Times came in a 1908 football article that observed, “It was brilliant ball that the Penn eleven played.” (From its founding in 1902 until 1918, the Gazette was known as Old Penn. –Ed.)

Penn got a boost not too long afterwards from its shout-out in “Fight On, Pennsylvania,” with lyrics by Ben McGiveran C’23 and music by David B. Zoob C’23: “Then fight, fight, fight, Pennsylvania,/Fight for Penn.” Another song of similar vintage—the Cornell drinking anthem “Hairy-Chested Men”—declares, “Princeton’s for the pretty boys and drunkards go to Penn.”

Penn and Pennsylvania jockeyed for supremacy as the familiar name for the University through the 1960s. By the ’70s, Penn had prevailed: in The Record yearbook editions of that decade, the only place Pennsylvania is found is on the front of sports uniforms. (That tradition persisted. Men’s basketball jerseys didn’t make the change toPenn until 2002, and football uniforms still say Pennsylvania.)

Influenced by the upenn.edu domain and the comparable appellations of UConn and UMass, UPenn appears to have had a growth spurt in the late 1990s and early 2000s. The 2004 edition of The Insider’s Guide to the Colleges quotes an unnamed Penn senior: “I didn’t really know what I was getting into when I chose to come to UPenn, but I don’t think I would have been happier anywhere else.” And UPenn was regularly used by Jacques Steinberg of The New York Times covering the college admissions beat in the late 2000s and early 2010s—both reflecting and amplifying the term’s popularity.

At this point, it’s out there. Some data points:

• From the 2015 novelization of the TV series Pretty Little Liars: “‘She told me he’s studying to be a doctor,’ her mother swooned. ‘At UPenn.’”

Of course, UPenn is still far from the dominant term. A Google search for the phrase “goes to Penn” yields 67,000 hits (excluding “goes to Penn State”), compared to only 14,300 for “goes to UPenn.” College senior Dan Spinelli, executive editor of The Daily Pennsylvanian, says that both the DP and people in his social circle use Penn. “It would be weird for students to use UPenn among themselves,” he says. “I generally only hear it among international students, or talking to someone outside, like a friend’s parents. I remember when I went to a debate tournament senior year [in high school], I told people I was going to UPenn.”

Even so, the University appears to be a bit nonplussed by that term’s persistence.

“Penn is the registered mark of the University and is used on stationery, web pages and as the primary substitute for using the full University name in publications and other external communications,” the University’s style guide states. Apart from the exception for distinguishing Ben Franklin’s university from other institutions in the Commonwealth, or when referring to the University in foreign countries, “where UPenn is often the more common recognition,” it continues: “Questions concerning the usage of ‘UPenn’ can be directed to University Communications.”

I did in fact direct a question concerning the usage of UPenn to University Communications, but the issue is apparently sensitive enough that that office professed to have “nothing to offer” about the subject.

And the term bemuses Penn people of a certain vintage. Doris Cochrane-Fikes CW’72, a longtime administrator who retired in July, says, “I once saw someone on Locust Walk wearing a UPenn Med shirt, and it just jarred my soul.”

The current state of play would seem to be the following: Older alums, humanities professors, staff members, and current undergraduates almost always use Penn. But once one gets away from that bastion—to Wharton, medical, and science faculty; international students (especially on the graduate level); and high school seniors talking about their college choices and other outsiders—UPenn is ascendant.

In some cases, however, neither one does the trick. Dan Spinelli reports, “When I went to a bank branch in New Jersey to get a debit card, I said I went to ‘Penn,’ and the teller had zero idea what I was talking about.

“So now I just say University of Pennsylvania.”

Ben Yagoda G’91 is a professor of journalism at the University of Delaware and the author, most recently, of The B Side: The Death of Tin Pan Alley and the Rebirth of the Great American Song [“Arts,” Mar|Apr 2015].