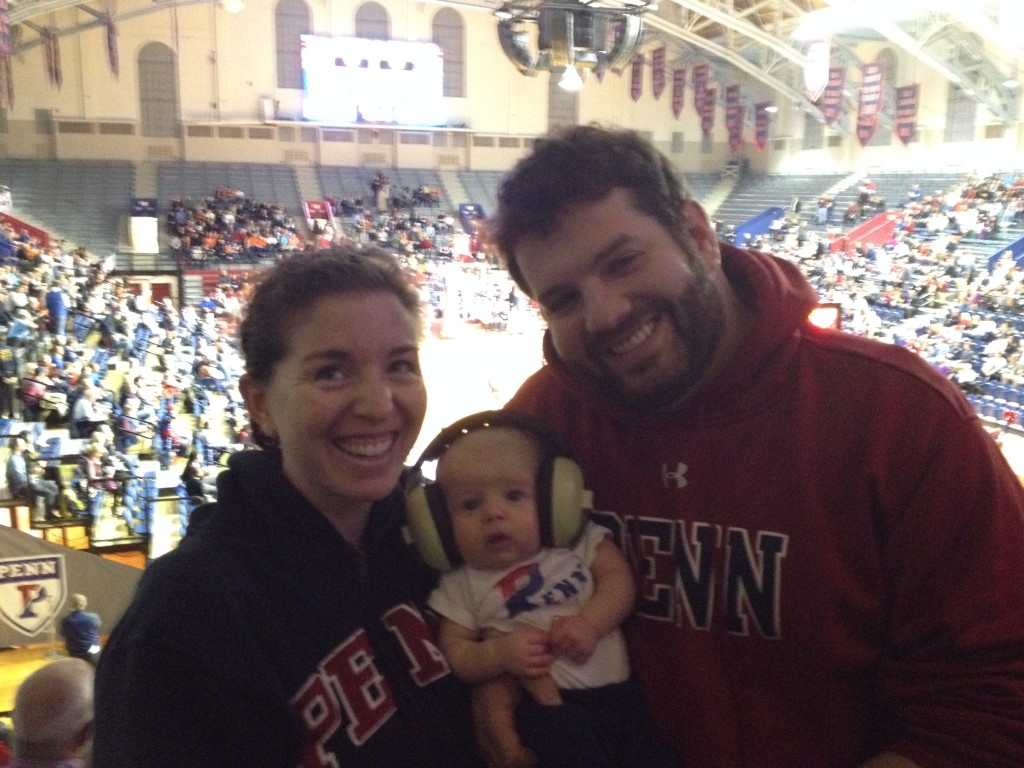 I was a freshman in college the first time I saw Penn play Princeton at the Palestra. It was the final game of the 1999-2000 regular season, and I cheered from Section 215 as Michael Jordan C’00 and the Quakers capped off a perfect 14-0 Ivy League season with a 73-52 rout of their biggest rival. Naturally, I was hooked.

The following year I rushed through an astronomy exam to get to the Palestra in time for the start of the Penn-Princeton game. The year after that I sat on press row as a Daily Pennsylvanian columnist as the Quakers beat the hated Tigers to force a three-way tie for the Ivy League championship, setting up a makeshift conference tournament in the only league that doesn’t have one. The next year, as a senior, I walked the gym’s hallowed halls with famed Palestra custodian Dan Harrell, who told me before the game that the Quakers would beat Princeton by ten points – which they did. Exactly.

Even after graduating from Penn in 2003, I still went to every Penn-Princeton game at the Palestra as either a reporter or a fan. I was there in 2012 when Zack Rosen W’12 and the suddenly upstart Quakers thumped the Tigers for their first victory over Princeton in three years. I was there for the games in 2006 and 2007 when Penn held Princeton to 41 and 35 points, respectively. And, most memorably, I was there in 2005 when the Quakers somehow came back from a 14-point deficit in the final seven minutes to stun a veteran Princeton team and set off a wild court-storming at the Palestra. (I didn’t rush the court but I still watch the highlights of the crazy finish often.)

And yet, of all of the Penn-Princeton games I’ve ever been to, none have meant as much to me as the one played this past Saturday.

No, this game wasn’t for a championship. There were no crazy comebacks. And while the Quakers played their best game of the year to pull off an early-season upset, the building wasn’t as full or as loud as it usually gets for Penn-Princeton games because students were on winter break.

But it was special for a different reason. It was special because I got to watch it alongside someone taking in his first Penn-Princeton game, just like I did 14 years ago.

It was special because I was there with my three-month-old son.

Knowing that I’m a sportswriter and a big sports fan, people sometimes ask me what teams my son Noah will like. Forgetting the fact that he’s an infant whose main interests are rolling onto his tummy and blowing raspberries (the latter of which came in handy when we were telling him about Princeton), I’ve always found these questions hard to answer.

Most people might assume he’d be a Mets fan and a Giants fan like me. But I grew up in New York and he’s almost certainly going to grow up in Philadelphia, where being fans of those teams can, um, get you in trouble. Besides, having been in Philly for more then a decade myself, my interest has slightly waned in those teams. So I really will do my best not to push any team or sport on him.

Well, maybe except for Penn basketball.

For me, there’s always been a different, more personal, connection following the Quakers as compared to other teams. While in college, I got to know all of the players and followed them to three NCAA tournaments (one as a fan and two as a student reporter). After college, I enjoyed deep conversations with introspective point guard Zack Rosen and couldn’t help but smile when senior Miles Jackson-Cartwright yelled to me on press row, “We ain’t going nowhere, Dave” during an especially impressive comeback against Temple earlier this season.

Of course, most of my best memories have come from inside the Palestra, which pulls off the neat trick of simultaneously feeling like a creaky museum and a cozy home. The loud, old gym is where I covered my first basketball games and realized I wanted to be a professional sportswriter; where I met some incredible people, including the aforementioned Harrell and the late, great PA announcer John McAdams; and even where I took photos with my groomsmen before my wedding two summers ago (no, wearing black suits inside the perpetually hot gym in July was probably not the smartest thing to do before walking down the aisle.)

It makes sense that many college basketball fans move on from their teams after graduating. But for me, that was never really an option; Penn has simply become too embedded in my life. My wife also went to Penn and now works there. We got married there (at the Penn Museum and World Café Live; not the Palestra) and our son was born there. And I returned a few years ago to begin covering the team again for the Gazette and CSNPhilly.com (don’t worry, I take off my fan hat when I’m working).

Penn is such a huge part of my family’s life that people often ask us if Noah will go to school there. Just like with the sports fan question, we don’t really have a good answer (except to joke that he’s forbidden to go to Princeton). Of course, my wife and I would love it if he went to Penn, only because of how much we enjoyed our time there. But that’s so far down the road and, just like with everything else, we’ll want him to carve his own path in life.

In the meantime, I’ll simply settle for taking him with me to games at the Palestra, where I’ve always felt like I’m a part of something special.

Maybe he will too.

As someone who’s been to a lot of Penn games over the past few years – as the team fell off its perch of Ivy League supremacy and attendance sputtered because of it – I was concerned about what the atmosphere would be like for Saturday’s game.

But even though the Quakers came into the game with a disappointing 2-10 record, the matchup was the earliest one, by date, ever played by the two arch-rivals, and the gym wasn’t filled to capacity, it still felt like, well, a Penn-Princeton game.

Perhaps there’s just something in the air when these two historically dominant Ivy League teams meet at one of the country’s best college gyms, even if both have been surpassed in the conference pecking order by Harvard. Perhaps we’re holding onto our memories of those days, as recently as 2007, when Penn and Princeton went back and forth winning every Ivy League title and gave us so many championship-clinching games to remember. And perhaps, now, we’re spreading those memories of an incredible rivalry to new generations of basketball fans.

So as the game tipped off, I stood my little three-month-old on my lap and showed him the gym floor that’s been stepped on by many great basketball players in the past. I told him about the future promise of Penn’s star sophomores, Tony Hicks and Darien Nelson-Henry. I sang the Highball with him at halftime. I even took a break from watching the game to show him the antiquated Palestra men’s room when a leaky present caught me as off guard as a post defender trying to stop one of Princeton’s patented backdoor cuts. (As I changed his diaper, the thought struck me that I was doing something I had never before done in 15 years of Palestra visits.)

The cool thing about Noah’s age is that you can see all of the things he’s absorbing. It’s a beautiful sight to watch your baby’s eyes open, darting around the room (in this case, a gym), learning something new about the world.

But another thing about babies this age is they require a lot of sleep. So as Penn let a lead slip away and then rallied in the final minute for an exciting win, Noah was immune to the late-game tenseness, snuggled in his mother’s arms, his pacifier in his mouth and his noise-canceling headphones over his ears.

It was too bad he missed it. I’ll just have to tell him all about it during next year’s Penn-Princeton game.