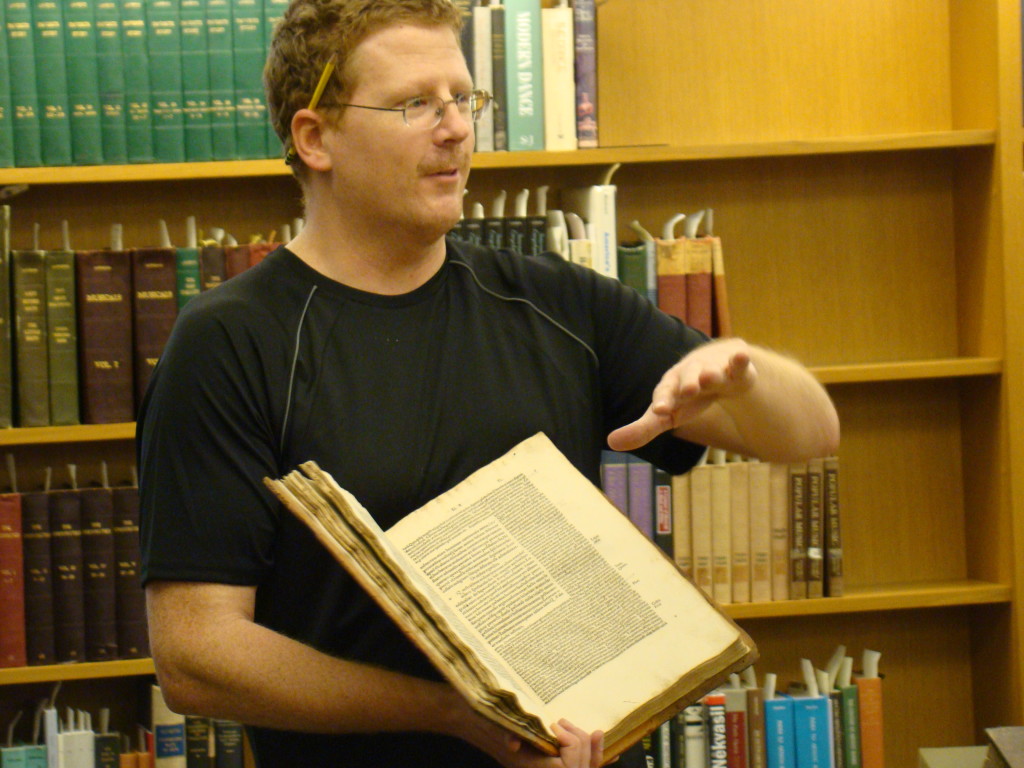 It’s a sizable book — about 8.5 inches tall and 6 across — and its colorful text and images are still vivid, even against the yellowed sheets. It was made sometime around 1215-1220, likely for a royal audience, and possibly in northern France. But now its beautiful pages are scattered around the world.

Out of the book’s original 440 sheets, 160 were in The Ohio State University’s collection when Johnson arrived as curator of early books and manuscripts in 2008. Several years ago, he decided to seek out as many of the other pages as he could.

He found a few in nearby Akron, Ohio, and then another leaf turned up in Georgia. He tracked down another sheet on the West Coast, and still another in Australia. It became an obsession, equal parts fantastic reward and hair-pulling frustration, he says. He has now amassed 183 pages of the original 440. “It has really gotten a bee in my bonnet to do whatever we can to reconstruct this bible,” he adds. “And really, the best way to do this is digitally. There’s no chance, even if I hit a massive streak of luck, that I would ever be able to reconstruct this bible in its entirety.”

In other words, Johnson is perfectly suited to use the very service he’s now shepherding into existence: Manuscriptlink. The soon-to-launch “virtual library” will reunite digitized pieces and pages of medieval manuscripts that have been split apart and now live in schools, libraries and institutions around the country. Fifty institutions agreed to post their holdings initially and, following a public announcement in November, about 25 more have come on board. “I don’t think there’s a week that’s gone by since we announced this where we haven’t gotten multiple queries and offers,” says Johnson, who will co-direct the site with University of South Carolina English professor Scott Gwara.

We spoke with Johnson last week about “book breaking,” digital reconstruction, and falling in love with old texts. 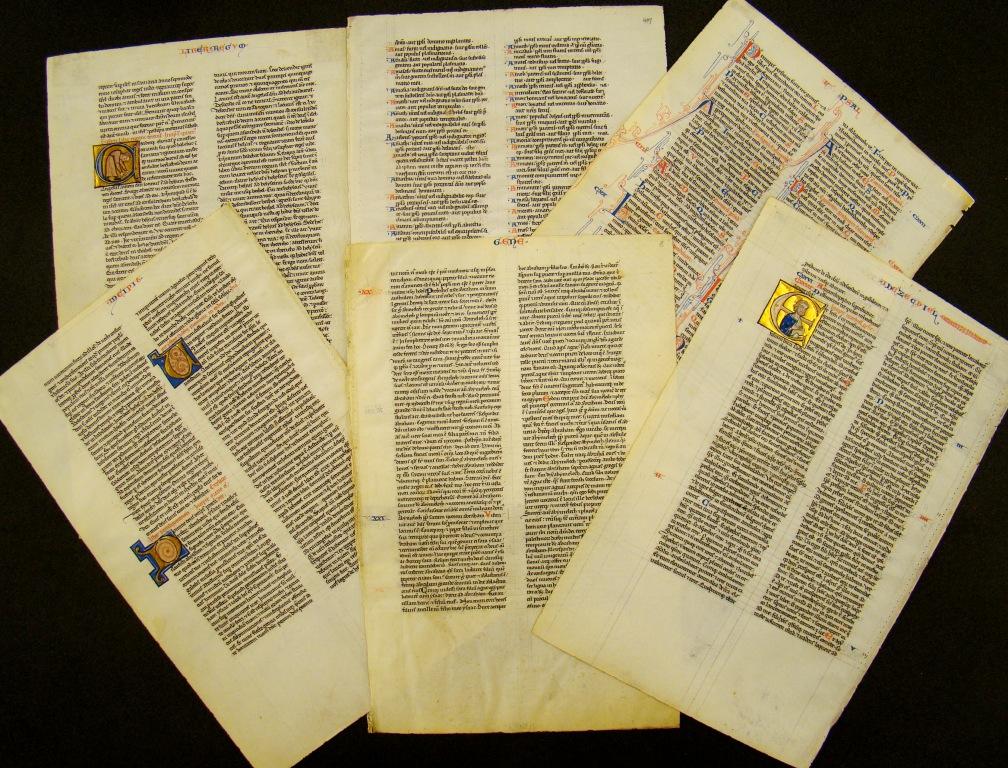 What role do you see Manuscriptlink playing in your field?

Now that we have digital technology, I think it’s incumbent upon all of us to try to do whatever we can to reconstruct every book that we find pieces of, simply because we do not know what story is going to emerge. Ohio State might have 12 leaves from something, and ours are pretty standard, but Institution X in Timbuktu has another three leaves, and those three leaves happen to have owner inscriptions on them. All of a sudden that book becomes so much more interesting, and we can start adding so much more historical context to it.

What about people outside of academia? What will they take from a visit to Manuscriptlink?

The site is going to be open access, so anyone in the world can use it. I’m hoping it will appeal to a lot of everyday users, not just specialists, and that it’s going to get them to be able to recognize stuff that they have in their own houses or that’s hanging in their grandmother’s parlor and bring those things to light. I’m happy if someone sitting down in Society Hill says, ‘That’s what one of these things is that’s hanging on the wall? I’m going to take this up to Penn and see if a curator knows anything about this.’ As a result, we discover another manuscript that no one’s known about before.

How did these book pages that you’re reuniting on Manuscriptlink get separated in the first place?

Book-breaking has existed as long as books have. The most innocuous, least offensive form happens simply as a process of use. Books fall apart. That’s happened for as long as they’ve been around.

And the intentional form?

It’s all about profit. One of the foremost experts in manuscript studies wrote an article about cutting up manuscripts for pleasure and profit. He talks about the never-ending profit that can be made from breaking a medieval book. Let’s say you buy a book for $10,000 and cut it in half. You could probably turn around and sell each half for $9,000. If you want to up the profit still more, you cut those halves in half. Now you get $7,000 a piece for each quarter. Now you have $28,000 instead of $10,000. You can keep breaking it down further and further, or even take cuttings, which are individual components of a single leaf. The modern book-breaking we’re seeing is entirely about profit. 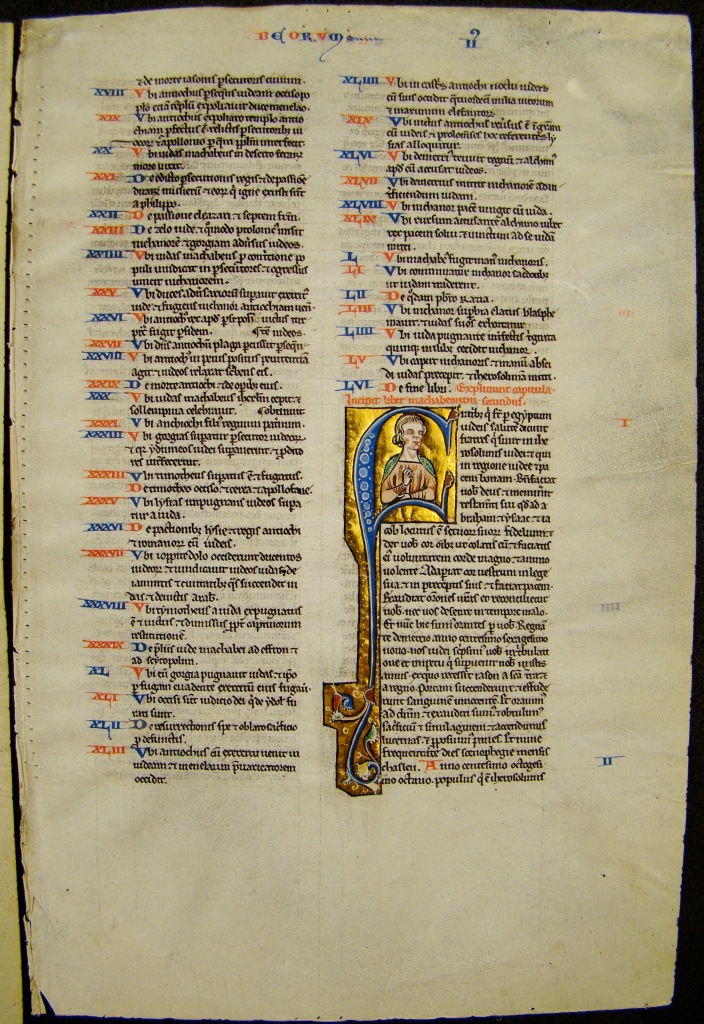 What about the bible you’re reconstructing? Was that broken for profit or from wear?

It was killed in September 1981 after being sold at auction for $23,100. If I were going to try and reconstruct it today, starting from leaf one and going through leaf 440, it would probably cost me $800,000 to rebuild.

It’s hard to believe that there’s no way to stop this from happening.

It happens every day. If you go onto eBay, there are dealers who are notorious across the curatorial profession and the antiquarian book dealer profession. Everyone knows who they are and what they do. They acquire manuscripts at auction and within months, if not days or weeks, these things are split up, put on eBay and sold off.

This puts people like me in a distinct bind, both professionally and ethically. I have no desire to support that kind of behavior, so when I know that one of these new dealers has done that, I don’t touch that stuff with a 10-foot pole. Having said that, if you know a manuscript they have is significant, you desperately want to buy up as many pieces as possible to preserve as much as you can. The huge problem is that there are virtually no libraries or private collectors out there who have the funds to be able to chase down every leaf.

Let’s end on a happier subject. Tell me about how you fell in love with medieval texts.

That’s entirely Penn. For my first few semesters, one of my unofficial nicknames with my friends was Man of Many Majors. I took calc, chemistry, econ, marine bio. I liked everything, but I kept gravitating back toward history and literature. Then I took a medieval literature class at the end of my sophomore year with David Boyd and everything just seemed to click. I fell in love with the course matter. Work wasn’t work.

I remember having my end-of-semester meeting with Dr. Boyd. It was so good that I walked all the way home on Locust Walk and don’t recall my feet touching the ground the entire time. I just thought, This is it. I’ve found my path.