Penn freshman Jon Guevara didn’t know anything about wrestling before he got to high school. He didn’t even realize it was a real sport. But he did know a little bit about fighting—or at least how to duck out of the way of the scuffles that plagued his rough-and-tumble middle school in the Oxford Circle section of Philadelphia.

Guevara is a small guy, 125 pounds dripping wet, and never got into trouble. But he liked to tell himself that he could beat up the brawlers. (Now he says, with a self-deprecating smile, “I think that was a lie.”) He was strong, after all. And he was a survivor. Guevara was the kind of kid who got good enough grades to get into one of the city’s elite public high schools, even though he had to help his father—an immigrant from El Salvador who speaks very little English—care for two younger siblings.

So it made a certain kind of sense that he went out for the wrestling team as a freshman at Central High School. What happened next, though, took him by complete surprise. He got hooked up with Beat The Streets Philadelphia, a nonprofit organization run mostly by Penn alumni that aims to improve the prospects of kids from at-risk and low-income neighborhoods through wrestling programs and other mentoring initiatives.

Suddenly, Guevara was getting help with his schoolwork. He got SAT prep. He had a sounding board for all of his challenges at home, which ranged from doing his dad’s taxes to going to PTA meetings for his siblings. (Following their parents’ nasty split, he says, the kids only see their mom occasionally.) More than anything, he received a level of wrestling instruction that helped him blossom from a freshman who won a single match to a team captain and two-time Philadelphia Public League champion as an upperclassman.

“I wasn’t used to having someone help me with everything I did,” he says today. “It showed me I can do anything I wanted—I just had to go for it.”

His mentors at Beat The Streets (BTS), primarily executive director Chris Hanlon C’04, helped Guevara arrange a meeting with Penn’s wrestling coaches. One thing led to another, and last fall he became not only the first BTS alum to enroll at Penn, but the first to make the Quakers’ esteemed varsity wrestling program.

He will complete his freshman year this May—something he never could have imagined just a few years ago. “That is a milestone for the organization,” says BTS board chairman Clint Matter C’97 W’97, who made his mark as a wrestler during his Quaker days.

One of BTS’s big goals is to help kids get into any college, regardless of whether they plan to continue to wrestle. Guevara’s Penn acceptance carried special meaning. The University, after all, has become something of a home base for the program. It stages tournaments at the Palestra prior to collegiate wrestling meets, and counts a number of current Penn students as mentors to program participants. Apart from Hanlon, who runs day-to-day operations, Penn alumni include Canaan Bethea C’15, who is an assistant director of the mentoring program, and BTS board members Brett Matter W’00 and Brandon Slay W’98, both former Quaker wrestlers.

According to Clint Matter, the organization has a $1.1 million budget, which funds coaches’ salaries, equipment, insurance, and travel. Board members contribute a significant amount, and raise money from donors. The program is free for participants. Clint calls it “a lot of fun” to see children who come from difficult circumstances “smile just like any other child” when they get on the mat.

“As you reflect upon your own career,” he said while watching a BTS event at the Palestra before Penn’s January meet with Lehigh, “and you recognize what the sport of wrestling has meant to you as an individual, as a husband, as a father—being able to share those same lessons with other athletes is humbling. It’s humbling, exciting, and inspiring.”

Hanlon recalls looking up to the Matter brothers when he was a freshman, but confesses that he didn’t match their level of talent or drive. He ended up quitting the team and taking a year off school. But he started to miss the sport, and was thrilled when then-wrestling coach Roger Reina C’84 WEv’05 (now a BTS board member and Penn’s senior associate athletic director of external affairs) gave him an opportunity to be a manager and run some of his camps.

Not only did that help Hanlon find his way again, it also reignited his passion for the sport—and for Penn. So he was all too happy to volunteer his time when he heard that the Matter brothers and others were trying to get Beat the Streets off the ground in 2009. About a year later, he was hired full-time. Since then, he says the organization has gone from supporting two programs and about 30 kids, to 22 programs and close to 1,200 kids. BTS has three full-time employees, and funds the salaries of 60 part-time coaches.

“But I’m just a piece of the puzzle,” says the executive director. “There were coaches and board members who from the very beginning were very clear: ‘We want to make this happen. We have the resources and we want to help kids.’ And they don’t ever put their name out there.”

Hanlon says scaling up in the Philadelphia region presented some challenges. One was creating new hubs at schools where wrestling hadn’t been established as a sport. Another was that it proved hard to get Penn students to volunteer as mentors in distant corners of the city, so a centralized mentoring center was established in University City. But BTS never strayed from its core tenet of pairing youth wrestling instruction with academic tutoring, because, as Hanlon says, “Some of the kids eat it up and get really good at the sport. But the reality is we don’t focus as much on the actual wins and losses.”

He says that the most rewarding part of his job is watching kids visit a college campus for the first time and realizing it is a possibility for them. And although the organization is still young, he sometimes gets thank-you notes from young men who have passed through the program. Every now and then, he says, Guevara shoots him a random text message of gratitude.

“He’s always been so supportive,” Guevara says of Hanlon. “I feel like people are scared to tell people their true feelings. But I can always tell him my true feelings.”

Although Guevara, who joined BTS’s Port Richmond program as a high-school sophomore and was mentored by then-Penn wrestler Andrew Lenzi W’15, turned into a better wrestler than most, his future in the sport is now uncertain. He had to stop wrestling midway through this past season after getting diagnosed with a heart arrhythmia, adding yet another complication to his life. But even if he can no longer compete, he wants to remain with the team as a manager. And he’s still soaking up all Penn has to offer away from the mat, claiming a 3.5 GPA in his first semester as a double major in the Health & Societies and sociology programs. (“This semester I want to get all As,” he says.) He says his younger sister now wants to come to Penn, to study engineering, and adds that his father, who knew little about American colleges beforehand, proudly wears a “Penn Dad” shirt to his custodial job.

Once he graduates, Guevara says he plans to pay it forward. He’d like to help other kids who grow up poor get to college by creating a similar kind of program, perhaps in his father’s native El Salvador. He doesn’t have it all figured out yet, though. For now, he’s just excited for his next three years at a university he never thought he’d be able to attend.

“I can’t wait to see what’s in my future,” the freshman says, before rising and walking through an open door. 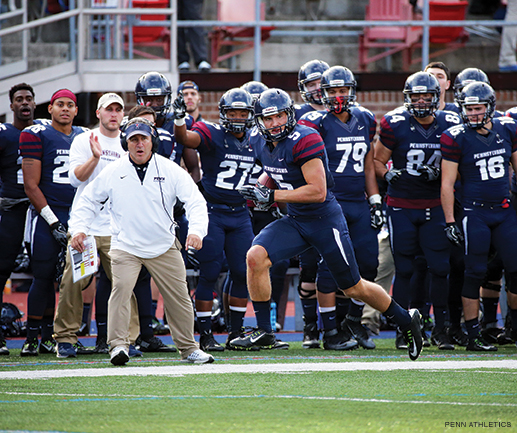