Health and the City 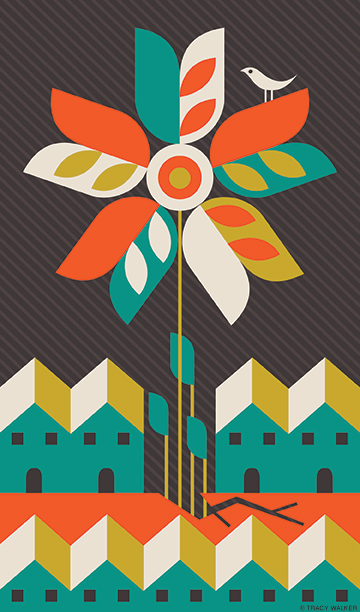 Can urban designers and municipalities use the kind of evidence-based studies preferred by epidemiologists to craft less violent, more sustainable, and healthier communities? At a recent panel sponsored by the Penn Institute for Urban Research (IUR), “Shaping the Urban Health and Environmental Landscape,” speakers from a variety of disciplines—though none of them city planners—reported on data-driven attempts to demonstrate that place-based initiatives such as landscaping projects and new street designs can create safer and healthier environments. The goal of such changes is to encourage residents to come outdoors, where the air is (presumably) fresh and clean, by providing improved opportunities for walking, biking, and other activity.

In an overview, Rupal Sanghvi, a principal investigator at the Public Health Institute and a fellow at the Design Trust for Public Space, explained that performance metrics and data analysis are commonly used to measure outcomes in public health interventions. But, she added, they’re not often favored by planners, who tend to emphasize sensitivity to a place’s physical context rather than scaling up and replicating any particular project. To bridge the gap, in 2009 she founded New York-based HealthxDesign, which “explores and communicates the role of design to improve health and related social justice outcomes.”

In an era when “lifestyle diseases” like Type 2 diabetes, cardiovascular disease, and chronic obstructive pulmonary disease are leading causes of premature death and major drivers of medical expenditures across much of the world, Sanghvi wondered if the incidence of these often preventable ailments might decrease if they were “addressed through collaborations with the shapers of the built environment” who influence how we live, play, and work.

Sanghvi discussed a recent project in the South Bronx steered by HealthxDesign and a host of city agencies, community partners, and private entities. It created a master plan for The Haven—named after the neighborhood of Mott Haven, which is part of the poorest congressional district in the country—that envisions increased waterfront access and green spaces thanks to a new network of pedestrian paths, bike lanes, tree-lined streetscapes, and parks. The hope is that by refreshing now-vacant lots and grimy underpasses, and making streets easier to navigate with updated lighting and traffic-calming measures, residents will enjoy better connected and safer neighborhoods.

Can such improvements really move the needle for a population where 71 percent of residents are obese? “Just as in any other public health intervention, this isn’t automatic,” said Sanghvi. But where possible the design’s elements draw from data, not just faith. “That lighting increases people’s presence is evidence-based,” she said. “We believe credibly that these results make sense based on the site and context.”

When it comes to one of Sanghvi’s goals—scalability and repetition—the Pennsylvania Horticultural Society’s LandCare program is a model, said another speaker, Bob Grossman, senior director of landscape management at PHS. Since 2004, the LandCare program has “cleaned and greened” some 12,000 blighted corners and litter-strewn vacant lots. Its formula—installing fencing and grass; mowing and maintaining the new green spaces—“offers big impact in a short time,” Grossman said.

What you get isn’t “Rittenhouse Square, of course,” he observed, but he posited that simple amenities like trees and tidy borders that discourage trash dumping have the power to turn vaguely dangerous eyesores into spaces where people can congregate socially. He also noted that the panel’s moderator, IUR director Susan Wachter, the Albert Sussman Professor of Real Estate at Wharton, has conducted research on the program’s positive impact on real estate values and overall neighborhood vitality [“Park of a Thousand Pieces, July|Aug 2011].

Charles Branas, a professor of epidemiology and biostatistics at the Perelman School of Medicine, offered a thought-provoking look at attempts to correct what he referred to as “uncontrolled demolition”: neighborhood renewal efforts that were undertaken with no “real thought about what to do after.”

He presented a slide depicting the old Lucky Seven Tavern, once characterized by Philadelphia’s iconic down-on-his-luck prize fighter, Rocky Balboa, as being located in a neighborhood with “creeps on every other block.” But, said Branas, such bars can actually be “safe havens” in rough areas. The tavern was torn down a few years ago, and its lot has been cleaned and greened. But that leaves an open question: “How do we know if the changes at Lucky Seven made things better, or worse, for the neighborhood?” Branas asked.

It’s a question that he and his colleagues hope to answer with two ongoing studies in Philadelphia. One compares three groups of randomly selected lots: some of which are receiving the full LandCare “clean and green” treatment, some of which are simply being maintained but not otherwise improved, and some that receive no attention. A second study is assessing the outcomes of fixing up abandoned buildings. It splits about 300 buildings into three groups: some will receive façade renovations, complete with new doors and windows; some will simply receive façade maintenance; and a control group will feature no intervention.

Both of these studies were preceded by “quasi-experiments” that did not feature random assignments, and Branas said the results included significant reductions in violent crimes around and near the greened lots and renovated buildings, as well as reductions in stress levels, improvements in exercise, and reductions in sedentary behavior among those who lived in the vicinity.

Branas observed that part of the value of conducting such studies lies “not only in determining what works, but [because] policymakers and people who allocate resources recognize them.” He displayed a passage from the federal Office of Management and Budget encouraging agencies “to allocate resources to programs and practices backed by strong evidence … by utilizing randomized controlled trials or careful quasi-experimental techniques … to distinguish strong from weak evidence and measure cost-effectiveness.”

There’s a “dearth of high-level, evidence-based analysis,” added Branas, on the impact that changes to the urban environment can make upon concerns like housing and blight and crime. “Just as in medical care, it’s acceptable that multiple random trials” be undertaken, he continued. “The lesson for planners is to not just study where you made changes, but to study where you did not. That’s equally, if not more, important.”