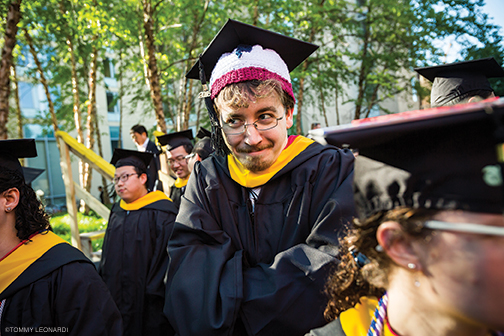 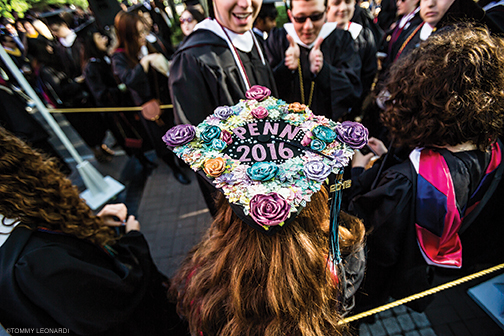 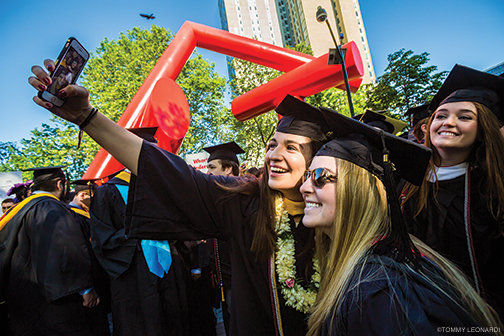 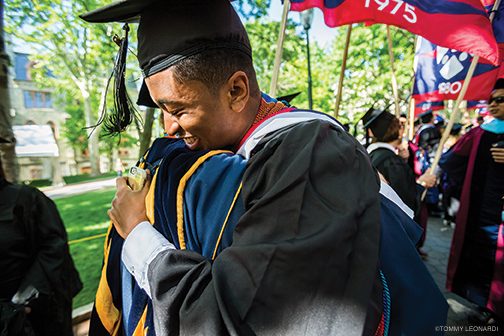 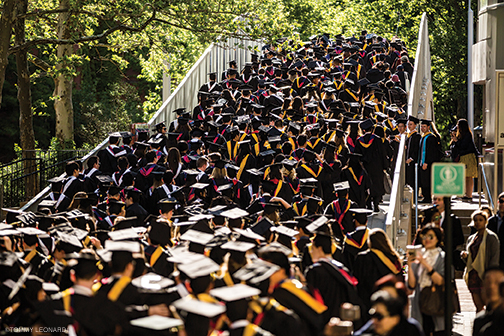 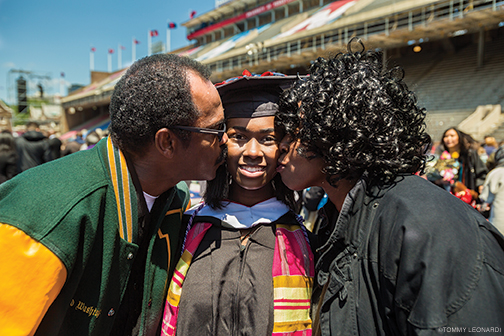 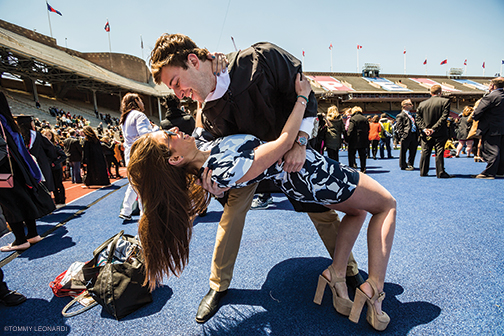 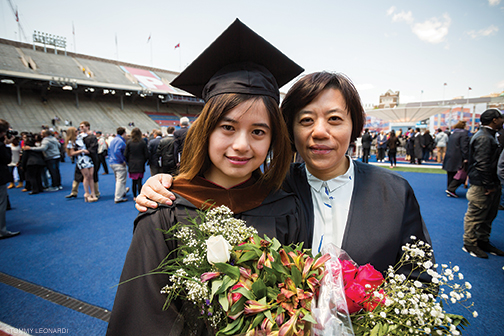 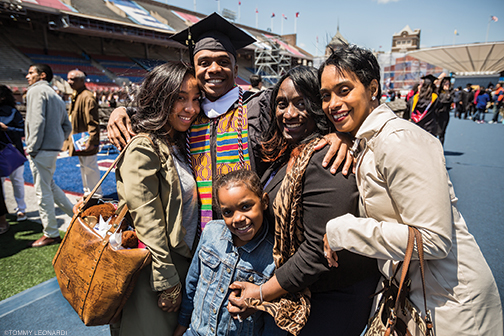 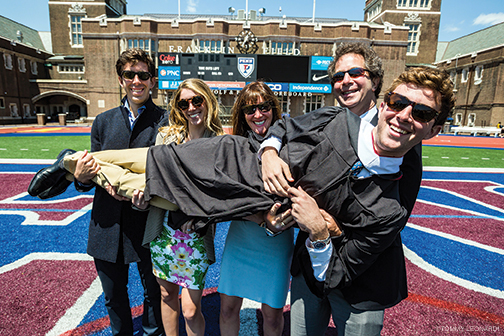 It was a day for sunglasses and mittens. As the Class of 2016 assembled for the University’s 260th Commencement, the flags above Franklin Field rippled in a skin-chapping wind that produced a spectacle somewhat unusual for a rite of spring: a smattering of spectators huddling beneath Red Cross blankets. Yet the overnight cold snap had swept away most of the clouds, and brilliant sunshine streamed down as Penn President Amy Gutmann paused her opening remarks to urge the graduates to sidle up to a neighbor and snap a selfie.

“During your time at Penn, you have learned so much and you have grown so much. Not only that, you’ve been able to capture it all on Instagram to share with your friends,” she said with a smile.

“Just think of what you’ve gained,” she then quipped. “You have friends who can’t eat a bite of food without sending a picture to you for your approval.”

Wisecracks aside, Gutmann made friendship the theme of her address. Reflecting on her own seemingly unlikely friendship with a young man from quite a different background than hers—which blossomed into a long and satisfying marriage—Gutmann emphasized the importance of forging personal connections across social divides. She mused about Ruth Bader Ginsburg and the late Antonin Scalia—two Supreme Court Justices with radically different jurisprudential records who nevertheless nurtured a deep friendship. She told a story about Ella Fitzgerald, who, before her full-fledged stardom as a jazz singer, was denied a booking at Hollywood’s premier nightclub, the Mocambo. Marilyn Monroe, an admirer, made the club’s publicity-hungry owner an offer he couldn’t refuse: Book Ella, and Monroe would reserve a front-row table at every show. It proved to be a turning point in the singer’s career.

“Friendships open hearts, and friendships change minds—not only for each other, but for all of us,” Gutmann said. “Like Ella and Marilyn, friends who cross divides advance the well-being of our society. We are the best when we embrace these special friendships that cross religions, races, all kinds of identities and ideologies. And as it so happens, these are the very kinds of friendships you have been able to forge in your years at Penn.”

Friendships also featured in the remarks of Commencement speaker Lin-Manuel Miranda, who reflected more deeply on the stories we tell about them, and about ourselves.

If American graduation season doubles as an unofficial contest for the most famous, accomplished, or clever keynote speaker, Penn’s choice surely nabbed a less-discussed prize: most entertaining introduction. Provost Vincent Price welcomed the Pulitzer Prize-winning playwright to the podium with a four-minute recitation of laurels styled after the rhyming hip-hop cadences of Miranda’s Broadway hit Hamilton—“a man with a quill,” in Price’s memorable phrasing, “whose grill is still on the ten-dollar bill.”

“He wrote and directed, and unaffected by rejection, after four years elected to follow his dream,” Price said of Miranda. “To write and create stories to demonstrate both love and hate: people who tried to advocate for those society dominates. And how our faith can fluctuate, forcing us to recalibrate the people who make this country great.”

Miranda picked up where “MC Provost”—as he dubbed Price with evident delight—left off, imploring the Class of 2016 to be aware of the power of stories to shape our lives, and to recognize that storytelling is ultimately an act of pruning the truth, not representing it in its entirety.

“Every story you choose to tell,” he said, “by necessity omits others from the larger narrative. One could write five totally different musicals from Hamilton’s eventful, singular American life … For every detail I chose to dramatize, there are 10 I left out. I include King George at the expense of Ben Franklin. I dramatize Angelica Schuyler’s intelligence and heart at the expense of Benedict Arnold’s betrayal. James Madison and Hamilton were friends, and political allies—but their personal and political fallout falls right on our act break, during intermission.

“This act of choosing—the stories we tell versus the ones we leave out—will reverberate across the rest of your life,” he went on. “Don’t believe me? Think about how you celebrated this senior week, and contrast that with the version you shared with the parents and grandparents sitting behind you.”

A knowing laugh rippled through his audience.

“Your stories are essential,” Miranda continued, implying that so too is the choice of stories they choose to honor. “Don’t believe me? In a year when politicians traffic in anti-immigrant rhetoric, there is also a Broadway musical reminding us that a broke, orphan immigrant from the West Indies built our financial system. A story that reminds us that since the beginning of the great unfinished symphony that is our American experiment, time and time again immigrants get the job done.

“You are about to enter the most uncertain and thrilling period of your lives,” Miranda concluded. “The stories you are about to live are the ones you will be telling your children, and grandchildren, and therapists. They are the temp gigs and internships before you find your passion. They are the cities you live in before an opportunity of a lifetime pops up halfway across the world. They are the relationships in which you hang on for dear life … the times you say no to the good opportunities so you can say yes to the best opportunities … They are the stories in which you figure out who you are.”