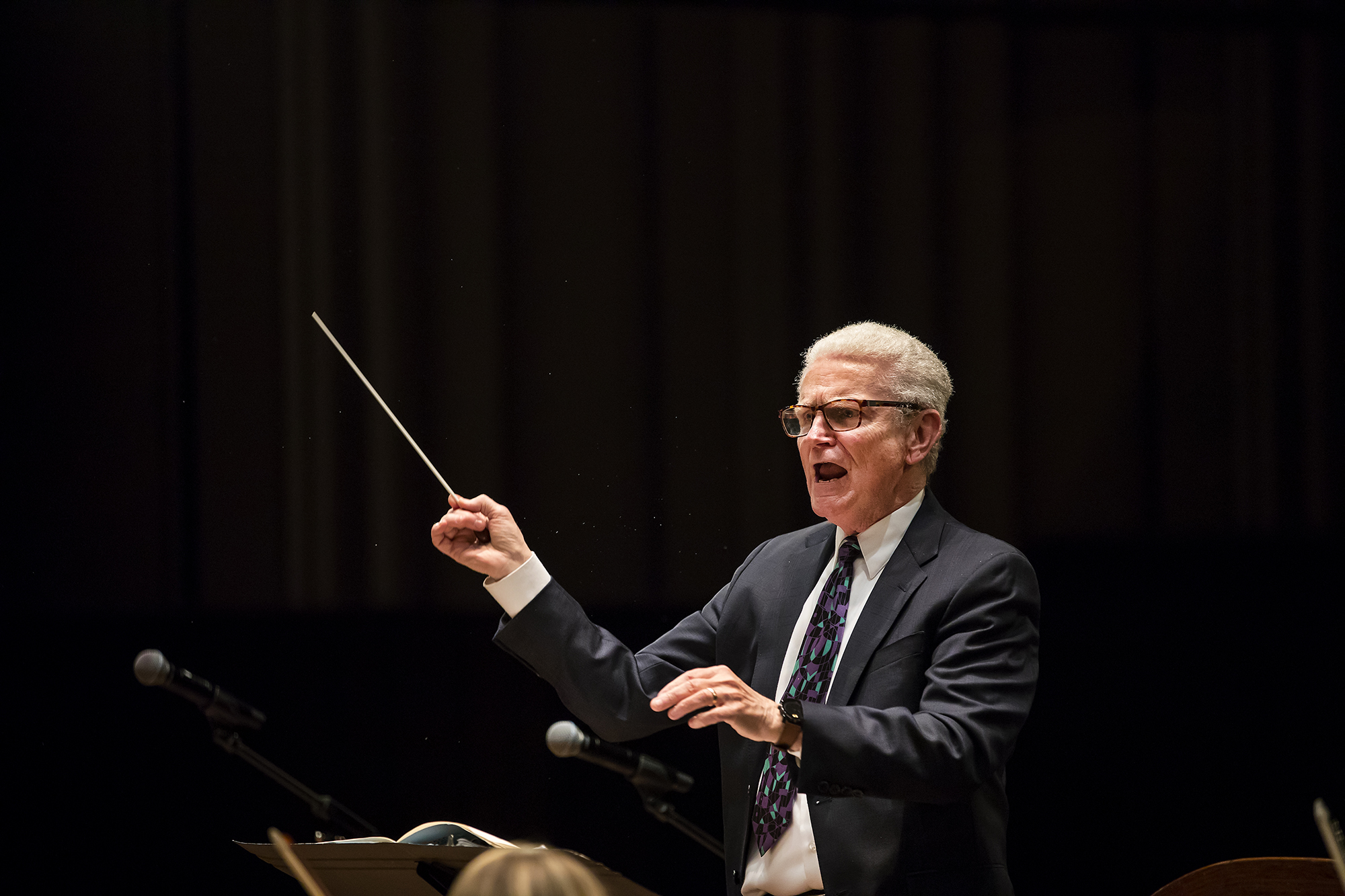 This Friday, after 45 years and 270 concerts at Penn, William Parberry Gr’80 will conduct his last performance on campus.

He came to Penn as a graduate student in musicology in the early 1970s and has since become the leader of three music department singing groups: the University Choral Society, the University Choir, and Ancient Voices.

The Choral Society concert on April 20 will mark Parberry’s last appearance on a Penn stage. Under his baton, they’ll perform parts two and three of Handel’s “Messiah”—and its closing “amen” chorus will double as a finale for Parberry, who is retiring.

He spoke with Gazette contributor Molly Petrilla C’06 about his decades at the University, the time that one of his choirs sang with Barbra Streisand, and why he chose “Messiah” as his farewell to Penn.

You direct the University Choir, which sang backup for Barbra Streisand at Madison Square Garden in 2000. How’d that come about and what was it like?

It was quite something. Barbra Streisand’s music director contacted me to submit a CD to audition as her backup choir for what, at the time, was her retirement concert, and we were selected. They heard about us because we had been on tour all up and down the East Coast with Michael Crawford, the lead in Phantom of the Opera.

I was most impressed with [Streisand] in rehearsal. She was very good at hearing what was not quite right in an arrangement and then verbalizing that to the conductor. She wouldn’t know all the details of how to rework the arrangement, but she had a very good ear for hearing what would or wouldn’t work.

All the celebrities in the world were at this concert, and I was lined up with many of them to congratulate [Streisand] at the end. Brooke Shields was right in front of me and Regis Philbin was right behind me. It really was quite something.

What else stands out from your years at Penn?

There are two specific performances. One was the Mozart Requiem, which we did at the Philadelphia Episcopal Cathedral. We performed it in a blizzard right after the movie Amadeus came out, which is the story of Mozart’s life. In spite of the fact that there was this huge blizzard, the church was absolutely mobbed. People ended up sitting in the aisles.

The other was [Bach’s] B-Minor Mass. It’s long and difficult and expensive to put on because you have to hire [instrumentalists]. It was beyond what the music department would budget for one concert by the University Choir. A dear friend of mine who was in the choir—and who was also my best friend in high school—said, ‘Look, Bill. I don’t care what it costs. I will cover the expense of this concert. We’ll do it no matter what.’ It ended up being about $10,000 for this one concert, and he covered everything.

Your ensembles at Penn have always focused exclusively on classical music. What is it about classical that keeps you hooked?

I can’t think of anything that moves me more than classical music, and I think that’s probably true for most of the people who sing in these ensembles. When you start in the beginning of the semester, it’s just a lot of notes, many of which people are singing incorrectly. Then week by week, it improves, and by the time you get to the performance, you have this great work of art. And it sounds the way it should sound—as the composer would have wanted to hear it at its best—and it should move the audience as much as it does me and the singers themselves.

Unlike most performance groups on campus, your ensembles have been open to the entire Penn community, not just students. What’s the rationale behind that, and how does it benefit the groups?

If you confine a group to one type of singer—for instance, only undergraduate students—then it cannot sing certain repertoire because it’s not going to be skilled enough. And you may also be in danger of not being able to put together a group that is well-balanced.

I found that to be the case when I took over these ensembles early on. I went to graduate students, to faculty members, members of the staff, and eventually members of the community in order to get a balanced ensemble. And that has worked not only for the Choir, but for the Choral Society and Ancient Voices.

As Nancy Hornberger—a faculty member who has sung with me for years—said, these groups should exist for the whole University community. For everybody who loves music and has even the remotest connection to the University, this is a wonderful artistic medium that they can all participate in. And it shouldn’t be, I don’t think, exclusive to the undergraduates at the University.

Why did you choose Handel’s “Messiah” for your final concert at Penn?

Because of the quality of the music. Almost every chorus and every aria is absolutely beautiful, and Handel’s setting of the text is so knowledgeable. It really is a masterpiece.

There’s another reason, too. I was trying to think of something that would be a great work to conduct for the last time, and the final “amen” of the “Messiah” is like no other finale in history. It’s an extended amen that is beautifully crafted with this great climax at the end—a majestic moment. I thought it would be a great “amen” to my career as well as to this masterpiece that Handel composed.

What do you suspect you’ll miss most about your job?

I think both the performances and the rehearsals. In rehearsal, it’s working with the group and seeing the music develop as they learn it and get excited about it. Then in the performance, when you see them so involved emotionally in the expression of the music and getting all the details exactly right, it’s just such a rewarding experience, and I won’t have that anymore.

What I won’t miss is the work involved in putting it all together. Even over the summer, I’m very busy researching music. The preparation is very difficult. It takes a lot of time—all the research and getting it right, the details that you want, and planning how you’re going to get all this out of the singers.

Any advice for the next person who will lead these groups?

The best advice I could give is to be flexible with the students or any of the members who join the group. There are going to be times that they’re going to ask to miss a rehearsal or be late to a rehearsal. I think a lot of young conductors in particular are somewhat defensive when they begin conducting. They feel that these requests are a way to take advantage of them as a youthful conductor, and so they react the wrong way. An experienced conductor knows how to make people really enjoy being in a group and look forward to every rehearsal.

What’s next for you personally?

This will be the first summer that I won’t have to immediately start planning repertoire for the fall semester. I think my wife and I will do some traveling and spend more time with our wonderful family.

Parberry’s final concert with the University Choral Society will be on Friday, April 20, at 8 p.m. in Irvine Auditorium. There is also a fund forming in his honor. It will support undergraduate choral scholars at Penn.