New Penn Alumni President Michael L. Barrett EAS’89 says that the “signature moment” that led to his reconnection with Penn after graduation happened about as far from West Philadelphia as you can get: Australia, one stop in a peripatetic career that has taken the mechanical engineer turned financial executive around the world.

“What became our extended family were people from Penn—alums who lived in Sydney, who lived in Melbourne,” he says. “I didn’t really understand it at the time. It was an alumni club, and we got together, and we would dress up in our Penn gear.” Regardless of the time difference, the group would watch Penn football games at “some ridiculous hour,” he recalls.

Barrett found the same sense of community when work later took him and his family to Beijing, Shanghai, and Hong Kong. “I always felt comfortable where I was because I knew that I had like-minded people” ready to share memories such as walking on Locust Walk, throwing toast at Penn football games, and enjoying Spring Fling. These connections helped Barrett “adjust to being in different cultures, different languages, different countries.” Over more than a decade living overseas, he adds, “it became a way for us to always feel like we had somebody” to connect with wherever they found themselves.

Once settled back in the US, Barrett resolved to become more engaged with Penn to “give back,” he says. Currently the cochair of the James Brister Society [“Alumni Profiles,” Nov|Dec 2020], which works to promote a more diverse community and leadership at Penn, he’s also been a University trustee since 2020—serving on the budget and finance committee; the local, national, and global engagement committee; and the ad hoc committee on diversity—as well as an active volunteer with Penn Engineering and Penn Athletics, having played football as a student.

Barrett’s term as Penn Alumni president began in January 2023. He succeeded Ann Reese CW’74, currently vice chair of the trustees, whom he calls a “wonderful mentor to me not only in this role but on the board of trustees,” and a “real champion” for diversity at Penn. As the face of Penn Alumni when the pandemic hit in 2020, Reese “was able to get our alums, in an environment where people were not coming back to campus, excited about the brand, excited about where the University’s going, and continuing to make sure they stayed engaged” (see next page).

Hoopes Wampler GrEd’13, associate vice president of alumni relations, calls Barrett “the exact right person” to be coming into the role at this time. “He is supremely dedicated to Penn and will work to make sure all Penn alumni can engage in the life of the University in an inclusive and equitable way,” he says. “Michael will make Penn better, and we are all looking forward to it.”

Barrett grew up on Long Island, New York. His parents, who had emigrated from the West Indies, placed a big emphasis on education, and his father, an electrical engineer, counseled that he follow a similar path because “you can’t go wrong” with STEM. Barrett, who “played a lot of sports” and earned top grades in high school, already had his eye on the Ivy League and settled on Penn after visiting Philadelphia, drawn by the urban environment and events like Spring Fling and the Penn Relays.

As a mechanical engineering major, Barrett says he was active in engineering clubs and with the Big Brothers program in addition to varsity athletics. “I really had a good time” at Penn, he recalls. “Even to this day, I will meet people that are alums from around the same time I was here, and we just reconnect.”

After graduation, he joined General Electric in a management training program. His first assignment was at a manufacturing plant near Montgomery, Alabama—an experience that taught him a lot about management and navigating different cultures, he says. But he was more drawn to the finance side of business. He went on to earn an MBA at the University of Michigan and switched over to GE Capital, which is where his international travels began. (Stockholm and London were other stops.) He’s currently senior vice president and senior managing director with Wells Fargo.

Barrett is also one half of a Penn couple, married to Traci Green W’91, and a Penn parent. He credits daughters Ashley E. Barrett C’20 and Whitney M. Barrett C’21 with broadening his horizons beyond his own familiarity with athletics and engineering to include “hidden gems” like Kelly Writers House.

Barrett is taking on the Penn Alumni presidency at a time of transition, with new leadership in College Hall and the University more fully emerging from the pandemic. He says he’s looking forward to working with Penn President Liz Magill and sees the next period as an opportunity for Penn Alumni to incorporate the lessons learned about engaging alumni virtually—especially those in far-flung locations—while also leaning back into the joys of in-person events like last spring’s record-setting Alumni Weekend [“Alumni Weekend 2022,” Jul|Aug 2022] and the recent Homecoming celebration [“Homecoming 2022,” this issue].

Given his own experience, he’s especially sensitive to making sure that international alumni feel connected to Penn, he says. Another continuing focus will be on diversity, equity, and inclusion, which was embraced by Reese during her tenure and is embodied by Barrett, the first Black Penn Alumni president. From his days as a student member of the Association of Black Engineers, Barrett says he’s had a passionate interest in promoting a more diverse community at Penn.

When he was asked about serving as Penn Alumni president, he recalls, “I looked in the record books, and I didn’t see anybody like me.” That absence “was telling—but it was also an opportunity, and one that I don’t take on lightly,” he adds. “The time was right, and I think this is a testament to the leadership of the University and the alumni base.” Lots of people congratulating him have added that “it’s about time,” he says, and he stresses a commonality among initiatives to foster diversity and inclusion and bring new voices to the table.

Efforts like the recently formed Penn Leadership Q, which seeks to increase the presence of the LGBTQ+ community in leadership roles, “remind me of what we were doing with the James Brister Society,” he says. “It was all about, ‘How do we get the environment to facilitate our experiences here, how do we feel like we’re welcome, how do we feel like we have the opportunity to make a difference?’ And, you know, now it should be just, ‘This is who we are, this is what we are, this is what we do.’”

Whether they’re as far away as Sydney or as close as West Philadelphia, Barrett urges all alumni to get involved with the University in some fashion, as their resources and time allow. “Anything you can do to give back is time well spent,” he says. “There’s a personal enjoyment that you’ll get from it, and then I also believe that the students really enjoy the opportunity to communicate with alums and hear about their experiences.”

“As the University continues its upward trajectory, I think it creates more opportunities for alums to get involved. With President Magill and the leadership coming in, there’s fresh thinking, new ideas,” Barrett says. “I look at all the work that President Gutmann did in her leadership—fantastic run—and now I look at what President Magill is going to do, and I get excited about it, because she’ll bring a different experience.”

New perspectives and continuous learning will create the opportunities to further strengthen interdisciplinary scholarship and collaboration and fuel all sorts of advances in undergraduate and professional education alike, he says. “To be around that in this environment at this time, I think, again, it’s an opportunity that you relish—because you can be involved and help drive and make decisions and be part of really creating a new history.” —JP 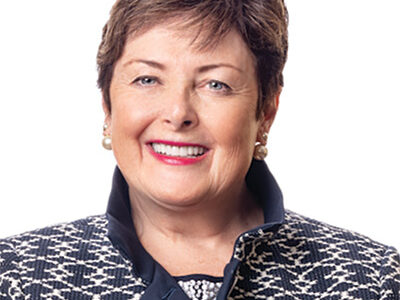