Across campus, the portraits on the walls of Penn’s buildings are becoming more diverse.

For decades, anyone walking up and down the stately main stairwell in Leidy Laboratories would have encountered gilt-framed portraits of, well, old, white men. Some of those faces had no connection to Penn’s biology department, which is housed there—or even to Penn itself. One, a German ecologist, likely never set foot on American soil. A couple of others were so obscure even Google searches drew blanks.

That’s all changed thanks in large part to Joshua Darfler LPS’22, the biology department manager whose quest to find the answer to an offhand question ended up becoming a two-plus-year passion project. Fourteen new framed portraits now loom large on the stairwell’s walls—including those of Emily Lovira Gregory, the first woman to hold an instructor position (1888–1889) at Penn; Jane Hinton V’49, one of the first two Black women to earn a doctorate in veterinary medicine at Penn who helped develop a commonly used microbiological medium; Shinya Inoué, a Japanese American former Penn professor who’s considered the founder of the field of cytoskeleton dynamics; and Roger Arliner Young Gr’40, the first African American woman to earn a doctorate in zoology in the country.

The redesigned gallery reflects the diversity of the faculty and former students who once traveled those very corridors. “We’re trying to create a space that feels a little bit more encouraging, a little more representative of what we see the future to be,” says Darfler, who chaired the art committee formed to tackle the project. In April, some of the living members featured in the gallery were honored at the department’s Telfer Lecture.

Similar changes to Penn’s iconography are underway across campus, where old images are coming down in favor of ones that better showcase the richness of Penn’s history while amplifying the University’s mission of diversity, equity, and inclusion.

The Perelman School of Medicine has enlarged a portrait display in Stemmler Hall honoring the many contributions of physician Helen Octavia Dickens, who was the first African American female faculty member in Penn’s obstetrics and gynecology department. Meanwhile, the Carey Law School has highlighted more diverse portraiture, including paintings of Sadie Tanner Mossell Alexander Ed1918 G1919 Gr1921 L’27 Hon’74—the first Black woman to graduate from Penn Law, the first Black woman in the US to earn a PhD in economics, and the first Black woman to practice law in Pennsylvania despite facing racism and sexism [“Old Penn,” May|Jun 2021].

According to University Curator Lynn Marsden-Atlass, the 8,000 or so pieces in Penn’s art collection include 1,558 portraits—about 90 percent of which were “painted by white males of white males,” she says. “That’s the narrative that needs to be changed.

“We have wonderful diversity of students from all over the world,” continues Marsden-Atlass, who also serves as executive director of the Arthur Ross Gallery. “We want people to understand and feel like they belong. One of the many ways you belong and feel included is to see portraits of people who look like you.” Since 2020, about 50 portraits have been returned to the Office of the Curator, where they are stored offsite, she adds.

For Junhyong Kim, Patricia M. Williams Term Professor and chair of Penn’s biology department, the new gallery is a small but important part of a larger goal. “In the long run, Penn has to reflect local diversity,” says Kim, who has served on an ad hoc committee to hire more faculty of color in biomedical sciences and hopes to raise money to add new artwork to Leidy’s main lecture hall. “Artwork and images are the events that really punctuate our lives,” he adds.

The Leidy portrait gallery project began in the fall of 2019, when biology professor Mecky Pohlschröder wandered into Darfler’s office. “I remember her asking this nonchalant question, ‘Who are these people and why do we have a bunch of old, white men on our walls?’” Darfler says. “I said, ‘I have no idea. I’m assuming they are important figures from our department.’”

Darfler soon realized how few of the portraits had any connection to the department or University and, working with the curator’s office, became determined to build the gallery anew. In March 2020, a nine-member art committee of Penn Biology faculty, administrators, and graduate students was established to winnow a list of nominations for new portraits. “The goal was to have a diverse group of people, using that word on multiple levels simultaneously,” he says. “What was their affiliation? When were they in the department? What were they studying? And race and gender.”

Meanwhile, amid Black Lives Matter protests in the wake of George Floyd’s murder, a group of faculty and staff that included Kim called for institutional financial support to diversify the University’s portraiture in an open letter that more than 430 members of the Penn community signed. The motivation, in part, came from comments from students and even faculty recruits about the campus iconography appearing inconsistent with the school’s commitment to diversity, equity, and inclusion. “Many spaces at Penn reflect its history but do not reflect our core values of diversity and inclusion,” the letter stated, “nor do they accurately reflect the student, staff, and faculty bodies that comprise the Penn of today, or those we envision to comprise the Penn of tomorrow.”

Soon after, a Campus Iconography Group was formed  to examine what’s depicted around campus, starting with sculptures and statues [“Gazetteer,” Sep|Oct 2020]. The group issued a report that included recommended standards for removal as well as criteria for additions, with a focus on more inclusive and diverse images—the latter putting Penn at the forefront of a national discussion, the group’s leaders say.

“Images matter,” says Joann Mitchell, senior vice president for institutional affairs and chief diversity officer who cochairs the group with Frederick “Fritz” Steiner GRP’77 GFA’86 Gr’86, dean of the Weitzman School of Design. “To the extent that people see images that do not reflect the vision, missions, and values of the institution, it creates a sort of disconnect. To the extent we have not been as fulsome about sharing all of the important people who have made contributions in making Penn what it is and also thinking about our aspirations, signals there is work to be done.”

Although Leidy portrait gallery honoree Helen Giles-Gee CW’72 GEd’73 Gr’83—who studied psychobiology, science education, and research techniques at Penn and served as the 22nd president of the University of the Sciences—believes that “there are additional issues that the University should tackle,” including Penn’s early ties to slavery [“Gazetteer,” Nov|Dec 2018], she welcomes the new pictures that have been up since December (and are also displayed digitally at bio.upenn.edu/pennbio-gallery). She was especially moved to be included in the gallery next to her adviser Ingrid Waldron, professor emeritus of biology and the first woman to receive tenure in the department.

“I thought the gallery wall celebrated well the chapters of Penn history that had been unrecognized,” Giles-Gee says. “I think of the others who came before me.” 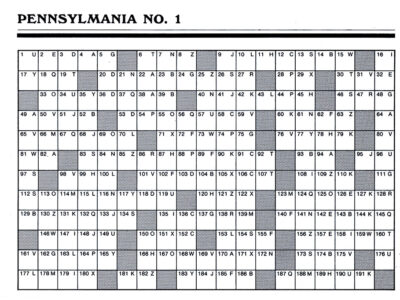