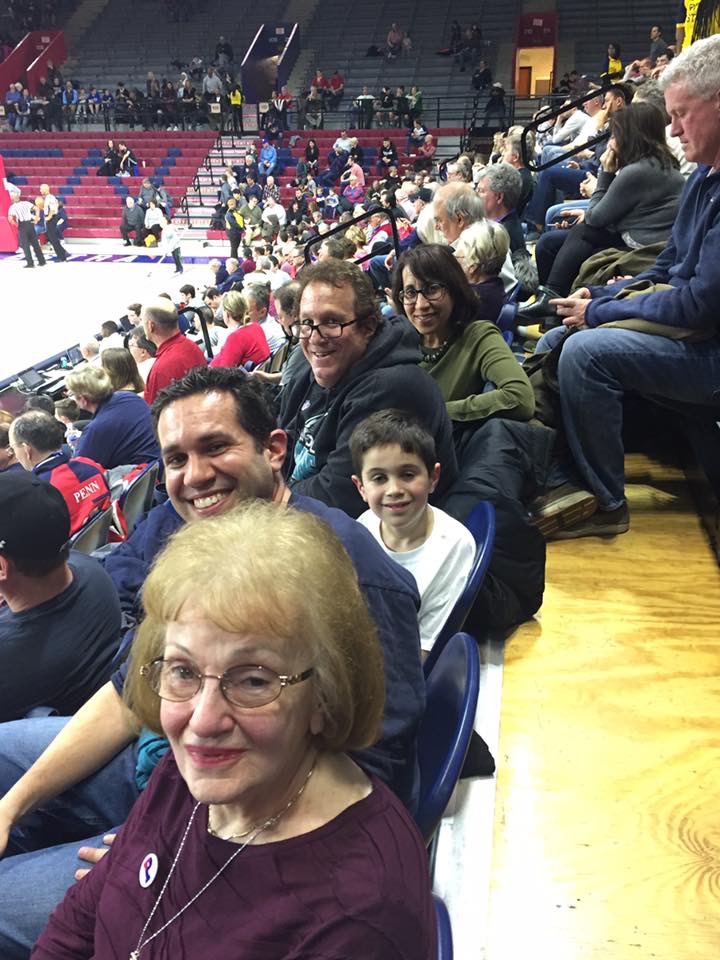 Some of the Windheim clan, across four generations: Lila, Justin, Matthew, Bob, and Randi.

For many years, I have seen my old classmate Justin Windheim C’03 at the Palestra, always recognizing him as one of the most passionate—and loudest—Penn basketball fans. But it wasn’t until last week that I discovered the roots of his diehard fandom. “I literally wouldn’t be here if not for Penn Athletics,” he told me in a Twitter message. Naturally, I was intrigued.

A week later, I found myself on the phone with Justin and his 83-year-old grandmother Lila, with whom this particular story begins. It was 1950, she tells me, when a boy asked her to come to the Penn­­–Virginia football game at Franklin Field, that season’s opener. A football fan who was in high school at the time, she happily accepted the invitation. At the stadium, the boy introduced her to five of his friends. Only one of them turned to her, shook her hand, and said, “So happy to meet you.” That was Dan Windheim W’52—“a handsome, wonderful young man with beautiful blue eyes,” Lila says. “My little heart fluttered.”

They started dating and soon married. Countless dates were had at Franklin Field and the Palestra, where sometimes romance was lost—in the best way possible. “The man was the biggest sports fan in the world,” Lila says. “We used to go to basketball games and park near Franklin Field, and by the time I got out of the car, he was already in the Palestra, in his seat. He ran.”

In time, they passed down the tradition to their three children, including Justin’s father, Bob. Remarkably, less than 25 years after Lila and Dan met at Franklin Field, Bob (then a freshman at Drexel) was inside the same stadium when he heard a girl’s voice behind him yell “Offsides!” at a Penn football game. That was Randi Mackler Windheim C’77, whose football knowledge impressed him. So when he saw her again at the Palestra that winter, he asked her out for the first time. A few years later, he popped the question—outside the Palestra, of course. Three years later, Justin was born. “My grandma says all the time we wouldn’t be here without Penn,” Justin says. “Any time she’s at a game, she’ll talk about it.”

Justin was hooked early. He went into the Penn basketball locker room as a baby, posing for photos with former players like Fran McCaffery W’82 (now the head coach at the University of Iowa) and Paul Little W’83. When he was about 18 months old, Lila remembers taking her grandson to the Red and Blue Scrimmage and making his “little hands” do the appropriate motions during the “Red and the Blue” song. “As we took him home, my husband said, ‘He’s going to every Penn game that I’m going,’” Lila recalls. “And so we started the dynasty.” 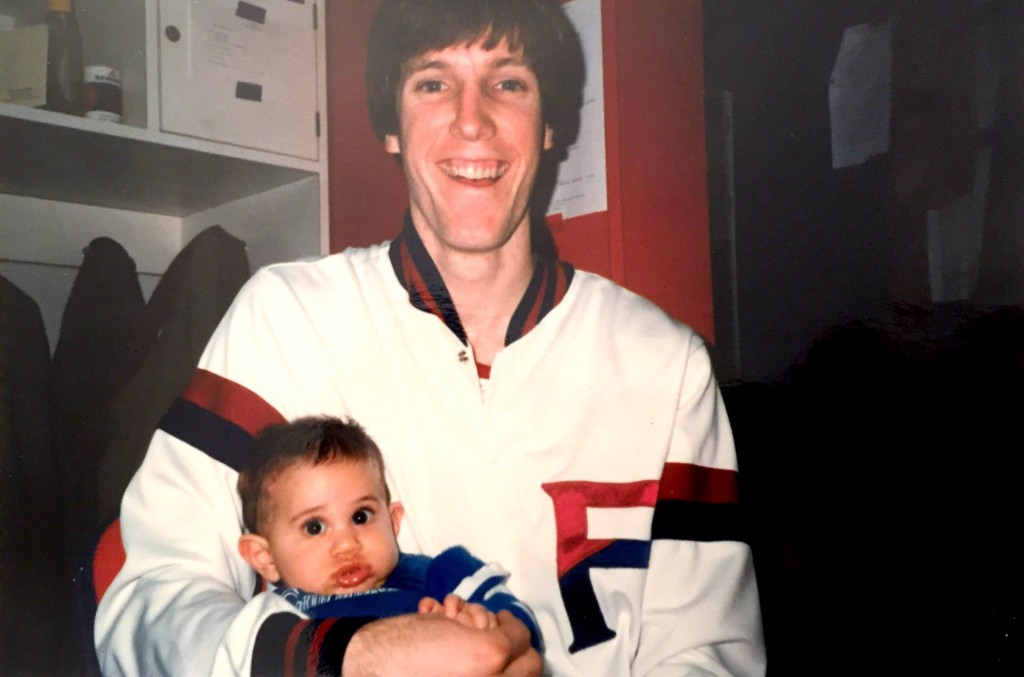 You can certainly call it a dynasty. Across four generations, the Windheims have kept a special place in their hearts for Penn sports. Justin’s dad and his mom’s two brothers, Harvey Mackler W’75 and the late Scott Mackler C’80 PT’80 M’84 Gr’86 (who passed away in 2013 after teaching at Penn while battling Lou Gehrig’s disease) followed the Quakers through the NCAA Tournament during their run to the 1979 Final Four (more on that team coming in the next print issue). Some of them spent three hours in the car during the Blizzard of 1996 to get to a Penn–Princeton game, although Justin says his mom “can’t even go to the Princeton game in person because it breaks her nerves too much.” They’ve befriended several players, gone to countless tournament games, and been full-time season-ticket holders since 2004, sitting right across from the Penn bench in Section 115. Justin even had his bachelor party in the Palestra.

And it all began with Dan Windheim, almost 70 years ago.

“Besides being the most wonderful sports fan, he was one of the kindest, nicest gentlemen,” Lila says. “And his grandson takes after him.”

“Except when I’m yelling at the refs,” Justin chimes in.

On  Friday, Lila will accompany Bob, Randi, Justin, and Justin’s eight-year-old son Matthew, an aspiring diehard himself who enjoys playing the Penn fight song on his trumpet, to an important Penn–Dartmouth game. “She makes us promise every year we’ll bring her to at least one,” Justin says. And it’s even more special this time of year since February 14 is Valentine’s Day as well as Bob’s birthday (many of which have been spent inside the Palestra) and February 13 marked the four-year anniversary of Dan’s death. Justin heard the terrible news about his grandfather while eating dinner outside the Palestra. They went inside for the first half of a game “in his honor,” before leaving at halftime. 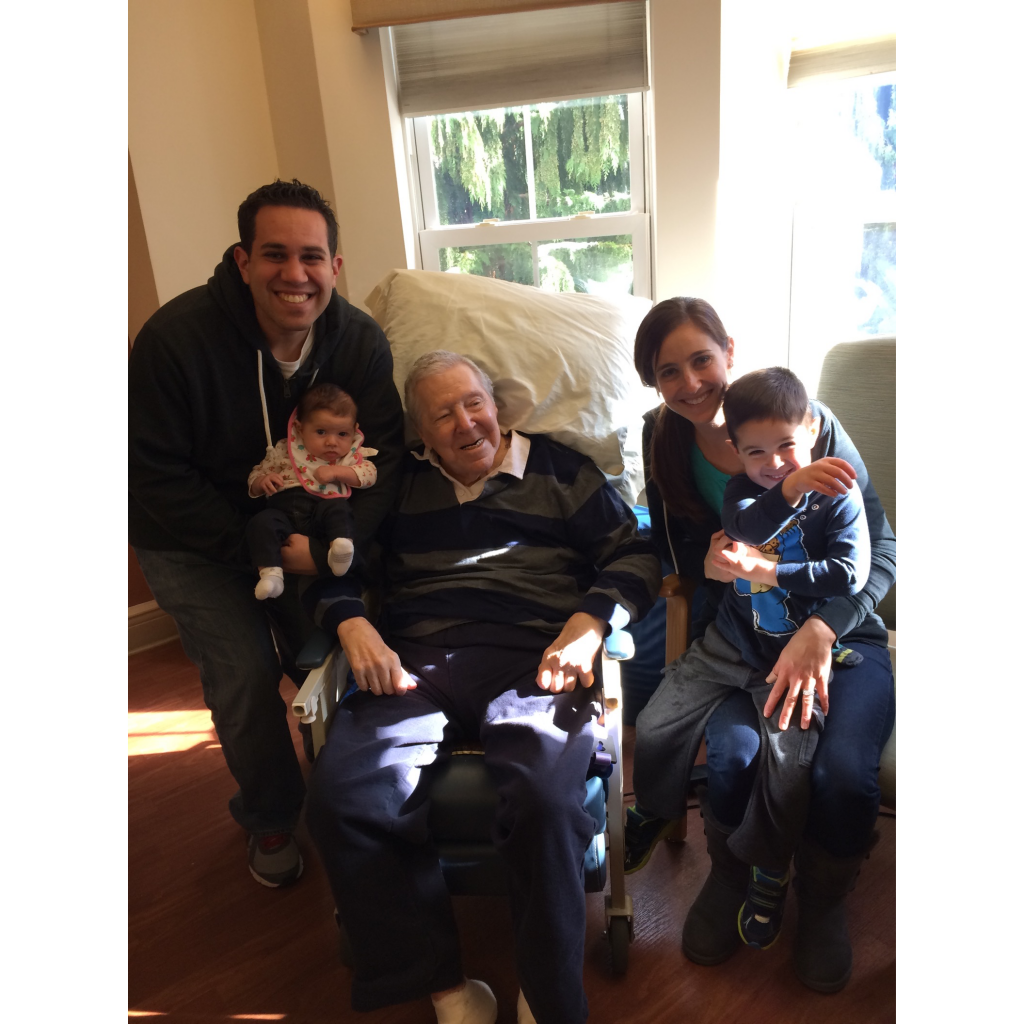 Before he died, Dan Windheim with Justin, Justin’s wife Jamie, and his great-grandchildren Matthew and Emily.

“When I walk into the Palestra,” Lila says, “I go back to my youth.” She adds of her late husband, “His entire life was really dedicated to Penn sports”—so much so that he once told her that he’d be happy to be buried underneath center court of the Palestra. That didn’t happen but a Valentine’s Day remembrance four years after his death is especially meaningful to her and the rest of a family that’s found love and romance inside Penn’s most iconic sports venues.

“In my mind,” Lila says, “this is honoring him in a way he would love with all of his heart.”