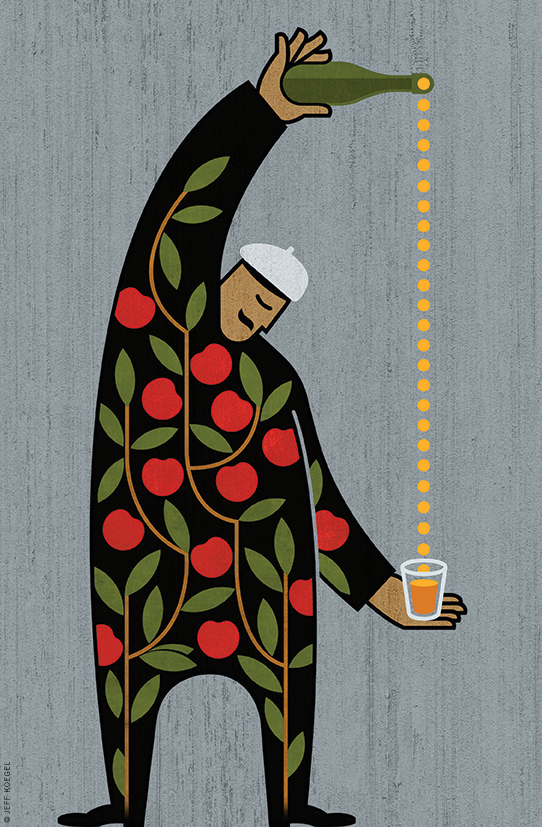 An apple a day, Asturias-style.

By Beebe Bahrami | As the final rays of daylight skipped softly over the Atlantic, some five dozen neighbors crowded into a bar tucked at the feet of the Cantabrian mountains at the ocean’s edge in northwestern Spain. For the inhabitants of one of several villages just outside the town of Ribadesella, this was an evening gathering like any other. For me, it had become a long-awaited opportunity: my friend José Luis had just introduced me to Don Paco, the town’s celebrated cider maker. At last, my chance had arrived to talk to a producer of the effervescent fermented apple juice that helped mark Asturias as a unique province of Spain.

In all my time exploring and writing about this lush green realm—an arrowhead-shaped autonomous principality brimming with bagpipes, Celtic motifs, and apple-producing hills—I had yet to meet a man who made sidra. I loved its crisp, dry edge, and the floral flavors of the fruit.

As Don Paco and I leaned into the wooden bar, José Luis seized a dense green champagne-like bottle, stepped over to a thick wooden pillar flanked with a silver catch bucket, and held a pint-sized glass at thigh level while sweeping the bottle loftily overhead with his other arm. The liquid shot out in midair, arched, then cascaded into the glass. It was a move worthy of its own yoga pose. Sidrasana, it should be called. Yet even with his skill, there was a bit of back spray, which landed in the bucket.

We clinked our glasses, sipped, and looked out toward the towering gray and green mountains that separated the province from the rest of Spain—“and the Castilians,” as one proud Asture emphasized. She uttered her proclamation near a bulletin board crammed with Celtic designs and community posts in Asturiano, a Romance language flavored with small remnants of the older Celtic Iberian tongue once spoken here.

Emboldened by the sidra, I led with a question that was all the rage in Asturias, where many people chafed at any modern “improvement” that impinged on good tradition.

At that moment it seemed that the sun fully slid below the ocean, darkening the room—and the look on Don Paco’s face.

Thinking in English while speaking Spanish is a risky business. As it happens, translating the word preservatives is not simply a matter of changing the final e to an o. In fact, what I had asked this esteemed elder was: Do you put condoms in your cider?

Don Paco’s presence in this bar, known for its socialist tilt, did not alter his traditional views on men and women. He liked the former to be gallant, and the latter, proper. I might as well have knocked the perfectly slanted black beret off his head. I turned to José Luis, who was now doubled over with laughter. As one of the few people in the bar who recalled some of the perfunctory English everyone had endured in school, he had just worked out what I’d meant to say. When he recovered from his fit, earning Don Paco’s ire as well, he explained.

“She meant to ask, Do you add anything to conserve your cider, as some producers now do for longer shelf life,” he explained. “In English, preservatives are not condoms, but conservadores—which,” he added, now turning back to me, “in English, means conservatives—a funny double meaning, no te piensas?” He began to chortle again, this time at his word play.

I tried to mend things with the Don.

“It is pure, absolute heresy,” Don Paco interrupted, “to add anything to cider but apples.” He threw down a five-euro bill as one would a gauntlet, paid for our bottle, and grabbed his wooden walking stick. “Finish up,” he said, looking also at José Luis’s wife and my husband. “Grab your jackets.”

In unquestioning compliance, we faithfully trailed after him down the street into the darkening night. He stopped before a thickly built stone barn whose old arched wooden door was secured by a cast iron lock. Don Paco slipped a heavy skeleton key into it and turned twice. The door groaned. He pushed it forward and led us in. Before us towered an immense cylindrical wooden press. The air was fragrant with fresh apple skins and yeasty fermentation.

Don Paco showed us how the apples would be loaded into the cylinder and slowly be pressed, by hand-cranking a huge wooden lid fitted on a wooden corkscrew that rose from the center of the press. Holding a lever and walking and rotating slowly around, a person, like a mill mule, turned and pressed until no more juice flowed into the wooden catch basin. The juice was then transferred to wooden barrels.

Apart from wood, nothing was permitted to interact with the taste of the apples. “Each year has its signature taste,” explained Don Paco, “its own special perfume, density and flavor. One should never ruin that with interfering materials of any kind. Nothing should blunt its nature.”

One wall was lined with golden glimmering bottles and two were lined with dozens of fermentation barrels. “Those are made of chestnut,” Don Paco said, “the traditional wood for curing the apple’s natural flavors.” Perhaps it was not only the apple varieties popular here, or the mountain orchards kissed by sea air, but also the use of chestnut instead of oak that accounted for the difference in taste between Asturian ciders and their French and American counterparts?

Apples, which originated in present-day Kazakhstan in Central Asia, are made for travel. Their seeds pass through animals’ digestive tracts unharmed, to be deposited miles away. The apple may have made it to Iberia via a wild horse or a wayfaring Celt. Some 2,000 years ago, classical writers, both Roman and Greek, noted that the native Iberian Celts had apples—though they were more like crabapples. Strabo mentioned a native fermented product and some think he may have meant cider, for both wine and beer were later introductions compared to the native apples that may have been utilized for fortified drink in earlier times.

Don Paco took a bottle from the glimmering wall, and knocked out the cork with a spectacular upward sweep of his pocketknife. The projectile rebounded against the press and tumbled to the floor. He grabbed a wide-rimmed glass and gracefully lifted the bottle above his beret. Without looking, he held the glass with his other hand to his thigh and released a thick golden liquid arch overhead. It slid right into the vessel. Nothing splashed.

In Asturian tradition, he passed the glass, first to José Luis’ wife, then me, then the men. Each of us turned the glass to sip from a fresh spot on the rim. When it was my turn, I tasted for the first time a cider that truly spoke about its birth: unsheathed, pure, and utterly unique. It was feisty and frothy, neither overly strong nor overly sweet. It had several distinct notes that riffed harmoniously—crisp sun-nourished skin, pleasing salt air winds, fresh rains and fragrant flowers, cut grass, tart but supple flesh, and native yeast that made it all happen without any assistance beyond the weight of the wooden press.

Most people in this village between mountains and ocean were return migrants, repopulating places once abandoned. During the mid-20th century—hard years under Franco and followed by several economic downturns—they had gone abroad, some to Mexico or Argentina and others to Switzerland or Germany. They worked hard and dreamed of the day they could return. Eventually they reclaimed their ancestral places, often building new homes in the place of ruins.

Thanks to Don Paco’s cider, I learned that night that he was the only person who had never departed from the village. People looked to him as the roots, the trunk, and the branches. Here one did not export cider, or put preservatives in it, or squander the old quality of life that Franco had briefly halted. That Don Paco made the meanest cider in town was the visible effervescent expression of a deeper, more precarious cultural reality, where knowledge and standards had to be maintained or the old world would be lost.

Don Paco drank last. He drained the glass, then looked at me.

“This is proper cider. This is what this fruit, this orchard, this sun, wind, rain, and ocean taste like. This year. Next year will be another delight.”

Beebe Bahrami Gr’95 is the author of Café Oc and Café Neandertal.