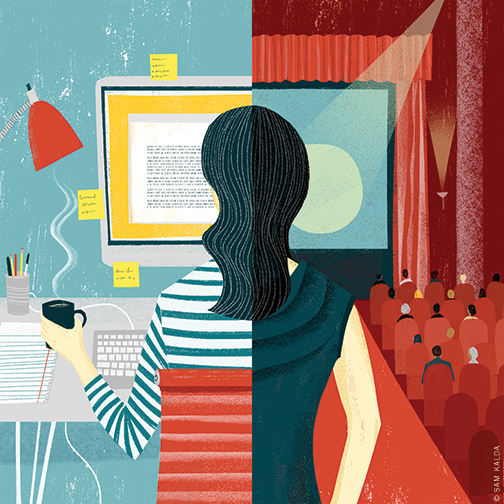 The long and winding road from manuscript to silver screen.

By Caren Lissner | Act I

I was sitting at a rooftop restaurant in Canada, staring across the table at two crème brû¬≈lées that were being abandoned by a pair of young film stars. All of my life had led up to this moment: a dinner with producers and actors to celebrate the movie that had just been made out of my book … and a chance to raid their desserts.

We were at the Toronto Film Festival, where Carrie Pilby had just premiered before 1,500 people.

Having one’s novel made into a movie is the stuff of writers’ dreams—especially a writer who spent the first 10 years of her literary career writing four YA novels that got rejected. But artistic dreams come true slowly. Mine took three-quarters of my life.

I’ve been thinking up stories for as long as I can remember. In grade school I filled loose-leaf notebooks with essays, satire, and attempts at young-adult novels, inspired by the books I holed up with on weekends. At Penn I majored in English and wrote humor pieces for the DP and Punch Bowl. Several months before graduation, I finally got paid for an article. While daydreaming in a screenwriting class, I dashed off an opinion piece about how I’d sung Christmas and Hanukkah songs in public schools and it hadn’t ruined my life. I sent it to The Philadelphia Inquirer, which called my dorm room to accept it. I had my first paid writing credit to use in cover letters for future manuscripts.

I landed a job as a reporter for a community newspaper chain in Hoboken, New Jersey, but I still had longer stories to tell. By night, I hunched over a Macintosh Classic in my second-story window, banging out teen novels to send to New York publishing houses across the river. Meanwhile, I read enough magazine stories about “30 authors under 30 to watch” to wallpaper my apartment.

When I was about to turn 30 myself, I decided I should try writing something different—something funny.

What started as an offbeat rant about renting movies at the local video store became Carrie Pilby, a novel about a brainy single woman who graduates from college early and has no idea how to socialize or date in New York. She thinks she knows everything, but her black-and-white moral convictions are challenged by a cast of characters. For her flashbacks to college, I drew upon my experiences feeling isolated at Penn.

Around 2001, I mailed the manuscript to half a dozen literary agents. One bit. For the first time, I was on the cusp of a trend. Single-girl-in-the-city books were all the rage around the turn of the millennium. Bridget Jones’s Diary had been published in 1996, followed by The Girls’ Guide to Hunting and Fishing in 2000. Carrie Pilby came out in June of 2003. Reviewers dubbed it one of the smarter books in the genre. It sold 74,000 copies.

My agent sent the manuscript to a film agent in LA, who shopped it around. In 2003, a production company paid $5,000 to option the screen rights for TV for a year, but failed to bring the project to fruition. Four years later, Disney/ABC optioned the rights for $7,500, but also didn’t make anything of it. Only 2 percent of optioned properties make it to the screen, according to articles I’ve read. Still, a girl can dream. Which I kept doing … for another five years.

In 2012, a producer named Suzanne Farwell emailed to say she was a “big fan” of the novel and ask after the screen rights. She had worked onIt’s Complicated, Something’s Gotta Give, and The Holiday. She had given the book to Susan Johnson, a producer of independent movies who wantedto direct her first feature, but needed the right project. The two women optioned the rights to my novel and I put the contract in a drawer, knowing how this game worked.

Yet little by little, the project progressed. In 2013, the Susan/Suzanne duo mounted a $60,000 Kickstarter campaign to hire a screenwriter. On the film’s Kickstarter page, Johnson explained, “I’ve always wanted to find a female Holden Caulfield. Carrie is brilliant, fragile, funny, conscious, inquisitive and brave enough to say the things we wouldn’t dare.”

The pitch also drew attention to how few films are helmed by female directors, noting that only 7 percent of the members of the Directors Guild of America are women. The campaign clicked and the duo hired a screenwriter named Kara Holden. Somehow, they’d found their own female Holden.

Over the course of the next year, Johnson sent me several drafts of the script to review. No one wants to be that author—the whiner who wants to change everything back to the way it was in the book. Luckily, the script was funny and true to the story. It extended a few storylines whose resolutions I’d left vague (my English professors at Penn always preached subtlety). Some suggestions were taken; some were not. The script’s original first scene had Carrie climbing out of bed in Snoopy pajamas. I thought Peanuts PJ’s were a little babyish for a character who later gets seduced by her professor. The director and producers agreed, changing them to Doctor Who jammies (nerd power!), but then ultimately scrapped the scene altogether.

With script in hand, the filmmakers could lure actors. In January of 2015, the Hollywood Reporter announced that Oscar-nominated actress Hailee Steinfeld would play the starring role. I spent the day at my newspaper job secretly Googling myself every three minutes. Luckily I didn’t get hairy palms.

Ultimately Steinfeld had scheduling conflicts and was replaced by British actress Bel Powley, whose indie film Diary of a Teenage Girl was earning raves.

But more talented actors came on board, including Saturday Night Live star Vanessa Bayer C ’04 and the awe-inspiring Nathan Lane.

In November, the producers set up a “Carrie Pilby Production Office” in a Manhattan skyscraper. It was a bare-bones affair, with storyboards and Polaroid photos taped to walls, and Christmas lights strung across someone’s Mac. I spied a restaurant delivery receipt that had been paid for by “Carrie Pilby.” It was surreal to see that a character I’d created at home in my sweatpants had just ordered General Tso’s.

Filming began on Monday, December 14, 2015, in a small Manhattan building that would serve as Carrie’s apartment.

A production assistant led me up narrow stairs to the set, giving me ground rules: No talking, turn my phone off, and stay out of the actors’ line of sight when rolling.

My character’s apartment was charming, full of books, chairs, and beautiful wood floors. But suddenly I felt the floor beneath me shift. As though determined to prove what a newbie yokel I was, I felt myself beginning to faint. (In my defense, I had a head cold and had taken Benadryl.)

“Get her water,” someone said.

“It is overwhelming,” Susan said, kindly.

Luckily I grabbed a window sill to steady myself, and tried to hide my mortification.

I returned to the set the next week, for a late-night bar scene in the Bronx featuring Vanessa Bayer.

Vanessa was more than just funny; she was a great actress, lacing her lines with the perfect blend of mischief and intimacy to guide our heroine into sin.

“I heard you went to a good school,” I said to her during a break.

“Have you been back?’ she asked.

“I’ve been to Writers House, which unfortunately didn’t exist when I was there,” I said.

Then she had to get back to filming. I wandered to the next room, where snacks were laid out for the actors. Suddenly Vanessa was standing next to me, studying the spread. I just knew what was going to happen—she was clearly about to offer me the head writer job on SNL After all, hadn’t I sent a resume to Lorne Michaels upon graduation in 1993?

Bel Powley was asking her about the cereals on the table.

Clearly the job offer was going to wait.

In the third week of filming, I had my cameo. I sat on a green bench in Central Park while Bel walked past me to meet her father, played by Gabriel Byrne. Sitting on a bench without speaking was the ideal job for an actor with my range.

During the fourth and final week of filming, I got to meet Nathan Lane, who plays Carrie’s therapist.

“Well,” he said, showing me the book, which he’d marked up, “It’s a beautiful book, and I think it will be a beautiful movie.”

“Thank you,” I said. Luckily, I was whisked away before I could faint.

In July of 2016, the project was selected to premiere at the Toronto Film Festival. I spent months agonizing over what to wear. In the end, no one cared about my plain black dress—which which practically screamed, “Don’t pay any attention to me at all.”

But what about the part I really cared about—the audience reaction? The filmgoers, men and women of all ages, laughed often and even applauded for two key scenes. I was thrilled.

By the end of the festival, the producers were negotiating with a distribution company to release the film in theaters in spring of 2017 (tentatively late March).

Before Carrie Pilby got accepted by a publisher, I had spent years worrying that I’d never see one of my books in print. Now I’m in a new waiting period—finishing up another book, and hoping someone will pick it up. Despite all the “overnight success” stories we hear about, many of my artistic and entrepreneurial peers and I are at a point where we’ve achieved some measure of success, but not enough to live entirely off our independent projects. It takes a lot of time and work to climb the steps to creative fulfillment. But luckily, we get there eventually. Someone has to be the 2 percent.

So when, after the Toronto premiere, the filmmakers, actors, and writers were whisked to dinner, I tried to make the most of it. I talked Jason Ritter’s ear off about how funny he and Bel were during their awkward dating scenes, how funny his father had been in everything, and whether he would appear in the upcoming final season of Girls. (Can’t tell ya.)

And when Bel Powley and her boyfriend left without eating their crème brulées, there was no question that I had to polish off at least one of them. Don’t you love happy endings?