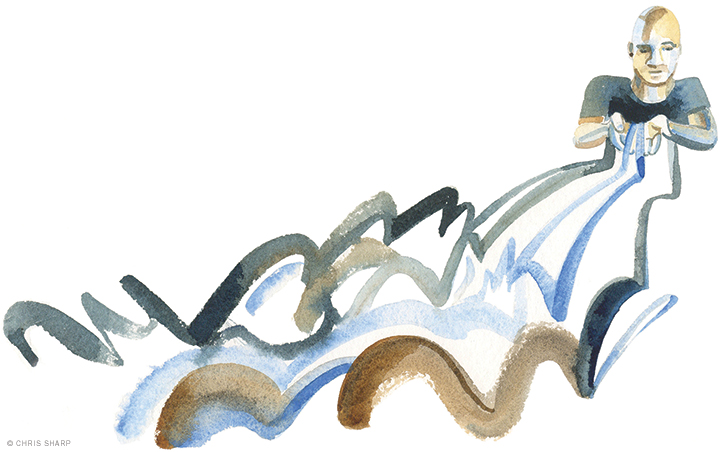 “Submitting the direction of our lives to the Current is one of the most difficult endeavors we can undertake.”

This river is ecstatic. And with jumping in we risk everything. We risk losing ourselves. We risk not coming back. We risk sinking to the bottom. We risk allowing the Current to guide us rather than being guided by our own feet on the banks.

From time to time I sit on the banks of the river that runs through my city. Those who first walked this land and those who first swam this river named it Toolpay Hanna, which in the language of the Lenape means “Turtle River.” When the river was (re)discovered by the exploring Dutch, they named it the Schuylkill River, which means “Hidden River.”

There is a Hidden River that carries us away. Protective and free and grace-filled like the turtle. The walk to this body of water is ten minutes from my desk. I find my way to its banks. And sit. And dream. And imagine what it would be like to jump in. I’m a good swimmer. I’d be fine. But that isn’t going deeper. I want more than just a brief dip in the waters.

Faith is jumping in and letting the Current take me where It wants. Submitting to the Wind and the Living Water and the “Ground beneath it all,” as Paul Tillich might call it. We (seem to) control our steps and our direction when journeying on the ground. Journeying in the River where the strong Current moves us, where the direction laid out by the river guides us toward our destination, is a very different path—one that calls for a deep trust and a deeper faith.

It’s dangerous. There are painful rocks beneath the surface that we might strike a foot on. We might be bitten by something that dwells within. We might go over the waterfall. We might not come back out of the River. Traveling by River was never promised to be easy, but it is indeed holy. Submitting the direction of our lives to the Current is one of the most difficult endeavors we can undertake. But the walker who wants to go deeper must indeed jump in. With it comes love unimaginable.

And while trusting and allowing the Current to guide us brings life and love, there is a cost. That cost is the forfeiture of our perceived control.

I first contemplated this notion of not being in control during my season as a hospital chaplain. I did not enter seminary with the intent of going into chaplaincy. All students were required to complete something called C.P.E., which I would later find out stood for Clinical Pastoral Education, a phrase that didn’t clarify what was in store for me much more than the three abbreviated letters. C.P.E. is an internship experience during which seminarians are asked to serve as ministers in what is usually a non-congregational setting. And for me that setting was a hospital in West Philadelphia.

I am asked from time to time by my students, “What exactly is a chaplain?” I often reply, only half joking, that “I’m still trying to figure that out!” If forced to offer a definition, though, I might say that a chaplain is a clergyperson or spiritual leader serving outside of a congregation, usually as a part of a team.

The particular role of a chaplain, of course, differs from situation to situation. Some chaplains preside over services and various types of gatherings while others emphasize counseling more than ceremonial service. Still other chaplaincies revolve around programming and education.

We describe our chaplaincy at Penn as having three particular facets. We like to say that we are the “heart of religious life,” meaning that we “oversee” and journey with more than 50 different campus ministries. Along with overseeing religious life, we are a part of the crisis response and counseling team at the University. When tragedy strikes, we, along with student intervention services, public safety, and our counseling office, reach out to affected students and community members. And from time to time, I am tasked with making the call that no parent ever wants to receive to tell them that their greatest fear has come true. This is by far the most challenging part of chaplaincy.

In ways not unlike physicians and nurses, the chaplains of the hospital where I did C.P.E. are assigned a floor or a specialty field, and there they “take on” a certain number of patients. During that first summer I was assigned the neurology floor, and every day I would make my rounds, checking the charts of each patient that I was visiting and then adding to that chart after our conversations. We were a part of the care team (along with the doctors, nurses, social workers, and surrounding families). Some cared for the bodies of the patients; we cared for their hearts, minds, and spirits.

Along with our responsibilities to the floors we were assigned, each of the five C.P.E. chaplain interns was asked to take turns spending the night on call in the hospital. This entailed us sleeping in the office and responding to the needs of the entire hospital, including the emergency room and trauma bay whenever we might be called upon throughout the night.

On their first overnight, young chaplain interns are given the opportunity to shadow a veteran chaplain. I had just turned 23 years old. A year before I was living in a frat house and finishing up college, and now I was visiting hospital patients, baptizing babies, and giving last rites. In reflection, I think that I was probably a little young to be involved in an intense hospital chaplaincy like that one, but on that very first night on call, I had no idea what I was getting into.

The gentleman I was shadowing was a Lutheran pastor who felt called to chaplaincy. He was nearly 40 and had been at the hospital for two years. I remember the anxiety I felt when the rest of the chaplaincy department left at the end of the work day leaving the two of us to keep watch over the whole hospital.

We began by making rounds on each of the floors, checking in with each department’s head nurse to see if there were any patients they thought could use a visit. These cold-call visits brought us in touch with people who were awaiting surgery, recovering from surgery, being treated for heart trouble, waiting to deliver a baby, and more. About two hours in, the on-call pager went off. We were called up to the room of a man who was afraid because of his pending surgery. I kept quiet while the more experienced chaplain listened and tried to be present with all that the man was feeling. In the midst of our prayer we were called to the labor and delivery floor where we were asked to pray for a prematurely born little girl. We left there to respond to a page for a woman who was dying. Her family wanted prayer for her transition. Nearly out of breath after racing up the stairs and down the hall, we arrived at a room holding more people than it was designed to. The African-American family surrounding the bed could have been my own. And the aged saint covered in white sheets might have been one of my grandmothers. She had a stillness known only to those who are just minutes from seeing God.

After some brief introductions we held hands in a circle and my mentor chaplain offered a prayer commending her soul to God “from whence she came.” While we were still in prayer, the machines signaled to us that she had passed away.

After hugs, gratitude, and condolences, my teaching chaplain and I left the room. Standing by the elevator, he asked how that was for me. He must have seen the tears on my face. I replied that “It was beautiful and painful. Awe-filled and scary. And if I’m being honest, it pushed a few of my buttons with my mom and my dad both passing aw—.” I didn’t even finish my thought before the pager went off again, alerting us to the fact that a trauma patient was on the way to the hospital.

With speed, we made our way down the stairs and through various shortcuts that I would later use on future on-call nights. When coming the back way to the emergency room there was a long hallway whose walls were painted with a slightly out-of-place mural of a light blue sky. The sky in the mural is filled with butterflies and birds and flowers and very peaceful signs of nature.

While walking this long hallway, reeling from the chaotic pace of an evening that would not even permit me a moment to process my feelings, I flippantly said, “Man, this is out of control.” The chaplain stopped and turned to me and said something that I have never forgotten.

“Not being in control is a part of the discipline.”

It takes a certain amount of trust, humility, and—if I may—faith, to be able to ride the sometimes wild uncontrollable Current of the River. I do not claim to be totally at peace with it, but what that chaplain told me has proved to be wise counsel and an important challenge over the course of my ministry and life. I imagine many ministers and caregivers can relate. There is certainly a rhythm to ministry. Many traditions have annual holy days and weekly services that provide an important consistency to the vocation. For me, I move along an academic calendar that brings forth convocation at the beginning of the year, midterms, fall break, finals, and then winter break. We resume with the second semester, spring break, midterms again, finals once again, and then graduation before entering the much-welcomed summer recess. In late August, we start all over again.

And yet with ministry there are holy interruptions. Some are simply individuals dropping by the office because they need to talk. They might interrupt sermon planning or some of the other quieter aspects of ministry and life. Other interruptions are more jarring, like the middle-of-the-night phone call alerting you to an accident.

If I may be completely forthright, over the years when I have found myself too often interrupted by the more serious kind, that is when I tend to explore other job possibilities quite simply because what I learned that first night of C.P.E. was true: ministry truly does have moments when it is out of control. I have been tempted to swim to the banks of this vocational river and climb out. But staying within the out-of-control-ness of ministry and the out-of-control-ness of life is an important discipline for us all to swim through.