Confirmation and Its Discontents 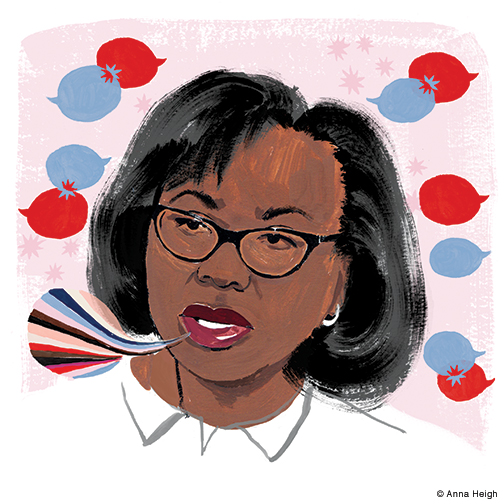 On October 10, four days after the Senate confirmed Brett Kavanaugh to the Supreme Court, by a 50–48 vote, Anita Hill addressed a packed crowd at Irvine Auditorium. The circumstances and setting evoked a sense of déja vu. The iconic legal scholar had taken same stage in the spring of 1992, to offer some of her first public reflections on the elevation of Justice Clarence Thomas, who was narrowly confirmed despite multiple allegations of workplace sexual harassment, of which Hill’s had been the most prominent.

In a conversation hosted by the Alice Paul Center and Penn’s Gender, Sexuality, and Women’s Studies Program, Hill joined UCLA and Columbia Law School professor Kimberlé Crenshaw (who had been a legal advisor to Hill during the Thomas hearings) and Penn’s Dorothy Roberts, the George A. Weiss University Professor of Law and Sociology and the Raymond Pace and Sadie Tanner Mossell Alexander Professor of Civil Rights. 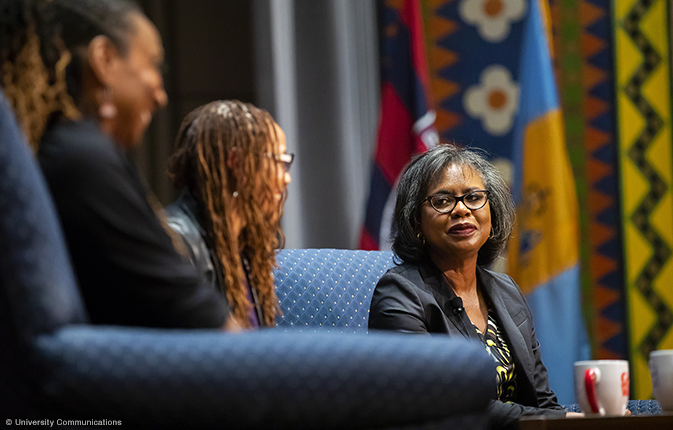 The similarities between the Thomas and Kavanaugh confirmations—which in each case involved a judge expected to move the Court toward the right, surfaced multiple allegations of sexual misconduct, ultimately gave the benefit of the doubt to men over women, and imperiled public confidence in the Court’s political independence—suggested a straightforward question. “What, really, did people learn from 1991?” Crenshaw asked. “And what is the lesson plan that comes out of this teachable moment” in 2018?

First Crenshaw observed some differences between the two Senate judiciary hearings. In 1991, Hill was questioned by an all-male, all-white Senate panel in the Kennedy Caucus Room, a vast space that came across like an intimidating “tribunal.” Christine Blasey Ford, by contrast, testified in a small, comparatively intimate committee room—and was not questioned directly by any of the Republicans on the judiciary committee, who instead hired Arizona prosecutor Rachel Mitchell to speak for them.

And although all of those Republicans were white men, the committee’s Democratic members included four women, two African Americans, and an Asian American.

“That is more than just optics,” Hill said. “That is true substance.”

Hill pointed out other substantive changes since 1991. “The Civil Rights Act of 1991 passed within weeks of the Thomas hearing,” she pointed out. “The number of complaints with the EEOC [US Equal Employment Opportunity Commission] doubled in the two years following the hearings. Women changed their workplaces—women and men—putting in place policies and procedures that had never been there before. Today about 90 percent of companies have [sexual misconduct] policies in place, but at the time of the hearing, it was around 10 or 20 percent.

But both women lamented the ways in which optics broadly trumped truth-seeking in the Kavanaugh hearings, which were structured in ways that deprived Ford of opportunities to rebut Kavanaugh’s testimony or augment her own by means of additional witnesses. For Hill, the dynamic was frustratingly familiar.

“A judiciary committee hearing,” she reflected, has a dual purpose. It is meant “to inform the Senate about the character and fitness of the individual who is the nominee. But the hearing is also to inform the public—it is to present to the public the significance of the Court, and more importantly, the significance of the integrity of the Court. It’s to help people understand the issues that are before the committee—whether they are legal issues or issues related to character.” Public understanding of such issues, she said, “aligns with the interest of having a Supreme Court that people have confidence in, have faith in, believe in the impartiality of, and believe in the integrity of.”

But in both 1991 and 2018, she continued, the Senate judiciary committee valued swiftness over thoroughness.

“They didn’t want the American public, in 1991, to know what Sukari Hardnett, Angela Wright, and Rose Jordain had to say,” Hill observed, referencing other women who had been prepared to testify about Thomas. “And so they kept them from testifying, saying what was more important was their formal rules—[meaning] maintaining control over the information [the public] got.”

Similar obstacles met Ford, who was given less than a week to gather evidence and prepare testimony, and whose claims were only deemed to merit a six-day FBI investigation (echoing the Bureau’s three-day investigation of Hill’s allegations in 1991) described by FBI Director Christopher Wray as purposely “limited in scope,” excluding numerous witnesses who sought to contribute sworn statements.

“In 1991, people wanted to understand sexual harassment,” she said. “In 2018, they wanted to understand sexual assault: What is it like to go through that experience? How does a person come forward to respond when they have been assaulted? What is an appropriate way for us to evaluate—in the context of a confirmation hearing, not in the context of a criminal procedure—the significance of the information that Professor Blasey Ford brought?”

Despite having had 27 years to design a mutually agreed-upon procedure to deal with such issues, Hill remarked, the Senate had neglected to do so, setting the table for a starkly politicized spectacle that served all sides poorly—and none more poorly than the public.

Going forward, she said, “the question is not just, How do we make sure our representatives actually represent us and tell the truth?—but, how do we change the way they do business so they will be responsible and accountable when any of these issues come up, that they make sure the American public is well informed—informed enough to make their own decisions about how [representatives] should be voting in a confirmation process.”

Crenshaw deplored the process as tainted by both gender discrepancies and a deeper structural asymmetry. “He is losing his mind right there in front of the world,” she remarked about Kavanaugh’s testimony—which encompassed tears, righteous anger, and explicitly partisan accusations of “revenge” for his own past work as a prosecutor in Ken Starr’s investigation of President Bill Clinton. “We all know that if she had done it, they would have run her out of town on a rail. But he can do it! And people see it as validating rather than invalidating—and feel emotionally connected to him,” she observed, calling it a “gendered distribution of support and concern.”

“Why is it that a guy who told little lies—they were obvious lies, everyone knows that they were lies—why is it that a guy who came in and took a shotgun approach to everybody who was left of the Republicans, a guy who said ‘what goes around comes around’—how is it that all the various pieces of evidence that in another situation would suggest this person is not being truthful, and this person is giving us evidence of lack of a judicial temperament—how is it that all of that stuff can happen, and someone else can give testimony that no one can really go after, and at the end of the day it’s sort of a draw?”

The problem, Crenshaw declared, is “the discursive capital that men have over women”—essentially, a built-in benefit of the doubt. “It’s a problem in sexual abuse and sexual assault—but it’s a problem everywhere else, other forms of discrimination and inequality in your workplace … [And] the consequences are that we have a Supreme Court that has a couple people who are on it because of this huge discursive inequality. We also have a republic that doesn’t have campaign finance reform, the Voting Rights Act, we can go down the list of all the things made possible by that 5–4 vote—and all of that comes back down to the failure to be able to interrogate this.”

More broadly, Crenshaw lamented how much the confirmation process has come to hinge on ideological gatekeepers in the private sector. “You can’t really get nominated as a Republican if you don’t pass the litmus test that is laid out by the Federalist Society,” she noted, referring to a legal organization founded in 1982 to advocate for limited government. “I think most Americans don’t really know that. They don’t have a sense that this isn’t just about whether he is qualified or not—he already ran his own gauntlet and it put him in this particular position.” A related organization, Judicial Crisis Network, financed a multimillion dollar campaign to support Kavanaugh’s confirmation.

“Christine Blasey Ford had no support,” Hill observed. “There was no organization that was on the inside or connected with a decision-maker that was going to be able to help her. We need to really understand that when we’re talking about sexual misconduct and abuse, we’re not just dealing with the behavior, we’re dealing with systems that protect it, and sometimes encourage it.”

Hill linked that systemic imbalance with what she sees as a troubling vein of jurisprudence whose repercussions extend beyond the dangers women face from sexual abuse.

“In addition to all of the positive things that were going on in 1991,” she said, citing policies implemented to protect women from sexual misconduct in the workplace, “there were other systems that were put into place to undermine our rights … [like] nondisclosure agreements and forced arbitration.

“The rise of those tactics and structures occurred during the 1990s,” she observed. The use of nondisclosure agreements (NDAs)—which often include noncompete clauses limiting employees’ ability to work for other companies—“went from like 2 percent in 1991 to now about 50 percent of contracts,” Hill said. (The prevalence of NDAs has surfaced in cases ranging from Harvey Weinstein’s sexual coercion of actresses to Amazon’s use of them for warehouse workers. In October, the Financial Times reported on a $3.4 billion global real estate firm Cushman & Wakefield suing one of its janitors for taking a cleaning job with another company—and a judicial ruling in Cushman’s favor.)

“With forced arbitration, the same thing happened, especially for nonunion employees. And the Supreme Court is sanctioning this,” Hill concluded. “So these structures become part of the system that undermine the protection of civil rights of all kinds. I say to people, maybe you’re not concerned about sexual harassment or sexual assault, but there is a civil right that you probably are concerned about, and these structures do not discriminate.” —TP