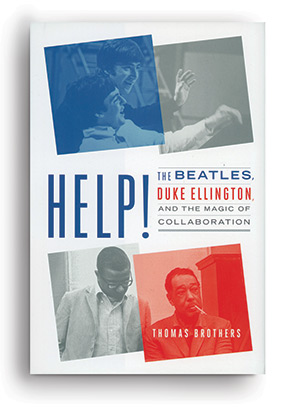 The Duke Ellington Orchestra endured its share of minor indignities during an unparalleled half-century of music-making. One in particular begs revisiting here. In late February of 1970, the band went on The Ed Sullivan Show as part of a full-scale salute to the Beatles.

To view this footage today is to behold an era in awkward transition. Miming their prerecorded parts on a pastel psychedelic set, Ellington’s band members seem hopelessly outmoded, and faintly absurd—as does the Maestro himself, a 70-year-old American eminence in a tomato-colored dinner jacket, compelled to force a grin as he plunks out “She Loves You” on a Steinway grand.

There’s no mention of this fleeting point of contact in HELP! The Beatles, Duke Ellington, and the Magic of Collaboration; Thomas Brothers C’79 has his sights set on deeper, more formative connections. And he has a thesis, about “relationships designed to promote collective creativity,” that feels reasonable and persuasive, if also a bit on the nose. In our current cultural moment, when “collaboration” is a buzzword in business and tech, here’s a book extolling it as the special sauce behind two of recorded music’s most iconic properties.

Brothers, a professor of music at Duke University, is also the author of two excellent studies of pioneering jazz trumpeter and vocalist Louis Armstrong—the second of which, Louis Armstrong: Master of Modernism, was a finalist for the 2015 Pulitzer Prize in Biography [“Arts,” Jul|Aug 2014].

There are few implicit connections to make between Duke Ellington and the Beatles, unless you begin with the African American musical tradition they share as a bedrock influence. Brothers takes precisely this approach, opening HELP! by citing 19th-century scholarship on the ring shout, a West African custom carried abroad by the slave trade. “The communal tradition reached Ellington and the Beatles, and each group did something special with it,” he affirms. “One could say that they each brought a composer’s vision to the dynamics of collaboration.”

Like many Americans of his generation, Brothers became a Beatles fan after seeing one of their epochal appearances on The Ed Sullivan Show. He hasn’t lost that spark of enthusiasm, as his treatment of the Fab Four attests. The band’s key creative partnership, between John Lennon and Paul McCartney, provides him with terrific material: an odd couple, a simmering rivalry, a partnership whose mysteries lurk in plain sight.

Writing about the Beatles’ custom of stamping songs with a catchall Lennon–McCartney credit, Brothers observes: “Collaboration was not only visible and audible, it was inscribed.” He does a fine job of putting the evidence under the microscope, isolating strands of musical DNA and showing how each songwriter lifted or prodded the other to greater results.

His treatment of cultural forces swirling in the background—like the coded signifiers that marked the early Beatles as a “hi-fi” commercial act even as they served up rhythm and blues—is equally astute. And anyone who has ever been captivated by the trippy tapestry of later albums like Revolver should encounter Brothers’s near-forensic analysis: he zooms in on a familiar detail (like McCartney’s tape loops on “Tomorrow Never Knows,” inspired by German composer Karlheinz Stockhausen) to illustrate a larger point about the push-pull of influences in the band.

Brothers strives not to show his hand, but he obviously has a favorite Beatle, and it isn’t John. McCartney’s sophisticated ear and gift for synthesis suggest a superior musical mind, though it took Lennon’s poetical, ineffable cool to create the rare alchemy in their songs. HELP! is a paean to team effort, but its telling puts McCartney firmly at the front of the pack; at times, Brothers seems to be pushing back against an idealized image of Lennon that arose after his tragic death.

This hint of a corrective is a subtle undercurrent in the Beatles half of the book. Where Duke is concerned, Brothers has a much bigger axe to grind. He takes issue with Ellington’s aura of composerly genius, when so many of the indelible themes in his canon were coauthored by, or appropriated from, associates on payroll—like Bubber Miley, Juan Tizol, and especially Billy Strayhorn. “The intention here is not to arrive at moral judgment,” Brothers insists, “but rather to bring to light the quotidian realities of how the Ellington collective accomplished what it did.”

Yet his argument lays out an implicit moral judgment that’s impossible to ignore. Brothers paints Ellington as an inauthentic hustler—a failed composer whose true genius was in cajoling, “compiling,” and self-promotion. This is an ungenerous and troubling depiction even in light of the facts Brothers lays out for inspection. It’s no secret that Ellington repurposed melodic ideas from his band members, often without proper attribution. It’s also true that the music industry, from the record company to the publicists to the critics, willfully advanced a “Great Man” ideal. Brothers, in his push to explicate “the Ellington collective”—a wishful term for a frankly hierarchical band—swings the pendulum hard in the other direction.

Strayhorn’s outsize role in the Ellington band was expertly told in a 1996 biography by David Hajdu. Here he’s hailed as the wizard behind the curtain, lulled into compliance by the security and stature of the gig. The problem with this take is that Ellington openly acknowledged Strayhorn as an essential and roughly equal partner. “He was not, as he was often referred to by many, my alter ego,” Duke wrote in his memoir. “Billy Strayhorn was my right arm, my left arm, all the eyes in the back of my head, my brainwaves in his head, and his in mine.”

That sounds a lot like the “the magic of collaboration,” even if Ellington reaped the greater reward. Brothers, who brings so much insight to HELP!, should have seen this problem: How can exploitation be a part of true collaborative practice? With his sharp critique of Ellington’s methods and mythology, he ends up undermining his own idea.

Nate Chinen C’97 is a music writer whose work has appeared in the New York Times, Downbeat, JazzTimes, and other publications.