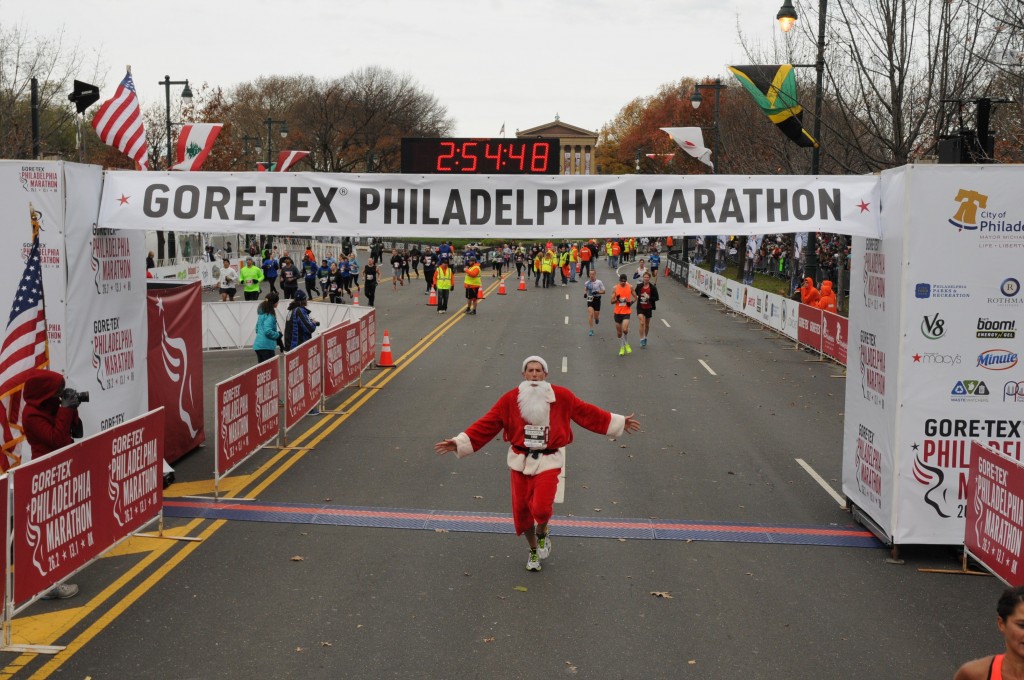 Brian Lang C’08 didn’t have any grand plans when he first bought a Santa Claus suit a few years ago. The jolly Penn grad only got it because he loves Christmas and, he says, “I think it’s something that everyone should have.” Maybe he would wear it for his family or at office parties at Gap International, the global performance consulting company in Springfield, Pa. where he’s worked since graduating from Penn.

But one day, the former Quaker track athlete looked at the bulky red outfit, complete with a hat and fake white beard, and had an offbeat thought: I wonder how far I can run in this thing?

The next thing he knew he was out in Center City, running through the streets of Philly as Santa, getting through about four or five miles, but, more importantly, seeing a whole lot of smiles from adults and children alike.

“There were little kids going, ‘Hi Santa Claus,’ and that makes your day,” Lang recalled. “Even though you feel ridiculous, you don’t feel as ridiculous because you’re doing it for a good cause.”

Not long after that, Lang had another thought. Figuring he could make his cause even better by raising money for charity (more on that later), he checked online to see if there were any records for runners dressed in Santa. Sure enough, he discovered there was a Guinness World Record for the fastest marathon run by a Santa — at a very brisk 2:55.50.

Suddenly, Lang had a new goal, targeting the 2015 Philadelphia Marathon. And he became driven to cross the finish line as a record-holder after having a mostly disappointing college track career that was derailed by injuries.

“Running got kind of stale for me,” he admitted. “This was a way to reinvigorate me.” 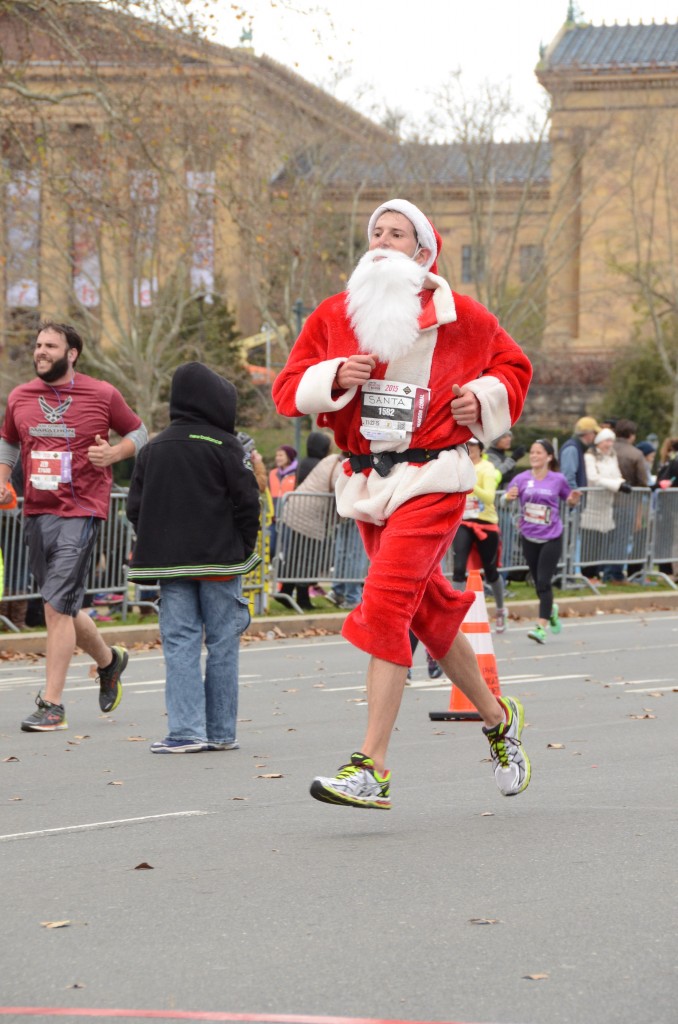 But how do you train for something like this? Lang had run marathons before but, like many, he prefers as little clothing as possible for long-distance runs. So after first getting in shape, he then began to go out for long runs in sweatpants and sweatshirts. It was only about a month before the race when he went into a Planet Fitness and asked the befuddled gym staff if he could run on a treadmill in his Santa suit. They agreed and even took pictures for him as he ground his way through 13 miles in a 70-degree gym. (Many other gym patrons whipped out their phones to take photos too with Lang saying he became a “Twitter and Snapchat phenomenon that day.”)

“There’s no road map for how this training was supposed to go,” he laughed. “So I had to make it up.”

After a successful tuneup at the Philadelphia Rock ‘n’ Roll Half Marathon on Halloween, Lang felt like he was ready to break the record at the Philadelphia Marathon on Nov. 22. And because of some pre-race publicity, he got even more love on the course that he was expecting with people yelling, “Go get the record, Santa!” and many others quoting lines from the Will Ferell movie Elf (“Santa, I know him!”). At boathouse row, a band played the song “Here comes Santa Claus” as he passed.

“I actually felt bad for anyone running next to me because they didn’t get any love,” he said. “It was all about Santa.”

Despite the positive vibes, though, he wasn’t sure if he’d break the record that day. It was a little bit warmer out than he hoped and there was some heavy wind to boot. During the stretch of the marathon in Manayunk, he felt his suit acting “like a sail to everyone behind me,” and other runners didn’t follow the normal etiquette of trading the lead so he could draft off them. “They were content,” Lang said, “to have jolly old St. Nick lead them through.”

Lang later admitted that he felt tired from the fourth mile on and was a few seconds slow of the pace he had set through the first half of the 26.2-mile race. But determined to break the record — in large part so he wouldn’t have to do it again — Lang saved his best for last with his final 5K actually faster than all of his other 5Ks.

He ended up crossing the finish line with a time of 2:54.02, breaking the previous record — which had been held by someone in England who also holds the fastest marathon by someone dressed as a water bottle — by almost two minutes. He then found his family — they were easy to spot because they were wearing Santa hats — and celebrated an accomplishment he never could have imagined. 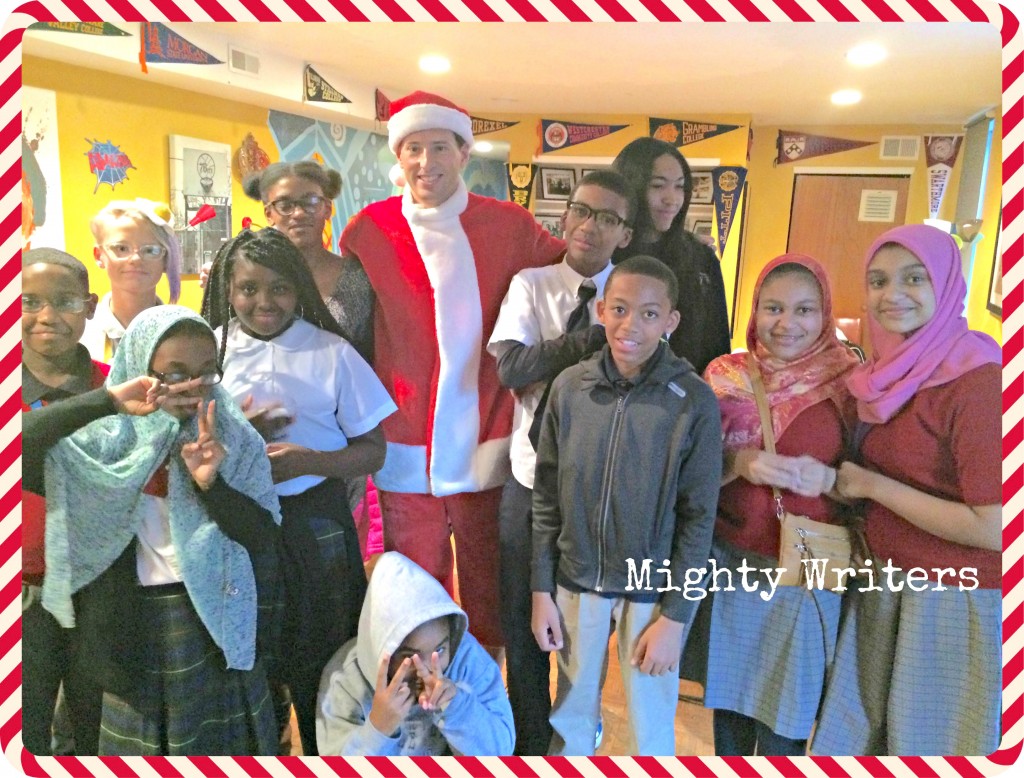 Perhaps most importantly, the race helped him raise nearly $4,000 for Mighty Writers, a charity he chose for three reasons: it’s based in Philadelphia, where he lives; it helps children (probably many of who love Santa) and combats the city’s literacy problem; and it’s a smaller organization where his contribution can make a difference.

He now hopes to push that total above $5,000 by the end of the year. And you can probably guess how he plans to do that.

“What’s next is Christmas,” the Santa record-holder said. “And that means I’ve got some running to do around the city.”

You can make a donation at MarathonSanta.org and follow him on Twitter to keep up with his latest exploits.