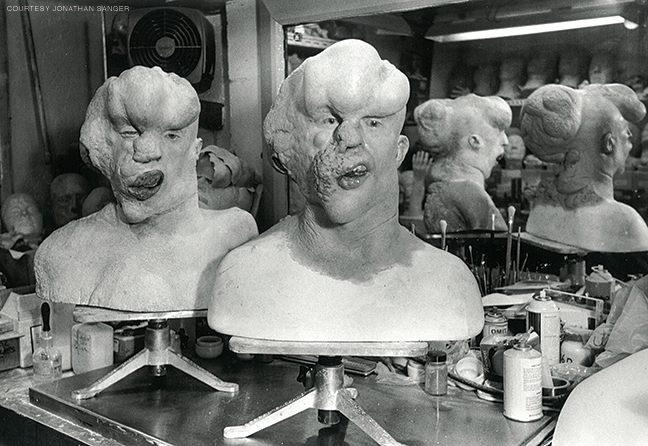 Two weeks before filming was set to begin for The Elephant Man in London, John Hurt finally tried on the prosthetic makeup that director David Lynch had spent months crafting for him. Designed to transform the actor into the hideously deformed Victorian carnival attraction (and gentleman) John Merrick, it looked convincingly realistic on its own. But it was unacceptably rigid on a human face.

Disaster loomed. Finding a makeup artist who could rescue the project looked impossible, since the shooting schedule was already tight and co-star Anthony Hopkins had a “stop-date” in his contract that meant he would leave in January 1980 to shoot another film.

Years later, Lynch told Jonathan Sanger C’65 ASC’67: “The day after I realized that the makeup was not going to work, I bought a ticket. I was ready to leave—to go home.” He later called that experience “one of the darkest times of my life.” But he stayed.

Sanger’s next move was to call executive producer Mel Brooks, whose company was financing the independent film. Though the comedian could be a very tough businessman, he calmed the project’s suddenly roiling waters.

“Let me know who you get, and don’t let David be discouraged,” he told Sanger. “You’ll work it out.”

They soon located an experienced makeup artist who told them he would need at least six weeks to prepare the makeup (“an eternity in a film schedule,” Sanger fretted) and drove a hard financial bargain. But now they could proceed by postponing scenes with Hurt in full makeup till later—which in Sanger’s view ultimately made for a better, more restrained movie.

That crisis and its frantic resolution are among the many meaty stories Sanger recounts in Making The Elephant Man: A Producer’s Memoir (McFarland, 2016), which chronicles the experience of his first movie as a producer.

One reason to tell the story now, more than three decades after the film was released, was to leave a detailed record for film students. (Sanger has taught independent filmmaking at various schools.) But the real impetus was the powerful story of the process that led to a serious work of art.

“I could have done something that was more of a textbook about how one goes about making a movie,” Sanger says in an interview. “But I thought there was a human story beyond just that. I wanted it to be more of a general-audience book that would take people through the journey that I went through.”

That journey featured quite a cast of characters, from Lynch (then a little-known director whose indie film Eraserhead had fascinated Sanger) to the moody, recovering-alcoholic Hopkins (who played the London physician Frederick Treves) to Brooks, who loved the project from the get-go and supported Sanger through thick and thin. (Brooks once described Lynch as “just like Jimmy Stewart, if Jimmy Stewart had been born on the planet Venus.”)

Though Sanger had worked as an assistant director on several films, including Brooks’s High Anxiety, his goal by the summer of 1978 was to produce movies. After his babysitter asked him to look at a script co-written by her boyfriend (Christopher DeVore), Sanger read it in a sitting. By the end he was weeping. “It was “exactly the kind of story I would want to make,” he writes, “a historical biography about a wretched soul who had nonetheless lived an extraordinary life.”

Balancing his passion for storytelling was a sharp, pragmatic approach to problem-solving, and the discussions of the distribution and hiring decisions he and his team had to make are surprisingly lively.

Sanger has produced plenty of movies since then, from the indie Frances to big-studio productions like Vanilla Sky, and he has some more up his sleeve as well. He’s excited about his latest film, about Supreme Court Justice Thurgood Marshall in his early years as a lawyer for the NAACP. Titled Marshall, it comes out October 13. And in many ways the process of making it reminded him of that first independent film.

“A lot of the experiences that I had when I made Elephant Man, I’ve not had in the same way until this experience [Marshall]. So I do think that a lot of the things that happened on Elephant Man could happen today for somebody starting out, because independent films are really where the better stories are being told anyway.”

For all the talent, vision, and persistence needed to make a successful film, Sanger is quick to acknowledge the role of chance.

“There is always luck involved. And if you think it’s always going to be there, you will be surprised if you let it go and don’t take advantage of it. I found in my own case that when I did take advantage of it, great things happened. And when I didn’t, it took a long time for it to come around again.