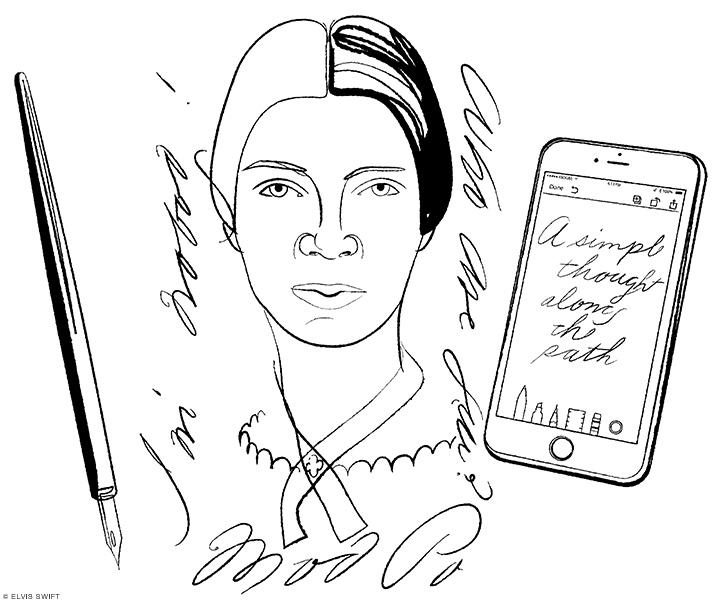 The next 10-week session of ModPo begins September 9, but new students may enroll at any time. Visit writing.upenn.edu/wh/modpo/gazette.

When Massive Open Online Courses (MOOCs) began springing up early this decade, Al Filreis recalls, the question on many minds was: “Is this going to be some kind of neoliberal attempt to circumvent credentialed universities by offering Mickey Mouse crapola?” He answers his own somewhat rhetorical question: “Of course not.”

Filreis, the Kelly Professor of English and faculty director of the Kelly Writers House, speaks with authority. His wildly successful contribution to the MOOC genre, Modern and Contemporary American Poetry (ModPo), starts its sixth year this month. The course probes the verse of Emily Dickinson, William Carlos Williams M1906 Hon’52, Gertrude Stein, and other poets.

At the start of its first year, 42,000 people enrolled. Some sample reviews:

• “I have an MA in English literature [and] this is possibly the best course I have ever taken whether online or at a university.”

• “[This is] my third year immersed in [the] ModPo experience, and it has been transformative for my poetry and my life.”

• “ModPo should be the standard that all MOOCs follow. It has the feel of a real college experience …”

Filreis doesn’t lecture in ModPo. That would be a problem for most MOOCs, which are structured around pre-recorded lectures and multiple-choice quizzes. But his classes, on- and offline, turn pedagogy on its head by bringing students and teachers together to ask questions of each other. “I believe that humanities and arts have to be about co-creation, teacher-learner relationships that are iterative and circular,” he says. Most MOOCs “seem to militate against that.”

To be successful, he and his team drove platform provider Coursera towards certain innovations, he explains. “I insisted on the centrality of the discussion forums, which the founders of Coursera originally assumed would be places where you could ask questions like, ‘I don’t understand Problem Two,’ not ‘What do you think the meaning of life is? Please reply.’”

There are quizzes, but they’re not required. The same goes for essays. Students read a poem, listen to it being performed, and then choose from a buffet of ways to interact with it and each other. Some may watch a video of Filreis and a group of students doing a close reading of the poem. Others tune in for the weekly live broadcasts from the Writers House—some even make a pilgrimage to the cozy cottage to participate in person. There are online discussion forums, meet-ups in every part of the country, and virtual office hours, when students can connect personally with Filreis and teaching assistants. This year, the ModPo team is traveling to London to film a weekly video and meet some ModPo groupies. More than 100 people had RSVPed by mid-July.

“I feel like we’ve built so much more than a Coursera course,” says Anna Strong C’13, one of the original TAs and now a course coordinator. “We’ve built a community of people and provided a space, both digital and physical, for that community to talk and learn.”

Though they’ve added a few TAs along the way, the “core group has remained,” she notes, despite the fact that they’re now scattered across the country. That cohesion and continuity, she says, is a “huge part of ModPo’s continued success.”

Unlike most MOOCs, which rely on their platform providers to handle the technical troubleshooting, the Writers House has its own personnel for that work.

“There are so many idiosyncrasies in the way we run ModPo that we’re often the best ones equipped to help our students,” says Zach Carduner C’13, a member of the ModPo tech team. One of his main duties this summer was coordinating volunteer translators to add non-English subtitles to videos. The first video on Emily Dickinson is now available in French, Chinese, and Arabic.

“ModPo is one of the coolest projects I get to work on,” says Chris Martin C’06, the Writers House IT manager. “We literally connect with avid learners from all across the world and make a difference in their lives.”

Poetry can change the way people view and listen to the world around them. But for someone new to the genre, some verses can be daunting in their complexity. Dissecting a poem in a group setting and hearing others’ perspectives can crack open new levels of understanding—for students and professors.

Even after 32 years of teaching English 88 (the Penn course on which ModPo is based), Filreis says he is still discovering new aspects of certain poems. He cites “In a Restless World Like This Is,” written by Charles Bernstein, the Donald T. Regan Professor of English and Comparative Literature; it’s about being in Manhattan on 9/11 and feeling that even the most stable ground is crumbling. Having recently taught that poem to Penn students too young to have any real personal experience with 9/11, Filreis says: “It was only when I taught the poem in ModPo that people reacted with stories about, not just 9/11, but any kind of catastrophe that makes you wonder whether we’re standing on firm ground. They were beautiful, really powerful responses.

“I’ve never taught that poem as well as I did in ModPo,” he adds. “And I don’t think I’ve ever understood it as well, either, because most of these people are adults.”

For those who worry that MOOCs may lure potential students away from universities, Filreis notes that ModPo students are usually older than undergraduates, and many are from other countries—51 percent live outside of North America. “They have no access to Penn, and they’re not coming anyway. This gives them access, and on the contrary, makes them interested in Penn.”

One student with profound autism wasn’t ready for a college classroom, yet became “a kind of superstar in ModPo,” he says. Another was a “feisty, lively woman in Gaza who didn’t have access to this kind of teaching and fellowship.” More than a few students are, for various reasons, home-bound. One woman from western Canada had to pause her studies when her husband became ill. The following year, she resumed with Week Five and finished the course. Yet technically, she is among the 95 percent of students considered “incomplete” by Coursera.

“Now, did she complete the course?” Filreis asks. “You tell me. She’s been in the course for six years.”

It’s not unusual for students to repeat ModPo year after year. In fact, three parallel syllabi form a sort of underground labyrinth that keeps ModPo fresh: ModPo Plus (supplemental material for those who have already taken the first course); Community Collaborative Close Readings (videos made by people around the world in their ModPo meet-ups); and the Teacher Resource Center (for scholars teaching these poems to other students).

Filreis explains the Teacher Resource Center: “Let’s say there is a really difficult Langston Hughes poem—it’s difficult because it addresses race. And let’s say you’re a white teacher in a classroom that’s mostly students of color, and you think, ‘I don’t know how to teach this. How do I not seem condescending?’ We have a video that talks about that very issue.”

The ModPo team also tweets, blogs, and maintains the discussion forums year-round, even when class is not in session, a period referred to as “SloPo.” It’s another reason why students keep coming back.

“Massive Open Online Courses need not be impersonal,” Filreis says. “And I hope you quote me on that.”