A Wordslinger Takes on a Gunslinger—and Other Cultural Pursuits

Class of ’64 | Dan Rottenberg C’64 first met Joseph Alfred “Jack” Slade more than half a century ago in a children’s book, The Pony Express, by Samuel Hopkins Adams. He was nine years old then, and he would spend the next 57 years—parts of them, anyway—bringing to life a biography, Death of a Gunfighter: The Quest for Jack Slade, the West’s Most Elusive Legend, which was published in 2008 and issued in paperback this past April.

“I wrote my first draft chapter at about age 11,” Rottenberg recalls, “and composed a few more while I was at Penn—all of them subsequently discarded in the face of new findings.” In the book’s preface he explains that he had found himself “instinctively drawn to this unstable roughneck who, when handed a seemingly impossible assignment, fulfilled it beyond anyone’s wildest expectations.”

The fact that it took him more than half a century to complete his biography of Slade has a lot to do with the changing nature of his livelihood, the written word.

“Out West in the 1850s and ’60s, there were no newspapers or records, but there was word of mouth and that was downright exaggerated and wrong,” says Rottenberg. “It was a lot of work finding sources, corroborating stories, and checking facts. Had computers and the Internet not come along, I never could have completed the book. It enabled me to assemble a virtual advisory board. Had I been tackling this by the US Mail it would have been like using the Pony Express.”

Although Slade kept the stagecoaches and the mail running and helped launch the Pony Express—all of which kept California in the Union—he is remembered mainly as a savage gunslinger lynched by vigilantes. While conceding that Slade was prone to drunken rampages, Rottenberg maintains that he was turned into a “vicious killer and mythological character by Mark Twain when, in fact, he was a minor hero.

“I see his story almost as a Greek tragedy, and I wanted to set the record straight because he was an important 19th-century figure,” explains Rottenberg. The hardbound edition won the Wild West History Association’s award for Best Western History Book of 2008. (The publisher, Westholme Publishing, was founded by former Penn Press publicist Bruce Franklin, who did the publicity for Rottenberg’s 2001 book, The Man Who Made Wall Street: Anthony J. Drexel and the Rise of Modern Finance.)

Rottenberg wasn’t exactly idle during that 57-year gestation period. Having chosen Penn because his father, Herman C’36, “loved Penn and played clarinet in the Penn band,” he majored in American civilization, met and married his wife (Barbara Rubin CW’64), and served as sports editor of The Daily Pennsylvanian. After four years at a daily newspaper in Portland, Indiana, he moved to Chicago, where he worked as a reporter for The Wall Street Journal and then as managing editor of the Chicago Journalism Review.

Returning to Philadelphia in 1972 to be the executive editor of Philadelphia magazine, Rottenberg—whose red hair complements his contrarian opinions—has been a vivid presence in the city ever since.

Looking back, he suggests that his most impressive accomplishment was editing the Welcomat, the free weekly opinion paper that he took over in 1981.

“My idea was to give articulate people a forum, and if they had one, they’d come out of the woodwork,” he says. “It largely consisted of unsolicited submissions and was inspired by the Letters section of The Pennsylvania Gazette, where you had page after page of articulate and intelligent people debating whatever subjects concerned them.”

Rottenberg also did his share of writing for the Welcomat, and between that and The Philadelphia Inquirer op-ed column he wrote for 17 years, he angered more than a few of his targets. “If I wasn’t a public figure,” said former Mayor Frank Rizzo, “I’d rather make him eat a bundle of those articles covered with ketchup or mustard or whatever he likes.”

“I am temperamentally a devil’s advocate,” Rottenberg concedes. “I’ve been sued for libel seven times and won all seven cases.” His personal website, www.danrottenberg.com, lists many other accomplishments. Though he doesn’t deny that he’s ambitious, he insists that he doesn’t lust after fame, fortune, or power.

“I seek education, community, and immortality,” he says. “Most of my writing projects create some sort of community. And most of my books, I like to think, will be of value long after I’m gone, even if they’re not best-sellers.”

Of the 10 books he has penned, Rottenberg believes that Finding Our Fathers (Random House, 1977) was a true groundbreaker in that it launched the Jewish genealogy movement. He himself has deep Jewish roots, being a descendent of Rabbi Meir of Rothenburg, a revered 13th-century German free thinker.

“My grandfather, Marc, became a disciple of Mordecai Kaplan, founder of Reconstructionism, the notion that Judaism is not so much a religion as a civilization that has constantly been ‘reconstructed,’” he says. “My relatives taught me that great ideas do not begin as a minority of one. They often occur simultaneously to many people in isolation, but the ideas perish unless a community connects such people.”

Rottenberg’s latest community endeavor is the Broad Street Review, an eclectic online arts forum based in Philadelphia that he launched four years ago with the University of the Arts.

“In my 60s, I’ve become a believer in the Internet,” he says. “We have 25,000 viewers a month from 77 countries on six continents. Circulation grows not only by word of mouth but also by social networks like Twitter and Facebook. My budget is only $75,000 a year, which is remarkable, but then we don’t have printing or distribution costs.”

Rottenberg created Broadstreetreview.com partly to have a highbrow site for grown-ups and partly to avail himself of the riches of Philadelphia. Twice weekly he posts unsolicited letters and articles on plays, concerts, art shows, and movies.

When college students tell him they won’t seek a career in journalism because newspapers are dying, he responds that “there will always be opportunities in journalism.” After all, he began his career thinking that he’d spend his whole career working on dailies. “Instead, apart from the first six years, I spent the rest of my career in magazines, alternative weeklies, books, and now the Internet. Some of those forms of journalism didn’t even exist when I was at Penn.”

At press time, Rottenberg had five more books on the back burner. One is a memoir about growing up on the Upper West Side of New York during the post-war years. Beyond that, he can’t speculate.

“I’ve learned not to plan my future,” he says. “The variety of opportunities I’ve had in real life has far exceeded my wildest youthful fantasies.” 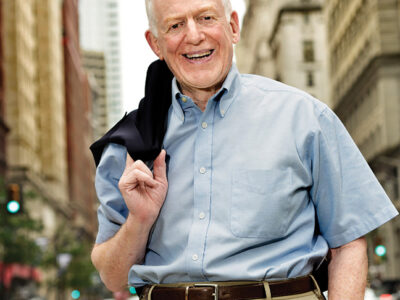