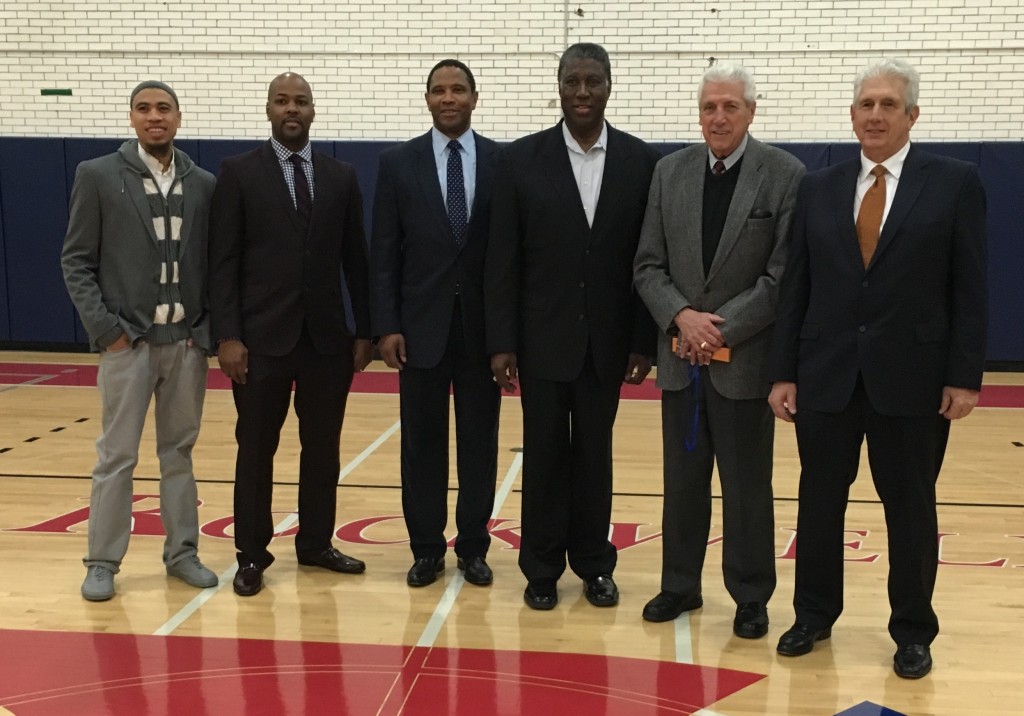 They all returned to Penn to help the Big 5 celebrate its 60th anniversary, each representing a decade of basketball and getting honored on the Palestra floor during media timeouts of a rare hoops doubleheader.

And all of them — Ernie Beck W’53, Stan Pawlak C’66, Corky Calhoun W’72, Paul Little W’83, Ira Bowman W’96 and Ibrahim Jaaber C’07 — have made a lasting impact on not only their alma mater but the city’s storied basketball tradition.

Beck, who still looks like he can play at 85, was a part of a group of legends that represented the 1950s — although Beck was quick to point out that he played at Penn before the Big 5 was officially formed and that he only played one game against a city opponent (La Salle).

That wasn’t the only thing that was different back then.

“I go way back,” said Beck, who’s been Penn’s all-time leading scorer (1,821 points) for more than 60 years even though he only played three seasons on varsity (freshmen had their own teams then). “I tell people I go back before the three-point play, you didn’t have a shot clock, the lane was small, you didn’t have a collapsible rim.”

But while the game has changed, one thing never has: his love for his school and the sport. Beck said he still returns to Penn often — Wednesday’s game was the third one he’s seen live this season — and that he plans to do so for as long as he’s able.

“This is my home in a sense,” he said of the Palestra.

Pawlak remembers watching Beck play at Camden’s Convention Hall when he was a boy. Soon enough, he was following Beck into the record books as another dominant scorer (he tallied 1,501 points in three seasons) who led Penn to an Ivy League championship as a senior.

And many years later, Pawlak was thrilled to be in the company of Pawlak and other Quaker stars like Calhoun, Penn’s representative for the 1970s.

“I picked a good decade to play in, let’s put it that way,” laughed Pawlak, who still calls Penn games on the radio.

Pawlak may be slightly short-changing his own teams, which had some memorable wins, including a 13-point rout of a strong Villanova team in what Pawlak called “a great moment” during the 1965-66 season.

But it’s true that no one has ever matched the run of Calhoun, who lost only six games in his college career and one in the official Big 5 round robin series. Even still, when asked about his Big 5 memories, Calhoun talked about the brutal loss to Villanova in the NCAA tournament that famously ended Penn’s perfect season. 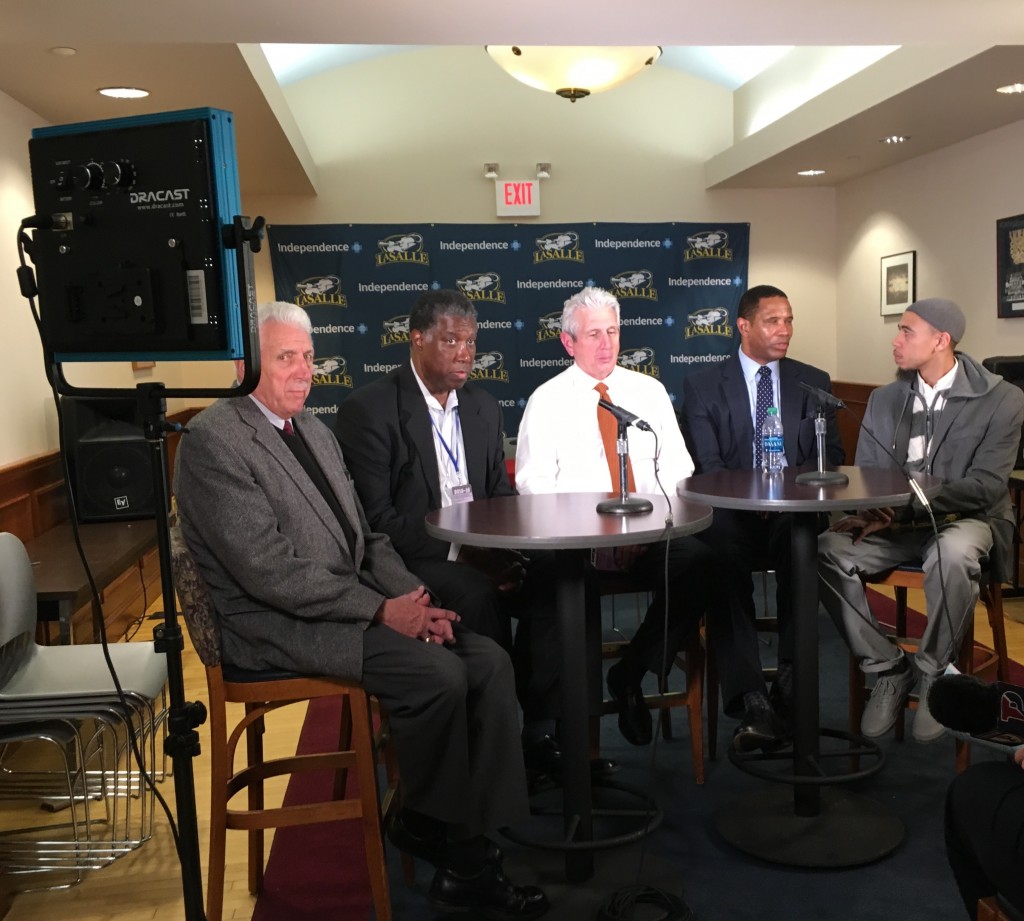 All of the Penn honorees (except Ira Bowman, who was busy coaching) do a live TV segment during halftime of the Penn-St. Joe’s game.

Coming from the Boston area, Little said he didn’t know much about the Big 5 until getting to college. But when he was getting recruited, he said the Penn coaches sold him on guys like Beck, Pawlak, Calhoun and of course the players on the 1979 Final Four team.

“Legends,” said Little, who had a nice career himself with 1,116 career points and three Ivy League titles. “Absolute legends. It’s actually one of the reasons I came to Penn.”

When asked what his best Big 5 moment was, Little immediately recounted Penn’s 84-80 win over a Villanova team that was ranked 10th in the country early in the 1982-83 season — a win, he noted, that was even more special because the Penn players and ’Nova players knew each other so well from summer pickup games.

“That made it particularly sweet,” he said.

That, of course, is a common thread in the Big 5, where the connections between players, past and present, remain deep. Like Little, Bowman didn’t really understand that until transferring to Penn from Providence and getting debriefed by star teammates Jerome Allen W’09 and Matt Maloney C’95.

“They forced the Penn history on you and made you recognize how lucky you are and what a privilege it was to play in this place and how many great players have come before,” said Bowman, who’s currently the team’s assistant coach. “That’s part of the honor to put that jersey on and to play at the Palestra — to understand how many people have paved the way before you.”

Bowman was in the middle of a team huddle when the 1990s stars were called out so he didn’t make it out onto the court. Earlier, he said he wanted to keep the focus on the current players because “my time has come and gone.”

He still got some huge cheers from the Penn fans, though. So did Jaaber, one of the most electrifying players in recent memory.

The star guard not only led the Quakers to their last three Ivy League titles (from 2005 to 2007) but left school as the program’s all-time steals leader — with nearly twice as much as anyone else ever. He also currently ranks seventh all-time in scoring with 1,518 points — 17 ahead of Pawlak.

“I only knew some of them by name and from the record brooks, trying to break people’s records,” Jaaber said of meeting Penn greats from other decades. “But it’s an honor to be listed among such great players. I’m really humbled and I don’t know if I actually belong on the list with them.”

He certainly belongs. On top of helping the Quakers to three straight Ivy crowns, he also enjoyed plenty of memorable moments in the Big 5, scoring 27 points and dishing nine assists in a 93-92 win at La Salle in 2007 less than a week before spoiling his former coach Fran Dunphy’s return to the Palestra.

“That was an epic matchup that come to the wire,” he said of Penn’s 76-74 win over Temple. “And La Salle was probably my best individual showing. I think it was a milestone in terms of my confidence as a player and just my vision about college basketball.”

That’s the thing about Big 5 games — they remain etched in players’ memories even long after they graduate. But while each Penn alum in attendance Wednesday had their own separate memories, they were all bound together by the Palestra. And, perhaps more than anything else, what it meant to follow each other and wait for the next stars to come through the Penn basketball program.

“I remember all of these guys fondly,” Calhoun said, glancing around the room, just before Wednesday’s festivities began. “We’re all part of a big special family.” 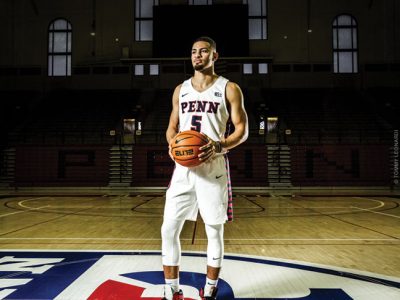