Year of the “Cardiac Quakers”

By Dave Zeitlin | After getting blown out by eight goals to Cornell in late March, the Penn men’s lacrosse team could have done the easy thing and try to forget about the game—to, as the sport cliché goes, simply turn the page and move on.

But the Quakers decided on the opposite approach instead.

Inspired by an idea from junior midfielder Joe McCallion during a players-only meeting, head coach Mike Murphy plastered pictures of the 17-9 final score from the Cornell game in everyone’s locker. Then, before Penn met Cornell again in the first round of the Ivy League Tournament, Murphy blew up a huge poster of the “17-9” scoreboard to adorn the locker room wall.

“It was a constant reminder,” said junior defender Matt McMahon, “that no matter how good we think we are, we still got spanked by Cornell earlier in the season.”

Whether motivated or humbled by the locker room decorations, Penn won its final six games of the regular season, knocked off Cornell and Harvard in the Ivy League Tournament in dramatic fashion, and earned the program’s first NCAA tournament home game since 1988.

In other words, the Quakers did more than just salvage their season following the ugly loss to Cornell that dropped their record to 3-3; they pulled off one of the most remarkable turnarounds in program history.

“We were in a hole at 3-3, and we all kind of decided this wasn’t the way it was going to go down,” McMahon said. “Nobody really stood up there and lectured the rest of the team. It was just everybody coming in and looking at where we were, and knowing it wasn’t where we were supposed to be … From there, we turned it on.”

Penn had played so well to get to the NCAA tournament, having ascended to a No. 9 national ranking, that McMahon felt the team was poised to make a serious run at the NCAA Final Four.

But standing in the Quakers’ way was a team they had only played twice in the regular season since 1994 but one they still knew well from scrimmages: neighborhood rival Drexel. To the surprise of many, Penn and Drexel were paired against each other in the first round of the NCAA tournament—which provided the city with a lacrosse showcase that packed more fans into Franklin Field than anyone at Penn had ever seen for a lacrosse game.

That was the fun part. The not-so-fun part was the Dragons scoring three goals in 11 seconds toward the end of the first half, an incredible feat that helped them end the Quakers’ season with a surprisingly lopsided 16-11 win.

After the game, Murphy pointed to the wild 11-second flurry as the definitive turning point and admitted that his players hadn’t been at their sharpest all afternoon. But then he quickly put the 2014 season into perspective.

“I’m very proud of our seniors,” the Penn coach said. “I feel like they left Penn lacrosse much better than they found it. And they should feel good about that and try not to focus on how it ended.”

Focusing on the Ivy League tournament would certainly be a far more uplifting exercise for the Penn players.

In the semifinals, the Quakers trailed Cornell by three goals heading into the fourth quarter, before senior midfielder Zack Losko took over with what McMahon called “one of the gutsiest performances I’ve ever seen.” Losko, who was named first team All-Ivy for the second straight year, scored four goals in the final quarter—the last one coming with 49 seconds to go—to lift Penn to a dramatic 11-10 victory.

“That was one of the most unbelievable games I’ve ever played in,” McMahon said, “and definitely one I’ll never forget.”

Two days later, the Quakers didn’t need any last-minute heroics to beat Harvard in the nationally televised Ivy Tournament title game. All they needed was stingy defense to top the Crimson, 7-5, and celebrate on Harvard’s field with the league’s championship trophy.

“It almost felt like it was impossible to lose that game with how far we had come and how much we had been through as a team,” McMahon said. “It didn’t feel like Harvard even had a chance.”

Because of their habit of making unlikely comebacks throughout the season, the appropriately nicknamed “Cardiac Quakers” felt they would still advance in the NCAA tournament even after falling behind Drexel by four goals going into the final quarter.

But, for the first time since they lost to Cornell in March, the Quakers simply couldn’t muster any kind of momentum, missing out on the chance to play Denver—a team the Quakers beat earlier in the season—in the NCAA quarterfinals.

“That’s honestly the most frustrating part of the whole experience,” McMahon said. “We had a fantastic season, we won the Ivy League championship, and we hosted a first-round game, which is something we hadn’t done in a while. But I’m not going to lie. A lot of us have a bitter taste in our mouth because we saw ourselves as a Final Four team.”

Galvanized by that frustration, McMahon and the rest of Penn’s returning players have big goals for the 2015 season, including defending their Ivy League Tournament championship and making a deep run in the NCAA tournament.

Oh, and there’s one more.

“I’ve already talked to Coach about this: I’d love to get [Drexel] on the regular-season schedule next year,” McMahon said. “We have to try to get them back for what they did to us.”

Over the past decade, the Penn women’s lacrosse team has had to overcome a lot of challenges to capture the Ivy League championship trophy year after year. But they’ve never had to deal with anything quite like what happened during the 2014 season.

In an off-the-field incident that made national sports websites, the general manager of the Center City bar Fado accused team members of damaging the bar and engaging in illicit activities during a wild night out. Although, according to head coach Karin Brower Corbett, most of his claims were “not backed by facts,” the negative publicity was still a tough blow for the players—who nevertheless responded by capturing the program’s eighth straight regular-season title, as well as the Ivy League Tournament championship.

“It was something as a coach I’ve never had to deal with,” Brower Corbett said. “And my team, I felt, handled it very well. It was unfortunate, but in the end, what we do as college coaches is we teach life lessons through lacrosse. And I think my team learned a lot about themselves, about leadership, about a number of things.”

The eight consecutive titles is a new record for Ivy League women’s lacrosse teams, breaking the mark held by Harvard (which won seven in a row from 1987-93). The streak also matches a Penn record held by the men’s fencing team, which claimed eight straight league titles from 1975-76 to 1982-83.

But after surging into the record books, the Quakers were far from finished. Following their historic regular-season title, they were faced with the daunting task of going to Princeton for the Ivy League Tournament, marking the first time the four-team playoff to determine the league’s automatic entry to the NCAA tournament was held away from Penn. Even more challenging was the fact that Princeton had easily knocked off Penn, 9-5, on the same field earlier in the season.

But after dispatching Harvard in a double-overtime thriller in the semifinals, the Quakers got their revenge against the Tigers in the finals, cruising to a 9-6 win that ensured them the program’s eighth straight trip to the NCAA tournament.

For Brower Corbett, that win showed how close her team had grown together, as they spent a few days at a Princeton hotel in the midst of finals during the tourney.

“It was a new experience,” the coach said. “You love to have that honor of hosting and being home, but it was nice to be together [on the road]. We studied together. We ate together. For a team that really enjoys being together, it was a fun weekend.”

Before beginning play in the NCAA tournament, Brower Corbett gave a pregame speech that revolved around keeping the season going for as long as possible because of how much everyone enjoyed being together. But after beating Canisius in the first round, the Quakers faced an “unfortunate draw” against Maryland, who handily defeated Penn on its way to winning the national championship.

Still, it was a memorable year for the Quakers, who rallied around a situation that could have easily torn them apart. And with almost everyone returning next year, including a slew of players who missed the 2014 season with injury, Penn now has its sights set on a ninth straight championship. 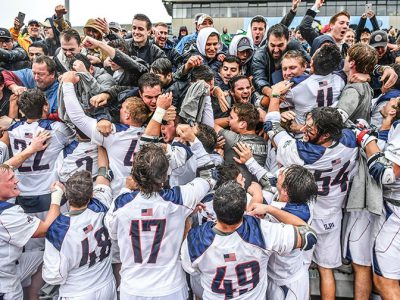