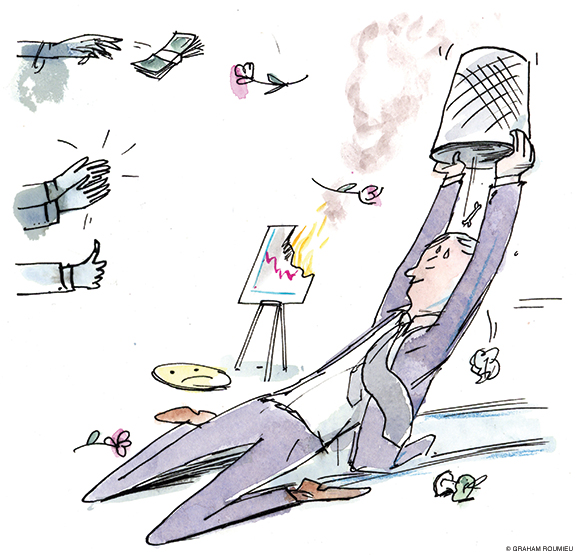 The surprising business advantages of putting your worst foot forward.

By Adam Grant | After having their first child, Rufus Griscom and Alisa Volkman were appalled by the amount of false advertising and bad advice being offered about parenting. They started an online magazine and blog network called Babble to challenge the dominant parenting clichés and tackle the cold, hard truth with humor. In 2009, when Griscom pitched Babble to venture capitalists, he did the exact opposite of what every entrepreneur has been taught to do: he presented a slide listing the top five reasons not to invest in his business.

This should have killed his pitch. Investors are looking for reasons to say yes, and here he was, hand-delivering a list of reasons to say no. Entrepreneurs are supposed to talk about the upsides of their companies, not the downsides. But his counterintuitive approach worked: that year, Babble brought in $3.3 million in funding.

Two years later, Griscom made a sales visit to Disney to see if they might be interested in acquiring Babble. For this pitch, it would logically have been unthinkable to lead with the downsides. It’s one thing to admit that your startup has problems; you can promise to fix the flaws. But when you’re selling an established company, you have every incentive to emphasize the silver linings—and you’re not going to stick around long enough to do anything about the clouds. Strangely, though, Griscom did it again. One of his slides read: “Here’s Why You Should Not Buy Babble.”

Presenting to the family division of digital at Disney, he explained that user engagement, at less than three page views per visit, was lower than expected. Babble was supposed to be a parenting website, but 40 percent of the posts were about celebrities. And the back end of the website was in sore need of retooling.

Disney ended up buying the company for $40 million.

In both situations, Griscom was presenting ideas to people who had more power than he had, and trying to convince them to commit their resources. Most of us assume that to be persuasive, we ought to emphasize our strengths and minimize our weaknesses. That kind of powerful communication makes sense if the audience is supportive. But when you’re pitching a novel idea or speaking up with a suggestion for change, your audience is likely to be skeptical. Investors are looking to poke holes in your arguments; managers are hunting for reasons why your suggestion won’t work. Under those circumstances, for at least four reasons, it’s actually more effective to adopt Griscom’s form of powerless communication by accentuating the flaws in your idea.

The first advantage is that leading with weaknesses disarms the audience. Marketing professors Marian Friestad and Peter Wright find that when we’re aware that someone is trying to persuade us, we naturally raise our mental shields. Rampant confidence is a red flag—a signal that we need to defend ourselves against weapons of influence.

In the early days of Babble, when Griscom presented at the first two board meetings, he talked about everything that was going right with the business, hoping to excite the board about the company’s momentum and potential. “Every time I would say something emphasizing the upside, I would get skeptical responses,” he recalls. “Unbridled optimism comes across as salesmanship; it seems dishonest somehow, and as a consequence it’s met with skepticism. Everyone is allergic to the feeling, or suspicious of being sold.”

At the third meeting of the board, Griscom reversed his approach, opening with a candid discussion of everything that was going wrong with the company and what was keeping him up at night. Although this tactic might be familiar in a debate, it was highly unconventional for an entrepreneur. Board members, though, responded much more favorably than they had in previous meetings, shifting their attention away from self-defense and toward problem solving. Griscom decided to try the same approach with investors, and noticed a similar reaction: they let their guard down. “When I put up a slide that says ‘Here’s why you shouldn’t buy this company,’ the first response was laughter. Then you could see them physically relax. It’s sincere; it doesn’t smell, feel, or look anything like sales. They’re no longer being sold.”

The second benefit of leading with the limitations of an idea is that it makes you look smart. Rufus Griscom first discovered this early in his career, which started in publishing. “There’s nothing more shameful than writing a review that’s too positive,” he learned. Even if reviewers loved a book, they felt an obligation to add a paragraph at the end noting where it fell short. According to Griscom, it’s their way of saying, “I’m not a chump; I was not totally snowed by this author. I am discerning.” When he told investors about the problems with Babble, he demonstrated that he wasn’t snowed by his own ideas or trying to snow them; he was a shrewd judge of his shortcomings. He was smart enough to do his homework and anticipate some of the problems that they would spot.

(As you probably anticipated, this doesn’t work if you’re pitching a bad idea. Stanford psychologist Zak Tormala finds that audiences are more convinced when experts express doubt than certainty, due to the element of surprise. We expect an entrepreneur or a change agent to be certain. When they’re not, we’re intrigued, and we pay more attention to the message—which means we’ll get on board if the idea is compelling.)

The third advantage of being up front about the downsides of your ideas is that it makes you more trustworthy. When Griscom described the hurdles he faced in his own business, he came across not only as knowledgeable, but also as honest and modest. Of course, highlighting weaknesses can backfire if the audience doesn’t already recognize them; it can give them ammunition to shoot down your idea. But Griscom’s audiences were already skeptical, and they were going to find out about many of the problems anyway during due diligence.

A fourth advantage of this approach is that it leaves audiences with a more favorable assessment of the idea itself, due to a bias in how we process information. To illustrate this bias, I often ask executives to judge how happy they are after thinking about the positive features of their lives. One group is tasked with writing three good things about their lives; another group has to list 12 good things. Everyone expects the 12 group to be happier: the more blessings you count, the better you should feel about your circumstances. But most of the time, the opposite is true. We’re happier after we list three good things than twelve. Why would this be?

Psychologist Norbert Schwarz has shown that the easier it is to think of something, the more common and important we assume it is. We use ease of retrieval as information. It’s a cinch for executives to come up with three good things about their lives. They immediately list their love of their children, their spouses, and their jobs. Since it was a breeze to generate a few positives, they infer that their lives are pretty darn good. It’s noticeably harder to name 12 good things about their lives. After covering family and work, executives often mention their friends and then ask if they can count each one separately. Having struggled to come up with a dozen good things, they draw the conclusion that their lives aren’t quite so good after all.

This is what happened to investors when Rufus Griscom cited Babble’s weaknesses. By acknowledging its most serious problems, he made it harder for investors to generate their own ideas about what was wrong with the company. And as they found themselves thinking hard to identify other concerns, they decided Babble’s problems weren’t actually that severe. Griscom saw this happen in the early Babble board meeting when he first tested his upside-down pitch.

“When I led with the factors that could kill the company, the response from the board was the exact opposite: oh, these things aren’t so bad. Newton’s third law can be true in human dynamics as well: every action has an equal and opposite reaction.”

Adam Grant is the Class of 1965 Professor of Management and a professor of psychology. From ORIGINALS: How Non-Conformists Move the World by Adam Grant, published by Viking, an imprint of Penguin Publishing Group, a division of Penguin Random House LLC. Copyright © 2016 by Adam Grant.