By Daniel Garrett and Ivan Ivanov

Environmental, social, and governance (ESG) policies date back to at least 2004 when, upon the request of UN Secretary General Kofi Annan, 18 global financial institutions with total assets exceeding $6 trillion prepared a set of guidelines on integrating certain principles into asset management, security brokerage services, and associated research. The endorsing institutions highlighted ways finance could contribute to sustainable development in a manner that would also increase shareholder value and enhance risk management practices. Today, a large variety of ESG policies proliferate at the world’s largest financial institutions, encompassing issues that range from equitable treatment of workers to carbon-emissions targets.

One such policy implemented by Citigroup in 2018 addressed responsible firearm dealing. In the wake of the 2017 Las Vegas shooting (in which 60 people were killed) and the Stoneman Douglas High shooting in 2018 (in which 17 people were killed), Citigroup announced a policy “to do our part as a company to prevent firearms from getting into the wrong hands.” The three-pronged policy forbids Citigroup clients from (1) manufacturing bump stocks, (2) selling guns to anyone under 21, and (3) selling guns without a background check. Several other banks, including Bank of America and JP Morgan Chase, followed suit with similar policies that year, and in 2019 Goldman Sachs announced that it “doesn’t work with companies that make assault weapons, bump stocks and high-capacity magazines.”

A common thread between these four institutions (plus Fidelity Capital Markets) is that Texas lawmakers passed two laws that effectively barred them from participating in the Texas public finance market on September 1, 2021. Texas used its public finance market to punish banks that may limit credit to industries that are important to the state. The first of these bills, Senate Bill 13, barred banks from Texas public finance markets if the banks discriminate against oil and gas companies in the provision of credit. Senate Bill 19, also named the Firearm Nondiscrimination Act, similarly bans banks with policies restricting credit to firearms-related businesses.

Although many media outlets framed this development as a culture-war skirmish, the financial ramifications are arguably more interesting and consequential. Texas accounts for a large share of the $4 trillion US municipal bond market, which represents money that investors give to state and local borrowers to finance projects such as new school buildings, water system upgrades, roads, and hospitals. For example, Texas governments raise $50 billion in external funds each year—and the total outstanding debt of these governments is roughly $300 billion.

In our new paper, “Gas, Guns, and Governments: Financial Costs of Anti-ESG Policies,” we explore the impact of the anti-ESG laws on the financing costs of state and local governments in Texas.

It was not immediately clear what would happen in the Texas public finance market when institutions had to choose between ESG policies and access to the Texas market. Underwriting data show that Bank of America, Citigroup, Fidelity Capital Markets, Goldman Sachs, and JPMorgan Chase underwrote an average of 35 percent of the bond volume issued in Texas from 2017 through the first half of 2021. Yet on September 1, all five entities abruptly left the Texas market—choosing their ESG policies over the state’s public finance business.

But the banks were not the only ones with the potential to lose out in this situation. An extensive literature on banking competition in public finance shows that, in general, a greater number of competitors helps keep the costs of issuance low and supports product variety. And one thing that makes the Texas rule interesting from an academic perspective is that it reduced banking competition in an uneven way; it was precisely the biggest and most diversified institutions, which are not overly dependent on any single state market, that were likeliest to choose ESG policies over Texas business.

Because banking relationships in public finance tend to be very persistent, the exit of five of the biggest players was bound to be disruptive. We use historical underwriting data to calculate how reliant each municipal borrower in Texas was on the exiting banks. Although some Texas towns had never hired one of the exiting banks—like Lewisville, a 107,000-person city near Dallas—we found that the state as a whole was more like El Paso, which had used one of the exiting banks to underwrite 64 percent of its historical debt. Texas itself had used one of these five banks to underwrite more than 60 percent of its state-level debt.

We used a difference-in-differences approach to compare how borrowing outcomes evolved beginning September 1, 2021, for Texas issuers with significant previous reliance relative to the Texas governments with less reliance. The intuition behind the exercise is that borrowers who never interacted with the exiting banks are a type of control group, and they experience no, or at least much less, negative impact from the underwriter exodus from the market. Then we compared the outcomes—like borrowing costs—of the issuers with reliance on the exiting banks to see if they change relative to the outcomes of the control group.

We found that market uncertainty increases significantly for issuers with past reliance on the targeted banks. The first decision an issuer has to make when seeking public financing is whether to hire an underwriter early on to structure the underlying bonds (negotiated sale) or to skip this step and directly hold an auction (competitive sale). The former approach, negotiation, allows issuers additional flexibility to structure and time the offering. Our examination of the data showed that borrowers with more reliance on the exiting banks tend to move away from competitive sales toward negotiated sales, which is a common tactic of assuaging risk but sometimes comes at a higher average financing cost.

Second, the data show that the yields for previously reliant borrowers rise relative to the yields that comparable borrowers pay. This pattern held true even after removing daily and monthly variation in average muni bond interest rates. When examining an issuer with all of their historical borrowing underwritten by a bank that left, our estimates showed an almost 40 basis point increase in average yield to maturity from September 2021 through April 2022. When applied to the average dollar of borrowing by public entities in the state, our estimates imply that SB 13/19 caused Texas borrowers to pay at least an additional $303 million more to investors in net present value on the $32 billion in external financing in the first eight months after the laws went into effect.

This is a steep cost for ordinary Texas taxpayers to bear. Could our analysis be biased by a faulty premise—specifically, the implicit assumption that issuers in Texas previously reliant on the five targeted banks are similar to Texas issuers that do not have significant reliance on those banks? Issuers and underwriters, of course, select each other for a reason. Typically, it was the largest issuers in Texas that used to hire the targeted banks. So, could it be that their expensive change in yields was just because large issuers did worse in general all around the US in the months following September 2021? To assess that potentially confounding factor, we conducted two additional analyses, comparing the affected Texas issuers to both similar municipalities in other states and to large issuers within Texas that rarely used the targeted banks. But these analyses ended up supporting the main finding: Borrowers in Texas that lose access to their underwriters pay significantly higher yields after SB 13/19, and that pattern is not showing up in similar borrowers in or out of Texas.

As of the end of July 2022, there were 44 proposed or passed rules in 17 states to enact similar restrictions on bank behavior by restricting bank access to local markets. Our research highlights several important lessons from the trailblazing rules in Texas. First, several of the largest financial services firms are choosing their ESG policies over participating in a large market. Second, when underwriters leave, issuers face a significant increase in uncertainty and react by trying to mitigate risks. Third, despite taking actions to limit risks, municipal bond issuers experience a striking increase in borrowing costs when seeking external finance.

Whether such laws are worth the costs they impose on local residents is ultimately a question for voters and merits more study in the future. But legislators overseeing tight municipal and state budgets—or seeking to minimize tax burdens—should recognize that limiting their own borrowing options can be a surprisingly expensive way of pursuing unrelated goals.

Daniel Garrett is an assistant professor of finance at Wharton. Ivan Ivanov is a senior economist in the research division of the Federal Reserve Bank of Chicago. 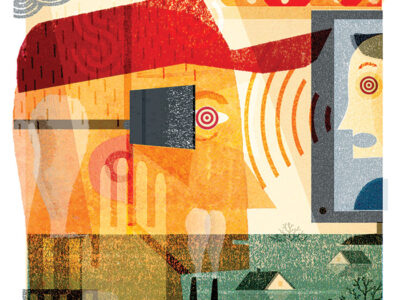