The Peace Children of Syria 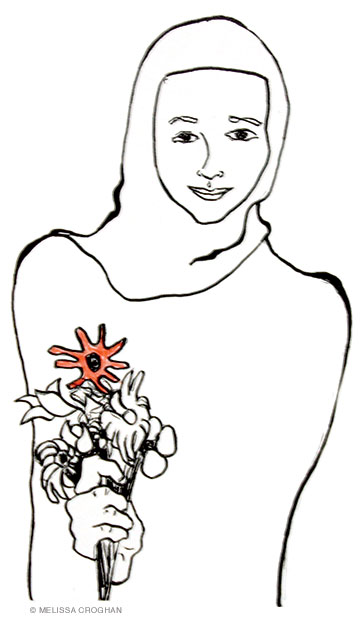 By Melissa Croghan | Last May I went to Jordan to lead art and poetry workshops for the children of refugees from Syria and Iraq who have flooded the country. I created illustrations for coloring books, designed poetry exercises, and donated art supplies. I taught 200 children, and was able to sit down and spend time with nearly every one of them.

It was a photograph I’d seen in December 2013 of displaced children at the Jordanian border that compelled me to help them. Though their eyes showed worry and sadness, their faces were cheerful, and every one of them had their hand raised in a peace sign. Despite all they had lost, these were hopeful hands. I thought of them as The Peace Children.

My daughter was a diplomat at the US Embassy in Jordan’s capital, Amman, and I reasoned that I could live with her while teaching my workshops. A contact in Jordan connected me with Caritas, a respected global humanitarian organization. Jittery but determined, I flew from JFK to Queen Alia Airport on May 3, 2015.

Caritas provided me with a car and driver, as well as a translator named Waed. I had a new site in Jordan to go to every day. On my first day teaching I met Tarek. The largest boy in the class, he had a serious countenance but wore a cheerful pink shirt. He liked to draw right off the bat, especially enjoying our inventive animal exercise. His jowly creature with wide eyes that could see all the way home to Syria drew the admiration of other students. If I had to pick one student who was benefiting from my workshop, then surely it had to be Tarek. He had dropped out of school after being bullied mercilessly for being Syrian, but despite these hardships he was keen on learning drawing techniques from me. But a half hour before the workshop ended, he abruptly rushed out of the classroom. I worried that maybe I hadn’t been a good teacher, after all—that I’d done something to chase him off.

At day’s end I climbed into the car with Waed. As we passed a nearby medical center, I recognized a familiar pink shirt. A large boy stepped out of the building’s double doors. He was pushing a wheelchair, the woman in it greatly fatigued. My window was open and I called out, “Tarek, how are you?” He beamed and shouted ‘Alhamdulillah,’ that all-purpose expression that covers everything from ‘Praise God’ to ‘Everything is good.’ Only later would I discover that Tarek left my workshop early to care for his crippled mother. People whispered that her legs were blown off in an explosion set off by ISIS.

By dinner time at my daughter’s apartment that first day, I felt let down. I wasn’t donating food or shelter to the refugees. I had no solutions to their ongoing tragedy—their homes and cultural heritage in Syria disappearing, destroyed. What audacity to think I could help! In bed late at night, I listened to the call of prayer from a nearby mosque. The music was haunting. Falling asleep, I saw Tarek’s stark eyes. And then I remembered that somber though he was, this boy had taken real pleasure in learning how to pool colors and paint a river that flowed from sky to ground.

Over the next week, each intense day raised different challenges. At the Fuheis-Latin School, set among gently undulating hills, I had between 50 and 60 refugees spread out over several classrooms. I spent my time running down long cement halls from one lot of eager kids to another. The following day I arrived at the Marj Al Hamam Melkite Church only to discover that the children did not speak Arabic, only Kurdish. Waed, who spoke Arabic and English, was upset that she would not be able to tell me what these refugees were saying.

The only place that caused me fear was Zarqa, a city some distance from Amman that also happens to be the birthplace of the founder of ISIS.

The first time we traveled there, Waed remarked in the car, “You write down everything.” True, I was scribbling away in my black notebook as sweat poured down my back. It was 102 degrees, we had no air conditioning, and we were chugging into Zarqa’s pollution-ridden, dusty downtown.

Of course I was writing, I wanted to say. How else does one cope with fear turning the blood in your veins to a slug crawl? My son-in-law had warned me the night before to keep my eyes sharp in Zarqa, even while riding in the car.

The car radiator was having problems, and we stopped at a gas station. All around us were women in black—no full faces in cheerful hijabs as in Amman. Only eyes: wary, and looking at us. But nothing happened. All was calm in my workshops.

Many of my days brought news of further destruction in the region. When working with the Iraqi children from Mosul, it was distressing to realize that their city had lost its art museum during a takeover by ISIS. The fall of the strategic Iraqi city of Ramadi brought a hush to my colleagues at Caritas. Days later, on May 19, when Palmyra in Syria was seized by the Islamic State, there was great fear among my colleagues, and all of us held our breath hoping that the historic temples of Palmyra would be left intact. (As the world now knows, our hopes were in vain.)

It was a small way to combat these horrors, but what I could offer the refugees was the gift of art, the chance to create new culture for themselves. It will be centuries before the handiwork of the most talented artists in the Middle East will qualify as heritage art, but it must start somewhere. And besides, what else is there to do when there are no jobs, and the future looks tenuous at best; what better way to survive?

I was glad to be there with paper, markers, and colored pencils to teach each day, one child at a time. No lofty goal of offering the refugee a way out of his tragedy, but perhaps with the passion of art, a way through.

Melissa Croghan G’89 Gr’92 is a writer and artist and has taught art and poetry workshops to urban children and people of all ages living in poverty.