It was the most surprising moment of the Oscars this year, at least until John Travolta’s Idina Menzel-Adele Dazeem flub. Bradley Cooper had just announced the winner for Best Documentary Feature and Morgan Neville C’89, the director/producer of 20 Feet from Stardom, rushed on stage to accept. “Thank you,” he said, and quickly acknowledged his co-producers, his wife, his two children. Then he turned the microphone over to Darlene Love and she began to sing.

The little-known singer’s powerful voice filled the Hollywood theater: I sing because I’m happy. I sing because I’m free! After a few more bars, she finished to a standing ovation. “Darlene Love stole the show,” several reporters would later write of that moment.

It wouldn’t have happened if Neville had been following the rules. Surprise cameos are not encouraged at the Oscars, nor are unrehearsed musical numbers.

“We weren’t supposed to do any of that,” he says now, “but we just went for it and it worked out great.” Just as in 20 Feet, a low-profile backup singer finally took center stage—but only after Neville’s behind-the-scenes work and planning.

It wasn’t Neville’s idea to make a movie about background singers—those overlooked folks crooning the chorus in “Sweet Home Alabama” or swaying behind Bruce Springsteen, Mick Jagger, and Sting. But when Gil Friesen, the producer and former president of A&M Records, came to Neville in 2011 with the suggestion, the filmmaker was intrigued.

“It was something I didn’t know about, and I know a lot about music,” says Neville, who spent three months interviewing background singers and mapping out the oral histories. “There was no other way to research this,” he adds. “There were no books about these singers, no documentaries, no map for what a film would be.”

In searching for his storyline in 20 Feet, Neville was drawn to several African-American women whose voices backed top classic-rock songs—who would, as he puts it, “sing with Frank Sinatra in the afternoon and Frank Zappa at night”—but who remained virtually unknown themselves. “It was the story of these black voices coming out of the churches, into the studios and onto vinyl, and how they changed music and kept changing as music changed,” he says. “That was the big story to me.”

The film opens with a figurative wink. Famous album photos float by, but there’s something different about them: a large dot has been placed over each lead singer’s face, leaving only the smiling backup singers. As Neville’s friend and frequent collaborator Robert Gordon C’83 notes, “It’s a real expression of Morgan making us take things we’ve seen many times before and see them anew.” As the photo cascade continues, Lou Reed begins to sing “Walk on the Wild Side” in the background, eventually reaching “and the colored girls go: ‘Doo da-do da-do do-do-do, doo da-do da-do do-do-do …’”

20 Feet from Stardom charts individual tales of frustration and defeat, of pride and contentment, yet there is also a broader message.

“Ultimately, the film becomes about making peace with the life you are living rather than the life you dreamt of having or the life society tells you you should be living,” Neville says. “That’s a moment that most of us have to deal with, and I think that’s what became the most relatable aspect of the film, far beyond the music. Our culture is all about elevating certain people. People who put their noses to the grindstone and do good work don’t get applauded nearly enough.”

It’s a feeling he can relate to. He made his first documentary in 1995 and has since written, directed, and produced films about Johnny Cash, Pearl Jam, Ray Charles, the Rolling Stones, Muddy Waters, and Hank Williams. The occasional non-musician subject notwithstanding, Neville says he became known as “Mr. Music Doc.” The offers for high-profile subjects and interesting projects rolled in, but recognition didn’t always follow.

“I love what I do, but it’s not a celebrity profession,” he says. “It’s always a struggle just to get films financed. It’s not an easy career path.” With 20 Feet’s success and Oscar win, he’s now gone from background singer to rock star of the documentary world. “It’s been kind of a Cinderella ride,” he admits.

Don’t expect him to go all Hollywood, though. Michael Kowalski C’89, a film professor at Chapman University and friend from Neville’s Penn days, says the filmmaker is “quiet, unassuming—the opposite of Hollywood in a very good way.

“I don’t think I’ve ever heard him brag,” Kowalski adds. “If you met him at a party, you wouldn’t think, ‘This is a guy who makes these films about popular music.’ He’s still very much the guy I met outside the 38th Street Wawa our sophomore year.”

Whether he’s documenting the modern art scene in Los Angeles (The Cool School, 2008) or the rise of singer-songwriters (Troubadors, 2011), Neville says a single thesis runs through all his work: that culture matters.

He and his company, Tremolo Productions, are now working on two new feature documentaries, both due out in 2015. The Sound of Silk follows Yo-Yo Ma’s Silk Road Ensemble, while Vidal v. Buckley re-examines the heated 1968 political debate between Gore Vidal and William F. Buckley. He’s also developing several scripted films. “We’ll see what happens,” is all he’ll say about those, but either way, “I could make documentaries forever, without a doubt.”

As for Darlene Love, her life will soon become an Oprah Winfrey Network movie. Toni Braxton will portray Love in My Name is Love: The Darlene Love Story and Neville, with whom Love entrusted her story once already, will be the executive producer. Here’s hoping that Neville’s and Love’s scene-stealing Oscars moment makes the cut. 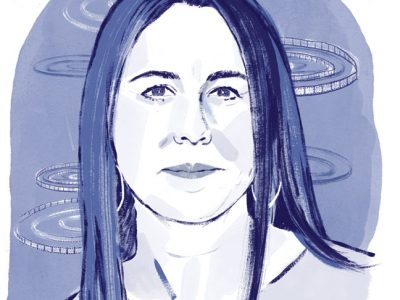