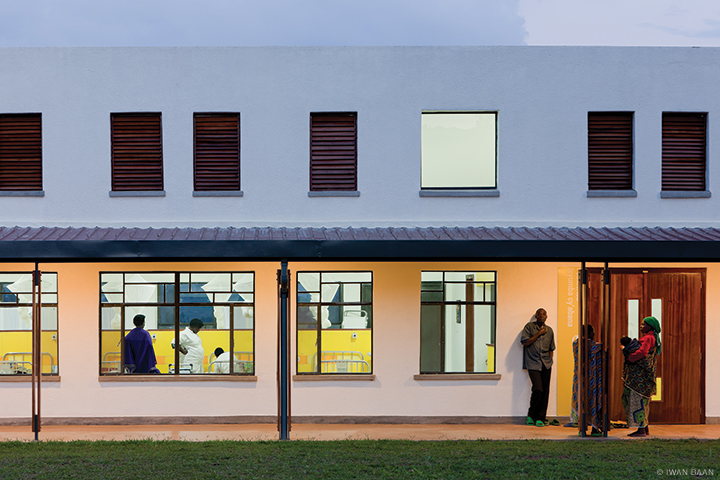 Can buildings make their occupants healthier?

We’ve all heard by now that the buildings we live and work in can make us sick. But what about the opposite? “Can a building prevent an epidemic?” asks Sierra Bainbridge GAr’04 GLA’04. “Can a building encourage people to take their medications?” “Can a building entice better doctors to join a hospital?”

Bainbridge is a senior director at MASS Design Group, a Boston-based firm with an expansive view of how architecture should be evaluated. “Architecture is never neutral,” the firm states on its website. “It either heals or hurts. Our mission is to research, build, and advocate for architecture that promotes justice and human dignity.”

In a conversation presented by Penn Praxis in late January at the Kleinman Center for Energy Policy, Bainbridge discussed the ways in which recent MASS projects attempt to carry out that mandate. The following day she met with students to discuss career paths in architecture.

“We’re very interested in finding ways that infrastructure can heal and provide dignity,” Bainbridge said, in a presentation focusing on projects in Rwanda. The firm’s 70 or so employees, she noted, fall into one of three main areas: advocacy, research (including a team of epidemiologists), and design.

Ideally, each contingent plays a substantial role in the overarching process. “We will take on any type of project—it could be a school, it could be a landscape—but it has to be mission-aligned and have some kind of impact.” Of the firm’s advocacy efforts, she said, “We work for communities that otherwise don’t have access to design and we advocate for architecture that can provide solutions.”

Ellen Neises GFA’02 GLA’02, the new executive director of Praxis, introduced Bainbridge by reminiscing about their time together at James Corner Field Operations, the landscape design firm now best known for its creation of New York’s High Line. Bainbridge landed at Field shortly after earning dual degrees in architecture and landscape architecture at Penn, where she came to realize early on that “landscape designers were working in the arena of social values in ways that architects hadn’t quite caught up to,” she said.

In 2008, Bainbridge told the audience, she took a leave of absence from Field to travel to Butaro, Rwanda. There, she worked on the landscape portion of a hospital being designed and built by MASS, which had recently been formed by two students at Harvard Design School, Michael Murphy and Alan Ricks. A year later, she joined the nascent firm full-time as its Rwanda country director, where she grew the local office to a staff of eight, designing and overseeing the implementation of MASS’s first projects, including Butaro Hospital and the Umubano School.

Part of the design brief for the hospital, which was symbolically situated on the site of an old military barracks, was to mitigate the spread of airborne diseases. Bainbridge showed how her team addressed this by reconsidering the layout of beds and reconfiguring the provision of shared services like medical oxygen. To encourage patients to get outside, the team fashioned a native tropical landscape, populated with locally sourced volcanic boulders. Bainbridge called this a critical element; the designers also “pushed all circulation out of the building through larger windows so people weren’t breathing in sick air. And instead of everyone facing inside, they faced outward.”

Besides providing a solution to the primary problem (in this case, better healthcare), this project furthered other goals that MASS pursues in its work, Bainbridge said. It helped catalyze an architectural training program in Rwanda (which has few), and incorporated dorm-style housing that attracted and retained medical professionals by offering them an inviting and restful place to live.

Bainbridge cited Giancarlo De Carlo, the socialist Italian architect she called the “patron saint of MASS” as she showed a slide bearing a quote from his journal Space and Society: “Contemporary architecture tends to produce objects while its real role should be that of generating processes.” The MASS process, Bainbridge said, aims to make architecture responsive to a wider set of goals.

She concluded her presentation by explaining the firm’s commitment to the concept of One Health, defined by the Centers for Disease Control as the recognition that the “health of people is connected to the health of animals and the environment.” For Bainbridge, the concept dovetails with her first love, landscape design.

“This is about taking the idea that landscape can heal to larger levels,” she said. “It can affect areas like climate change, regionalism, agriculture, deforestation, biodiversity, endangered wetlands, natural disasters like mudslides, and public health. We believe that One Health is the way to go.” 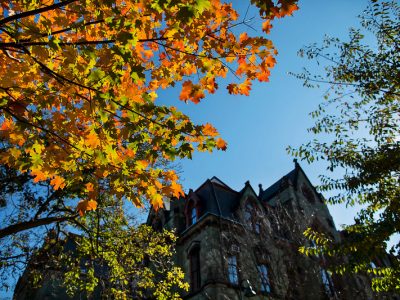