The pandemic, the stovetop, and going beyond family ties.

I don’t even like the idea of rice pudding. The texture makes me gag. But as I followed a Nepali recipe meant to nourish new mothers, I was comforted by the smells of ginger and cinnamon filling my apartment and energized by my new mission.

It was July, a few months into the pandemic, and a routine I’d begun in mid-March had taken a beautiful turn. I was no longer spending weekends cooking for a pregnant woman. My younger friend Misa had just given birth to a healthy baby girl, Kimi, and I was pouring my heart into creating meals for the new parents instead. The rice pudding had proven such a hit that her husband started eating it too, and they requested it for the next few weeks.

When the lockdown hit, so many of us were physically separated from older and younger relatives. The way to show love was to stay away, especially from those who didn’t live nearby. Yet that left a void, and the urge to fill it cemented a link between Misa and me.

We met about 15 years ago. Misa was a twentysomething in her first job facilitating workshops for the Posse Foundation, which helps high-achieving students from under-resourced schools attend college. I was in my early 40s, a lawyer turned journalist/teacher looking for a rewarding volunteer gig. I’m a first-generation college graduate, and Posse’s mission spoke to me.

Misa sought me out, looking for a mentor. I was craving connection to younger people in New York, where community can be hard to find. She reminded me of myself in my first job: so determined to make a difference, seeking out women who seemed to have it figured out.

We met for coffee and got close quickly. I listened, offered advice about work, invited her to networking events, and made introductions. In return she included me in her world, making me feel relevant and up to date. We clicked.

I have a sweet spot for twentysomethings. And before long Misa introduced me to a slew of them. I was drawn to her crowd, a crew of practical idealists who were determined to fix all that’s broken in our world and smart enough to get it done.

I’m now 54 and a lot of my life feels settled. These days I find that I’m going deeper rather than constantly shaking things up.

In contrast, every few months Misa and her husband Nico take another big step on life’s journey—creating roots, building a home, a community, a family. As they went about all that amidst the turmoil of 2020, their commitment to planning and building lifted my spirits. In the face of all that chaos, they remained focused on a clear and grounding goal: to stay healthy and safe for their child. Their cocoon is so far from their parents, who live abroad, and siblings, who live in distant states. Yet I live only a few miles away. That proximity turned us into COVID neighbors. Outside of my husband and mother, and a few neighbors, Misa has been one of the only people I’ve seen regularly.

As someone whose work relates to aging, I can’t help putting a name to what’s going on with us. Though our rapport is easy, I’m always aware of the age gap between us. I believe that a critical part of aging well is what the psychologist Erik Erikson called “generativity”—investing in something that will live beyond us, whether that is younger people or other kinds of legacy. Parents practice generativity naturally through their children and grandchildren. But for the increasingly large cohort of us who hit midlife without kids of our own, connecting with younger generations has to be an intentional act.

Which gets me back to the rice pudding. My cooking for Misa grew out of a ritual to stay connected to my own family. Within the first few weeks of lockdown, my 79-year-old mom in New Jersey and my 14-year-old nephew Manny in Florida decided to meet up on Zoom one Sunday to cook together. Cooking was one of their favorite in-person activities. Manny has a passion for it and wanted to learn some of the family recipes. My brother and I join on many Sundays. But seven months later, my nephew and mother have barely missed a single week of “Meals with Mema.”

When I texted photos of our meals to Misa, she asked if she could place an order for lasagna—plus avocados, almonds, and a few other items that her regular grocery purveyor lacked. Thus my pandemic deliveries began.

For the first few weeks, I’d package up part of what I cooked with Mom and Manny, shop in a nearby market where I felt safe, then carry the items to Misa’s apartment, two miles away. I didn’t want to take a taxi or the subway, so I was dependent on good weather and my own two feet. Over time, I started cooking things I knew Misa and Nico would like, separate from the meals we made in our family Zoom sessions.

This led to a series of firsts for me. I took my first bicycle rideshare as a way to make deliveries easier. Cycling opened a whole new way of seeing New York City, one I may have never tried had I not been committed to getting to Misa in a way that felt COVID-safe.

I took my first pandemic taxi ride for a food delivery. It was raining and my usual methods wouldn’t work. Once inside the cab, I realized that between the partition, masks, and open windows, being in a taxi was no more dangerous than a masked conversation on the street. I’m now taking taxis regularly.

I embraced another first: letting my hair go gray. It felt like an appropriate moment to wear my age a bit more proudly. As my friend the longevity expert Ken Dychtwald recently quipped in the New York Times, it’s a good time to be “useful more than youthful.”

This was a time, too, of new perspective. When I was in my thirties and many of my peers were consumed with having babies, I struggled through a 10-year marriage with a man who couldn’t commit to having children. The question of whether I would become a mother loomed over me like a constant cloud. I could barely attend a baby shower or birthday party without falling apart. I skipped a good number of them, sparing myself the pain. Yet here I was itching to be involved in Misa’s new family. A baby shower over Zoom. Visits at the doorway and distanced chats while sitting on our favorite bench. Pushing Kimi around and around the block in her carriage so that her mother could run upstairs and eat. Delivering pastries and packing boxes for their move to a new apartment.

There’s no doubt that I was making one family’s life a touch easier—but the deeper truth is that all of it, especially the food, has been as much for me as it has been for them. Many people have gotten the same lift from connecting with strangers across generations. My mother and Manny, for example, regularly deliver their extra food—in person—to older neighbors who don’t have family nearby.

I never thought I’d say this, but now that Misa has moved beyond her new mom diet, I miss rice pudding. I’m comfortable with the idea that I’ll never have kids and grandchildren of my own. But I have a taste of what it feels—and smells—like to nourish the next generation, something that will stay with me long after the days of physical distancing are over. 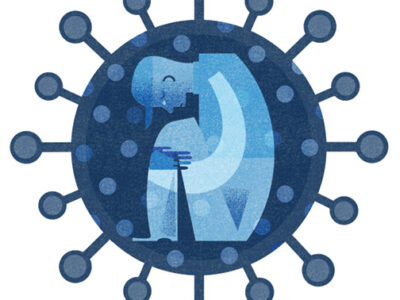