Housing activists shouted down President Magill during her welcome message to first-year students.

Penn President M. Elizabeth “Liz” Magill’s first speech to students was all about productive disagreement. But when the she stood in front of College Hall during this year’s Convocation, she may have encountered a little more “disagreement” than she had bargained for.

During the late-August ceremony to welcome the Class of 2026, protestors converged on Locust Walk and interrupted Magill’s speech on behalf of the mostly Black and low-income Philadelphians fighting displacement from the University City Townhomes on the 3900 block of Market Street. The management company of the 70-unit rental complex just north of Penn’s campus announced plans last year to sell the property to a developer instead of renewing its 40-year housing contract with the US Department of Housing and Urban Development (HUD), leaving its residents with a deadline to find new homes.

Although the University has no direct involvement with the townhomes and has pledged not to purchase the property, the UC Townhomes protestors held up signs that read “Penn Is Displacing Black Families” and “Black Bottom Reparations”—a callback to 1960s-era urban renewal projects that displaced residents in West Philadelphia, including the neighborhood once known as “Black Bottom” where the UC Townhomes have stood since 1982.

In a guest column published in the Daily Pennsylvanian on September 29, Penn Senior Executive Vice President Craig Carnaroli W’85 wrote that Penn representatives have talked with IBID Associates, which owns the UC Townhomes, about “treating Townhome residents respectfully” during the relocation assistance process. And in the future, he wrote, the University “will be among the parties working to increase the supply of quality affordable housing in West Philadelphia”—through a partnership with an organization called Rebuilding Together Philadelphia (which transforms vulnerable, owner-occupied houses into safe, healthy, and energy-efficient homes) and by commissioning a study from the Penn Institute for Urban Research that would explore university-community partnerships.

Protestors from the Save the UC Townhomes Coalition had previously disrupted a talk at Irvine Auditorium between then interim Penn President Wendell Pritchett Gr’97 and Ken Burns in April [“Gazetteer,” Jul|Aug 2022], and have organized marches, encampments, and a September rally outside of Philadelphia’s City Hall.

During Penn’s Convocation, Magill was able to continue her remarks, which she also recorded without interruption inside College Hall, and expressed solidarity with the some 2,400 students in the Class of 2026. “As you may know,” she said, “it’s my new University, too.” She then touted the “most diverse class ever assembled at Convocation” with students coming from 84 countries, 49 states (including one from North Dakota, where Magill grew up), Washington, DC, Puerto Rico, the US Virgin Islands, and American Samoa.

“Thanks to this diversity, your time at Penn may be one of the most unique opportunities you have ever had or will ever have,” Magill said. “You have the opportunity to learn everything you can about one another and to seek out those who are very different from you. You will also—and this is important—have plenty of opportunity to disagree.”

Magill went on to praise Ruth Bader Ginsburg, the late Supreme Court Justice for whom she once clerked, for always trying to understand the other side’s argument, particularly with her “staunch opponent and good friend” Antonin Scalia. “Why does this matter to us?” she asked the crowd. “Our willingness and our ability to engage with and understand views different from our own, to hear out ideas we disagree with, and to be humble enough to rethink our own views and question orthodoxies—this is essential.”

“Be open to others who are very different from you in all sorts of ways,” Magill continued. “Hone your skills and your appetite for listening, learning, and yes, productive disagreement. Seek chances to engage in good faith across divides and differences. It’s not just your personal growth and Penn’s academic mission that depend on it. The fate of our world may as well.” —DZ 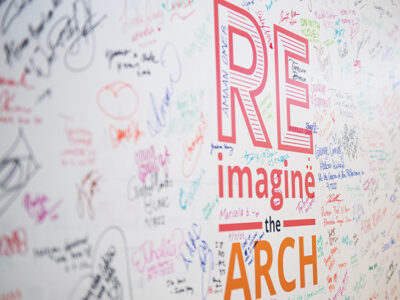 Campus
A New Vision for an Old Building